Eternal Recurrence of the Same

Composed of ten panels, the complete work measures seventy feet wide and has an impressive presence. This unique, narrative, timeline art installation describes the origins of the known universe. This work is available for sale or exhibit. Please contact Beth Neville for details.
(Drag to scroll the panoramic view below, viewing the work’s entirety)

Eternal Recurrence of the Same is my first monumental painting. The complete story behind the painting is recorded in the artist’s diary that I kept while conceiving the idea behind the images and executing them. The acrylic painting, (5 feet high by 70 feet long) is part of a trilogy that includes Caves to Cosmos. A third segment is planned based on the DNA strand as a motif. Below is a summary of the major themes addressed in Eternal Recurrence of the Same.

The overarching theme is creativity on many levels. On the most basic level, mountains and volcanoes change physically as part of Earth’s geological creativity. On the second level, the eroding and exploding mountains symbolize the artist’s personal creative efforts to dream new ideas, to execute them, and to evaluate them after they are completed. On this level the actual tension of thinking, the tiring physical work of painting, and the exhaustion and usual let down after completing a work are depicted. On the third level, the mountains’ metamorphosis from quiescent old ranges to new volcanic peaks symbolizes the human creative cycle of birth, active mature life, and death. And finally, on the fourth level, the creation of the cosmos is symbolized: its fiery birth, expansion, and potential for a future implosive death of “time.” If one believes in a Divine Creator of the entire cosmos, as I do, the creator can be imagined as the force behind nature depicted in Eternal Recurrence of the Same. 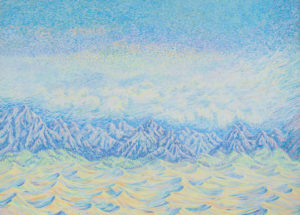 Old mountains, a blend of images of the Wasatch Range in Utah and the Catskill Mountains in New York State, are centrally placed in the canvas. Above them a placid summer sky with a few cumulous clouds is depicted. Below, the foothills of the mountains are dotted with an evergreen forest. The bottom quadrant displays a potent symbol for death, the Great White Sands National Park, where mounds of pulverized gypsum form graceful peaks and valleys. All is quiet, peaceful and almost timeless. 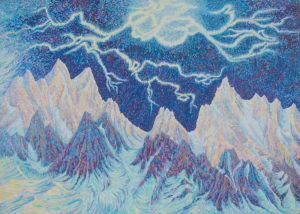 The creative spark for change is symbolized by the lightning strike. The calm mountains of the previous panel have risen to become surreal jagged peaks, the distant ones illuminated by a divine lightning strike. Valleys filled with glaciers separate the foreground peaks. The hot drifting white sand dunes have been gradually transformed into curves of cold blue ice. 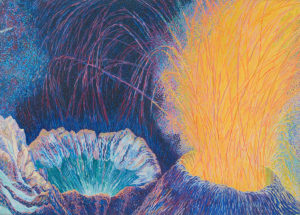 The icy valleys lead into a huge cold caldera on the left, its open maw filled with green glacial striations, pulling the viewer down to an unknown fate. On the right a blazing hot caldera spews forth a giant volcanic shower of sparks and fire extending across 17 feet of canvas on three panels. 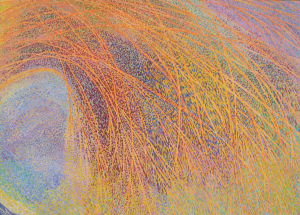 Painted in luminous, vivid colors that range across the entire artist’s palette, the fire–fall leads directly to the 5th panel. The Fire Fall motif is similar to the Rainbow in Caves to Cosmos, and has been depicted in several Earth, Air, Fire, Water paintings and in my drawings and scrolls. 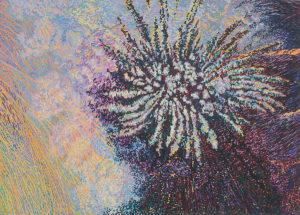 Painted when the space shuttle Challenger exploded killing all astronauts on board, the explosion is the painting’s most dynamic and central image. It is painted in the most original coloration of all the panels, including intense red/green hues as well as soft pastel pink/lavender pairings. At the lower right, the colors and brush strokes are reminiscent of stained glass at Chartres Cathedral. 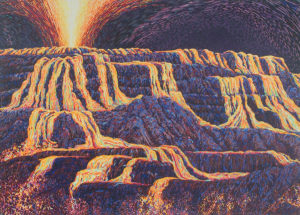 Based on an earlier painting in the Earth, Air, Fire, Water series, Lava Flow depicts the type of volcanic activity seen in Hawaii, where molten lava descends over the countryside down to the sea. This version is far more painterly that my earlier work, especially in the dark areas. Instead of using only black, the dark areas are lively combinations of deep blues, maroons, and velvety blacks. Occasional flecks of red and green further intensify the coloring. Above the flowing lava, a fire jets upward with sparks blowing to the right, leading into the next volcanic panel. 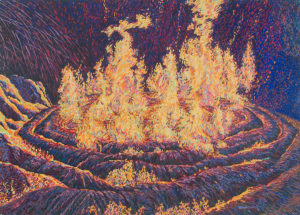 Robert Smithson’s famous earthwork, Spiral Jetty, is the geological image for the spiral of earth in flames. More fanciful than Lava Flow, the jetty dances with fire. The leaping flames above the spiral were painted to resemble women dancing in wild gyrations. Passion, intensity, and creative activity are all symbolized by the two lava paintings. This is the culmination of creativity. 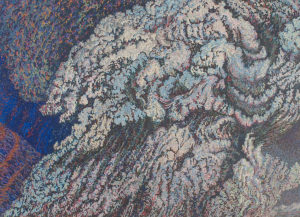 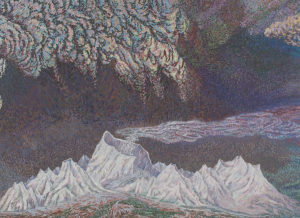 Ash Cloud is based on the photos of Mt. St. Helen’s deadly volcanic outburst. I had previously made many works of art about Mt. St. Helens including drawings, etchings, monoprints and scrolls. Nevada del Ruiz, a volcano in South America, is one of those incredible human tragedies that few people remember despite the fact that in the explosion 25,000 people died in a slide of boiling earth. No one was left alive to grieve and the bodies were entombed in mud. The Ash Cloud and Navada del Ruiz symbolize decline, decay, depression and death on four levels: 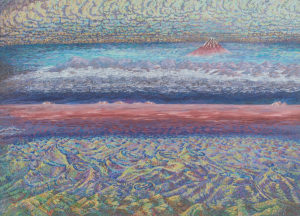 Being somewhat of an optimist I do not want to end my creation on such a negative note. Mountains change; new generations of artists emerge; grandchildren are born and become creative adults; and the Cosmos? We don’t know the End of God’s Creation. Will time cease, as reported in the New York Times, 2/17/04? Or will everything compress into a Black Hole? Or expand forever, drifting farther and farther into a chaotic unknowable universe? Or is our knowledge, based on explorations by Hubble, Mars’ Rovers, and Cosmic Background Radiation satellites, about one small universe inside others, sort of a Russian nesting–universe doll? I don’t know. The last panel contains both positive and negative imagery. From the top: The mechanistic clouds are similar to those I remember from childhood when horrible weather was on the way with winds that would blow barns down. The clouds are painted with ugly yellow and purple colors. Next, a more positive image; the Red Fuji, a quotation from Japanese prints, juts above my beloved Catskill Mountains. Rip Van Winkle, the old man in the mountain, is seen to the left in the ancient mountain range. Its foothills are covered by a soft fog gathering over the Hudson River. This is a vision I saw every Fall from the windows of Hudson High School. Below, the fog dissipates into an azure sky that is a background for the “Red Desert.” Based on my memory of driving East away from the Rocky Mountains, the increasingly aired land becomes more barren and deathly. Below the “Red Dessert” is a bizarre section of painting. A veritable forest of caldera is entwined in some neurotic landscape for a disturbed soul, the twisted caldera presenting an impenetrable landscape to the deranged traveler. But, behold, the caldera evolve into gentle farm hills and fields; fertile, golden, grassy, and abundant with life. The fields are painted with the same technique and imagery with which I made my first oil painting at age l3, while sitting on the patio of my parent’s apple farm. Thus, Eternal Recurrence of the Same ends with a wide range of emotions and future possibilities.