My most recent sculpture is the installation “Circle of Life” (#02-05). It combines many of my media interests: etching, drawing, computer graphics/printing, collage, painting, sculpture, and craft. In the future I intend to reconfigure it with photographs of people from Milton, replacing my Smith 1959 classmates’ photos.

In 1969 my husband and I moved from the Bronx to a huge old mansion in Yonkers, NY. It had a basement large enough for an art workshop. There I could store and manage wood, saws, and clamps, to assemble wood sculptures. At that time everyone was throwing out old furniture and replacing it with “modern” items. New York City was a dangerous mess, and so were the streets where workers and homeowners just dumped “stuff.” I would drive around the city and spot all kinds of kinky and beautiful pieces of wood, from hat racks and game-tables to chairs and industrial wood spools. (See #06-47.) I’d put on the car brakes, run out and pick them up. I discovered great inspiration in these “found objects.” Louise Nevelson’s wood sculptures were also an inspiration, but I took the sculptures in a different direction with the application of paint/patinas, photographs and a specific symbolism.

At this time I was also producing large photomontages using the colorful journalism pages of Life Magazine. So it was a natural step to design a symbol-system for each wood sculpture and enhance the structure with photographs. The sculptures were well received and I earned juried prizes for them, as well as sales. The strongest works are protest-art against the Vietnam War (#19-23). Susan Dey, the TV actress, was one of the buyers. After our move to a house in Centerport, NY, with its smaller studio space, it became more difficult to produce large-scale sculptures and in 1980 my creative work took a new direction. I turned my efforts to large-scale acrylic paintings and intaglio etchings.

In 2008, I turned back to the wood sculptures I owned and reconfigured several of them. Winning First Prize at the “Arts-Worcester Gallery,” “Worcester-Gears” employed an old sculpture (#01). I repainted it and applied historic photos of that city’s industrial past. The “Saw” (#17-18) morphed into another work featuring Worcester’s industrial hey-day (#12-14). “Sailing to Newport”(#34) is another reconfiguration of an older work. In the future I plan to rework “S.O.S.” (#35) and “Mountains” (#40). A small sculpture, “Mille Fleur Tapestry” (#33), based on golden Gothic arches, a gift from Dr. Ann Orlov, is a viewer favorite. 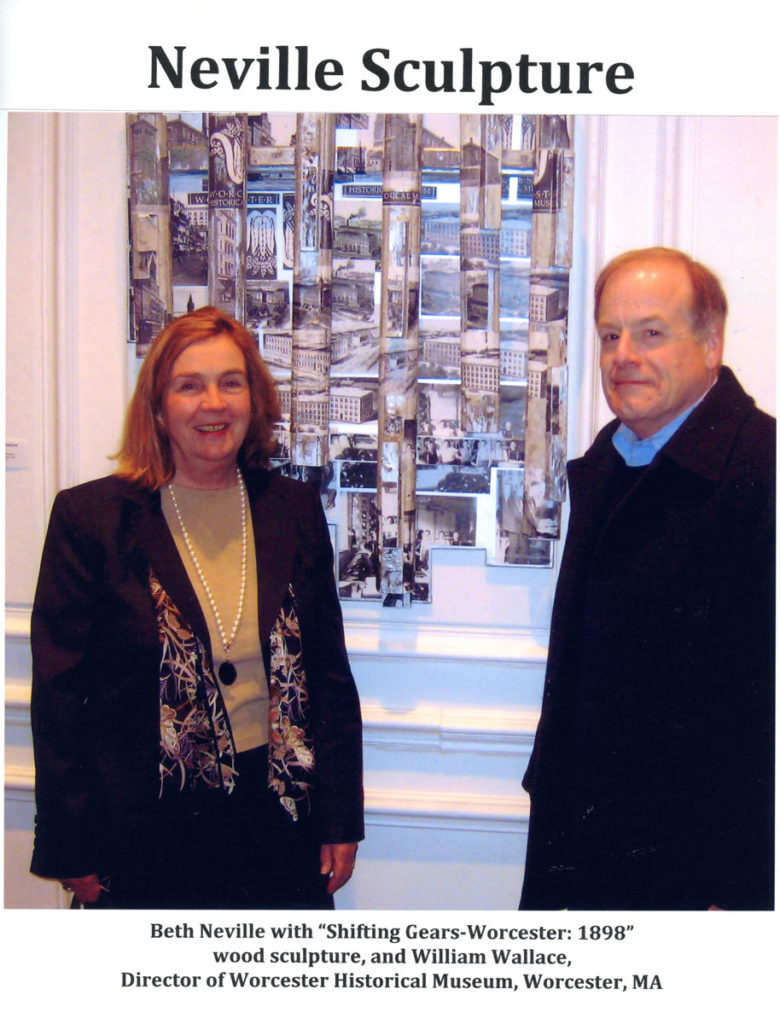 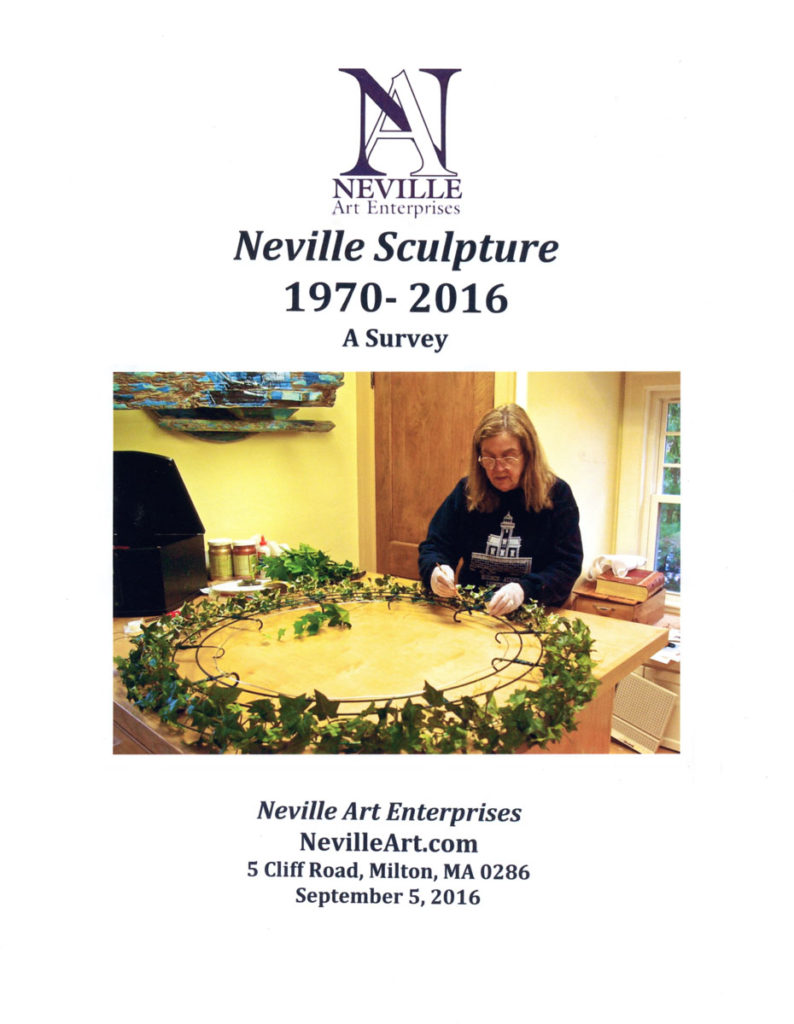 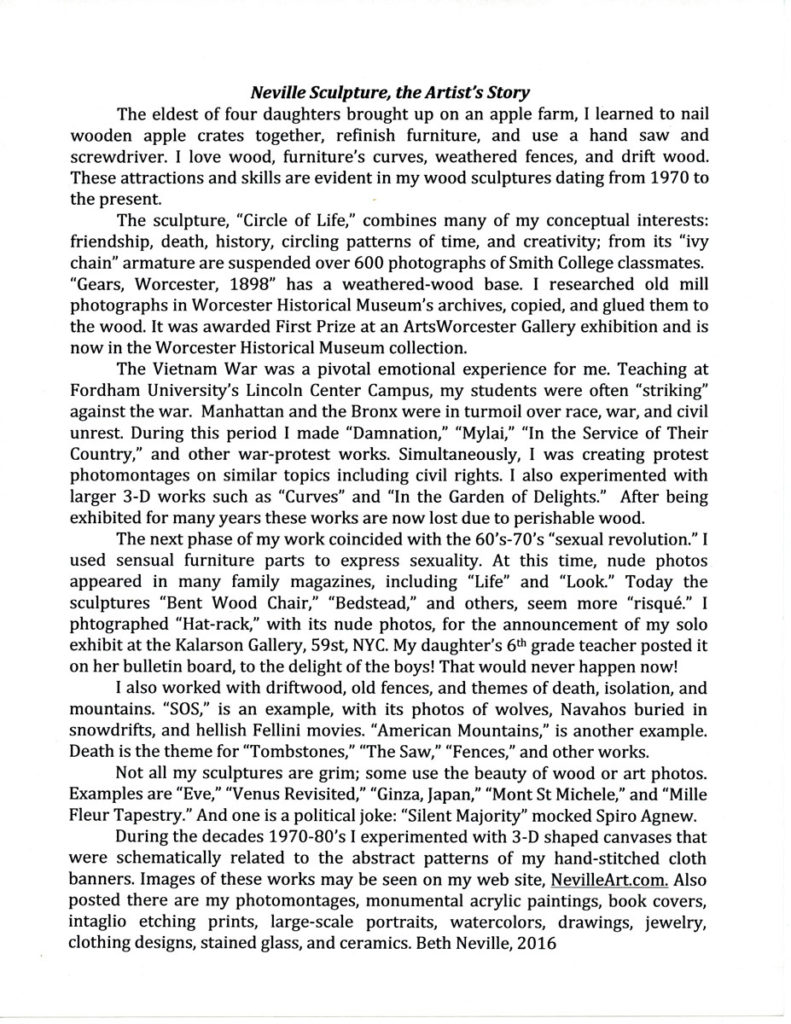 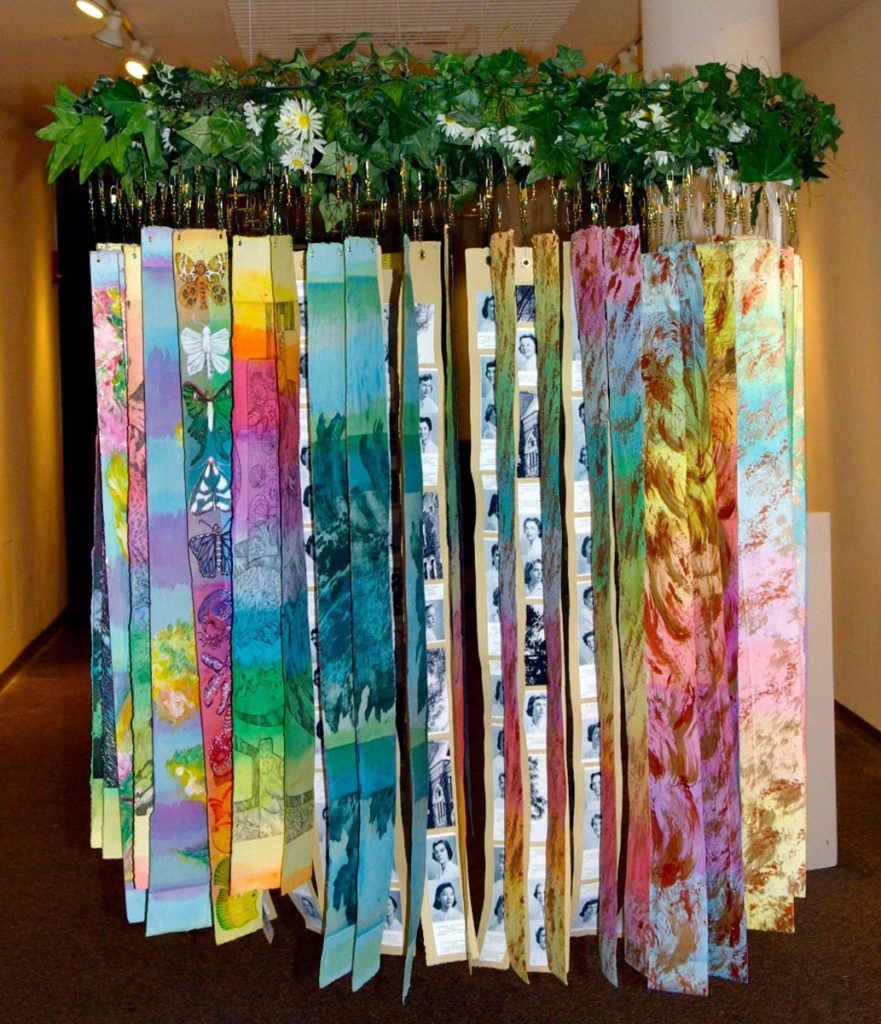 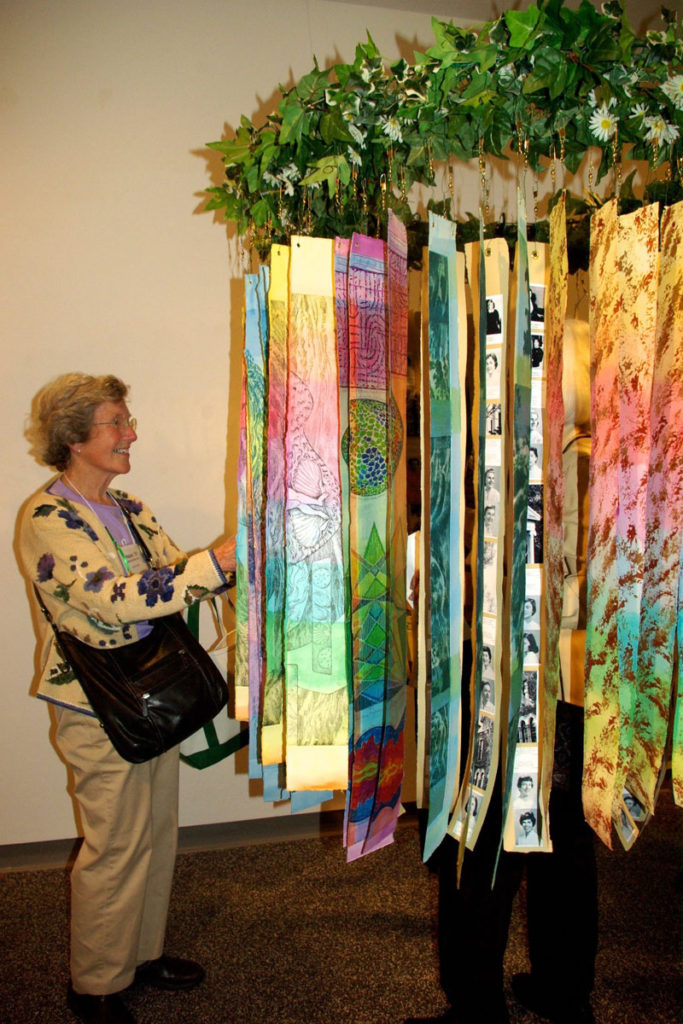 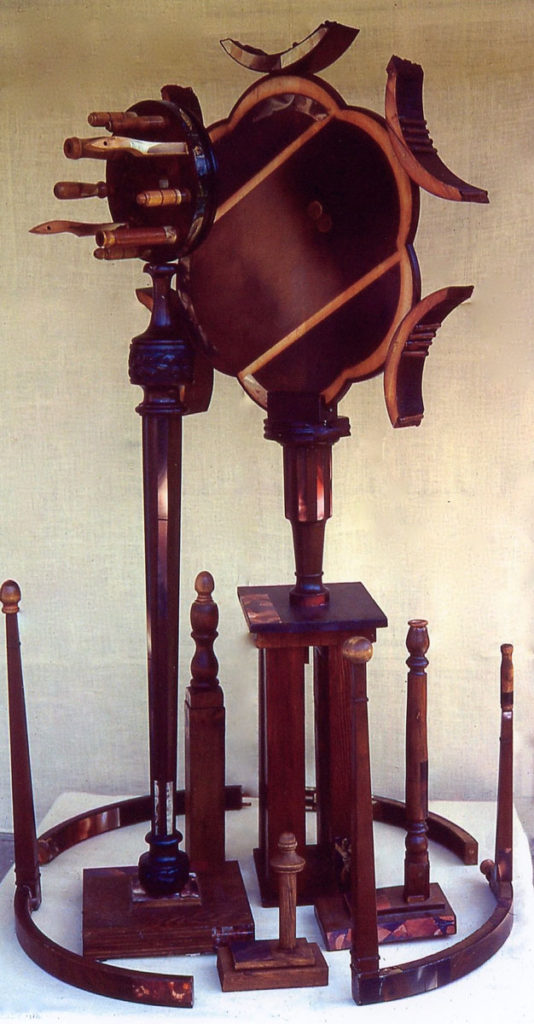 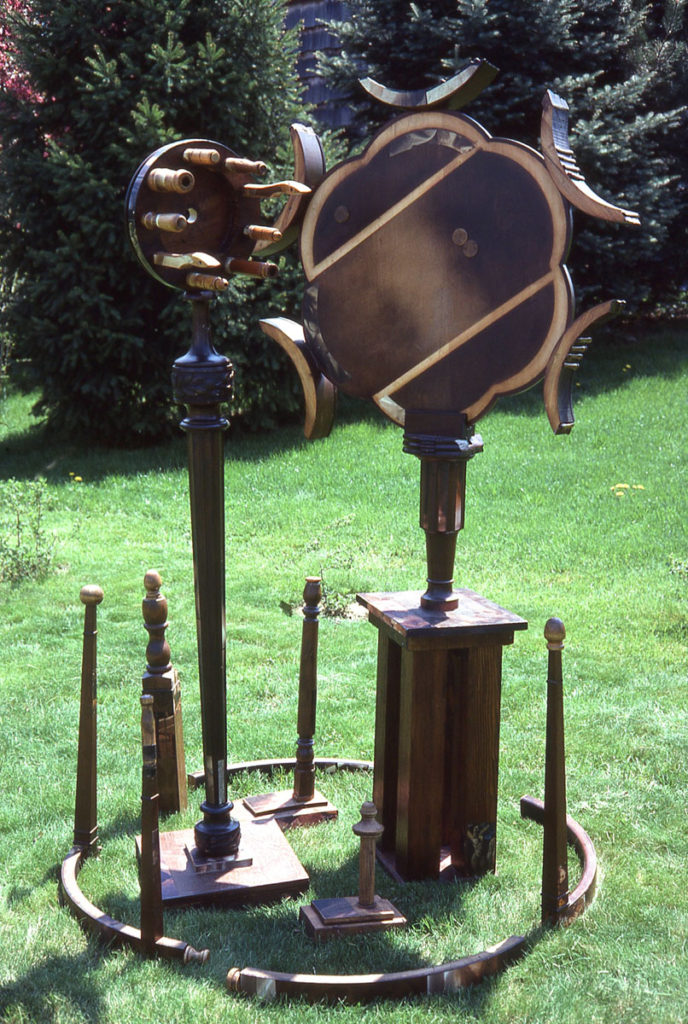 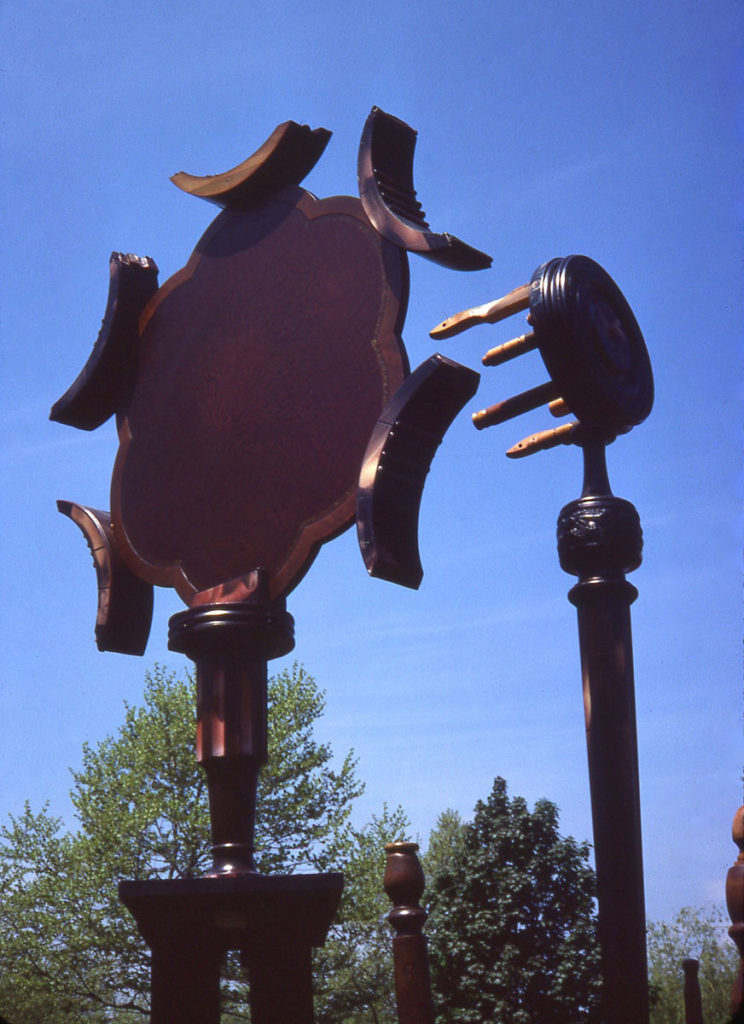 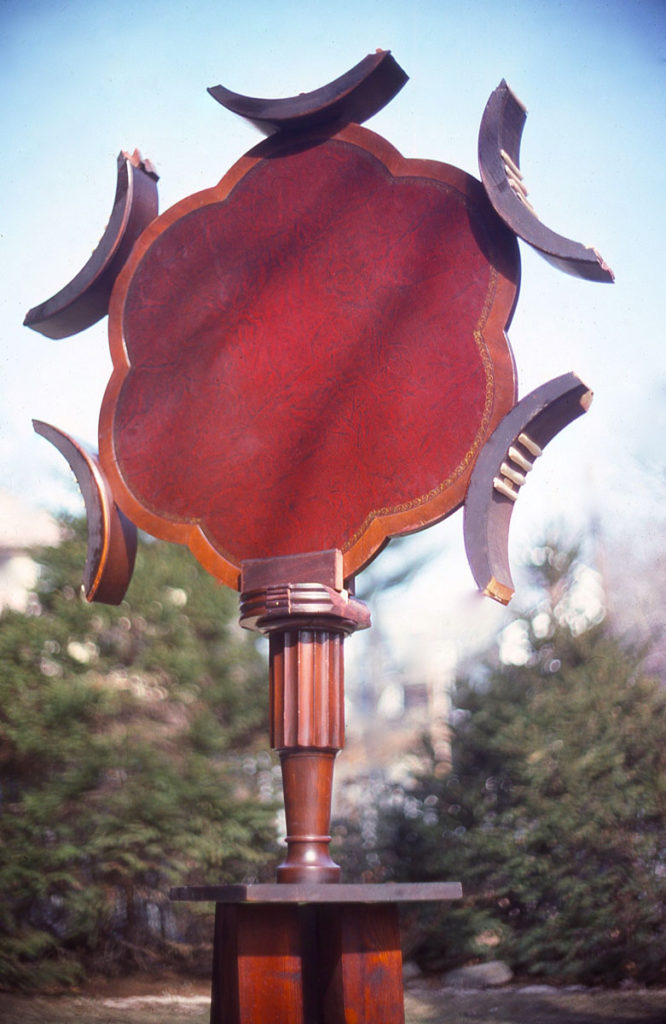 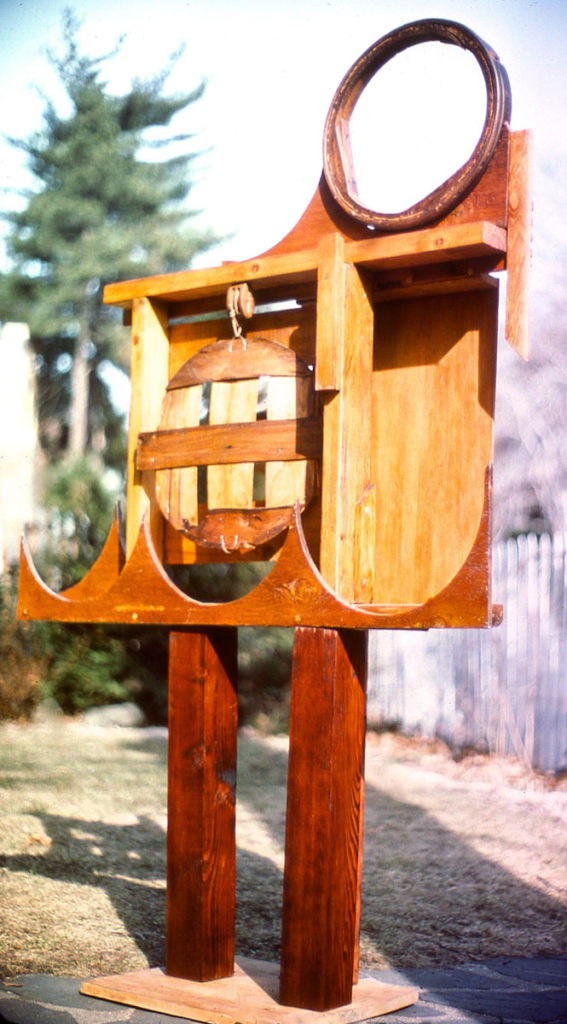 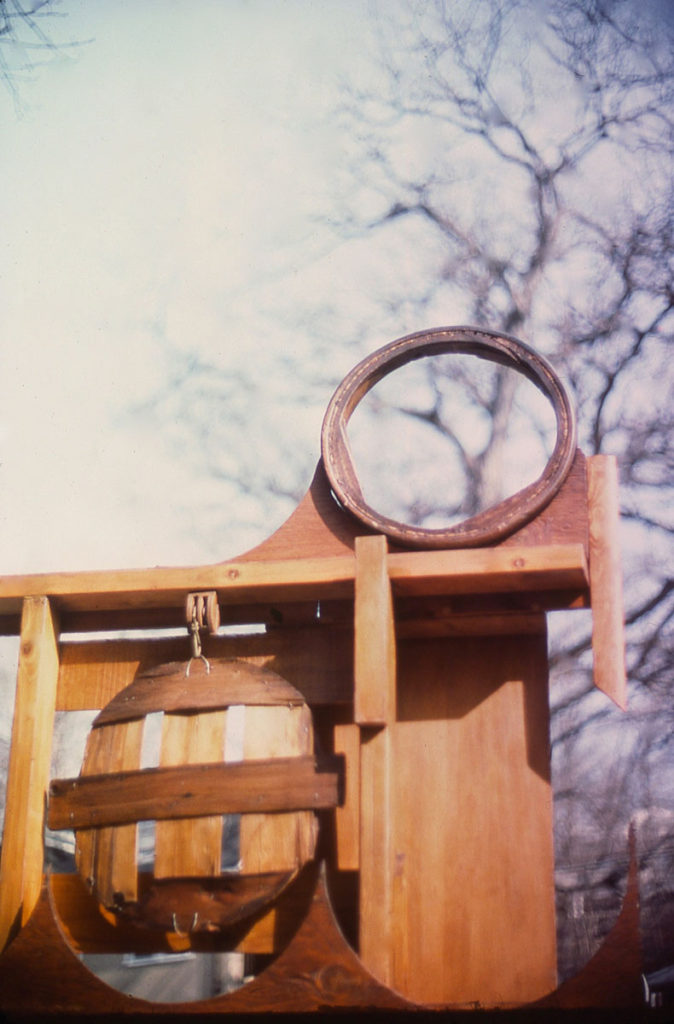 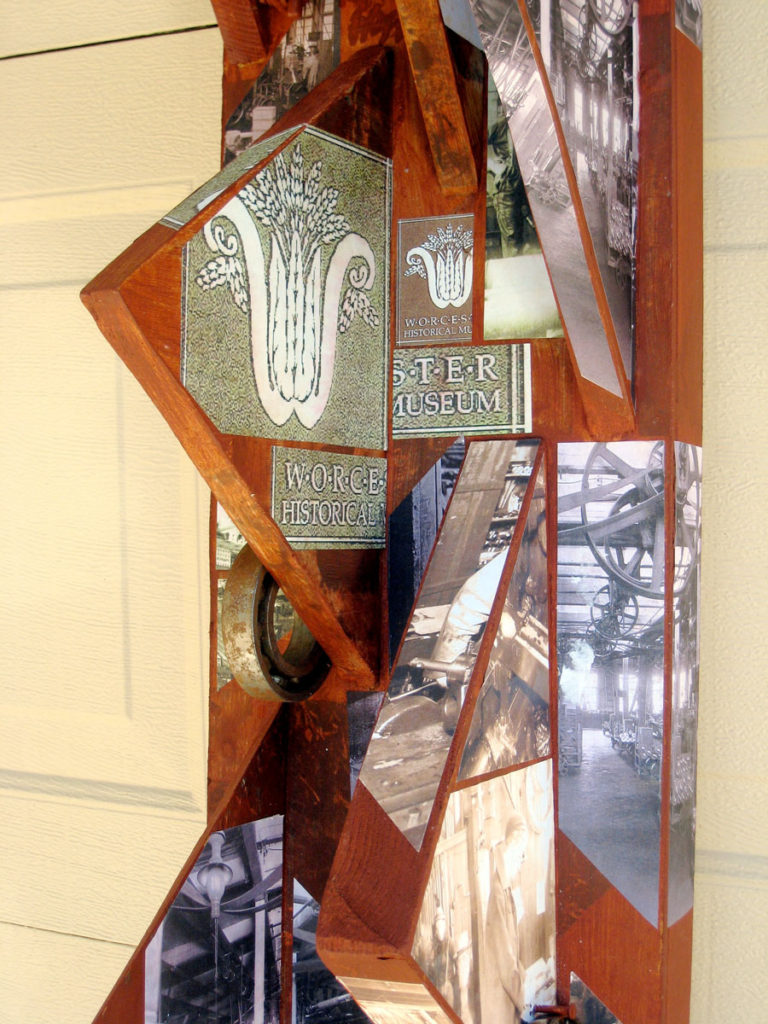 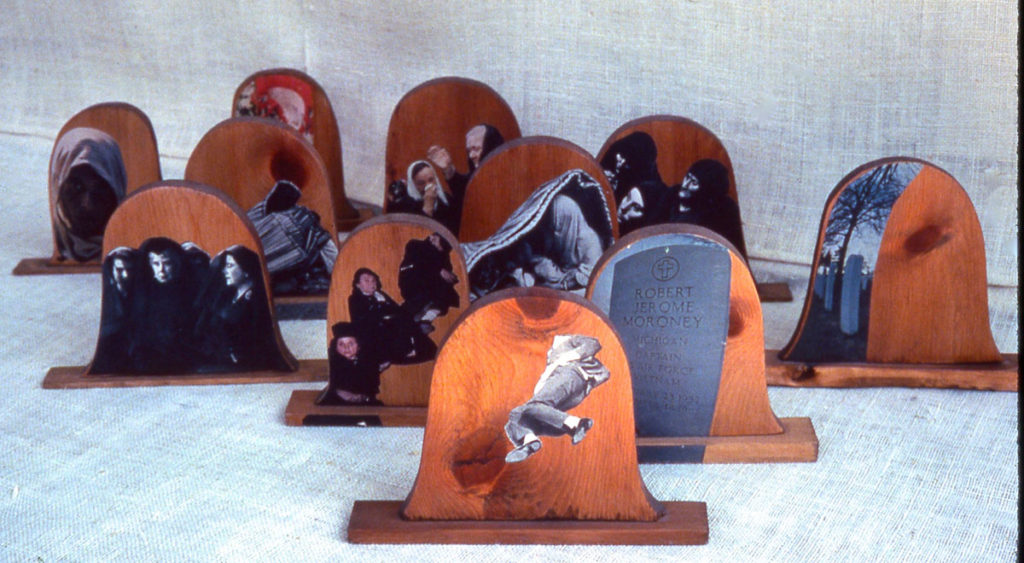 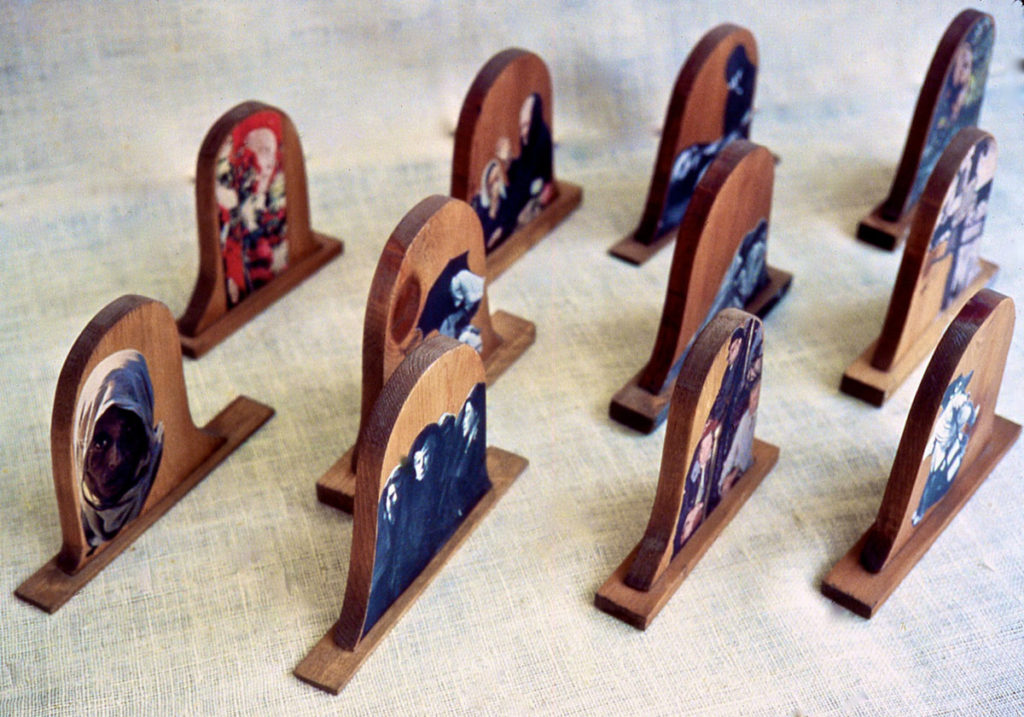 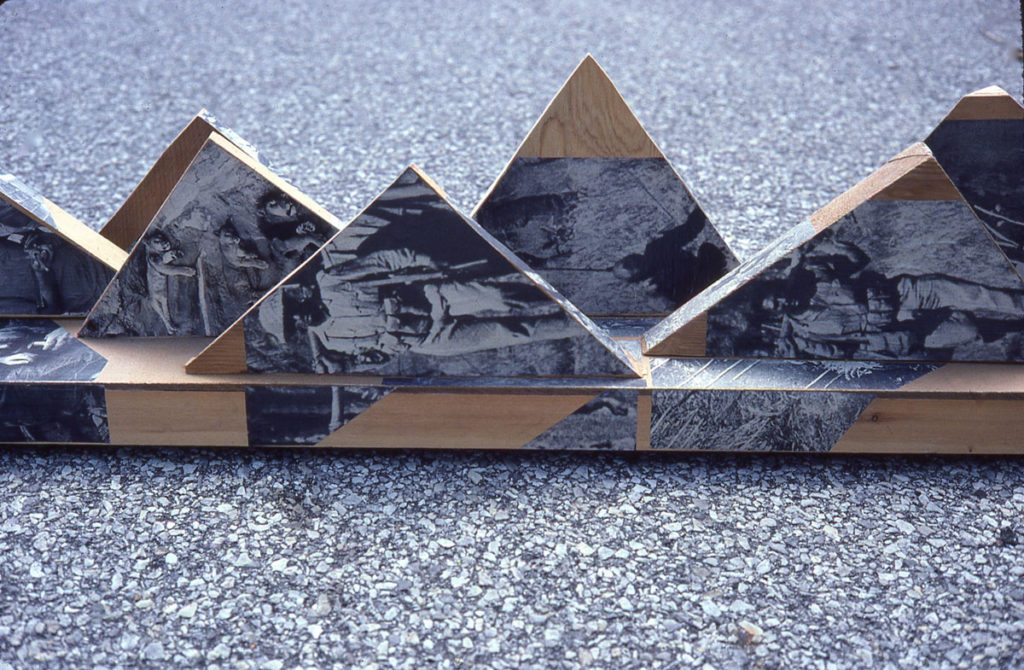 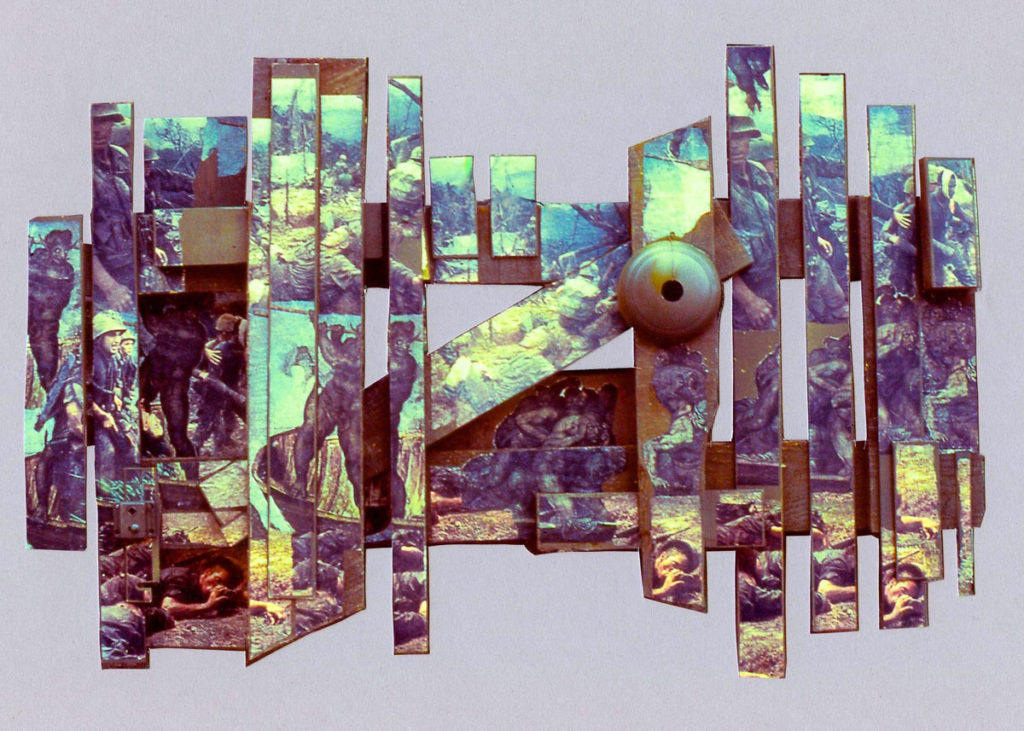 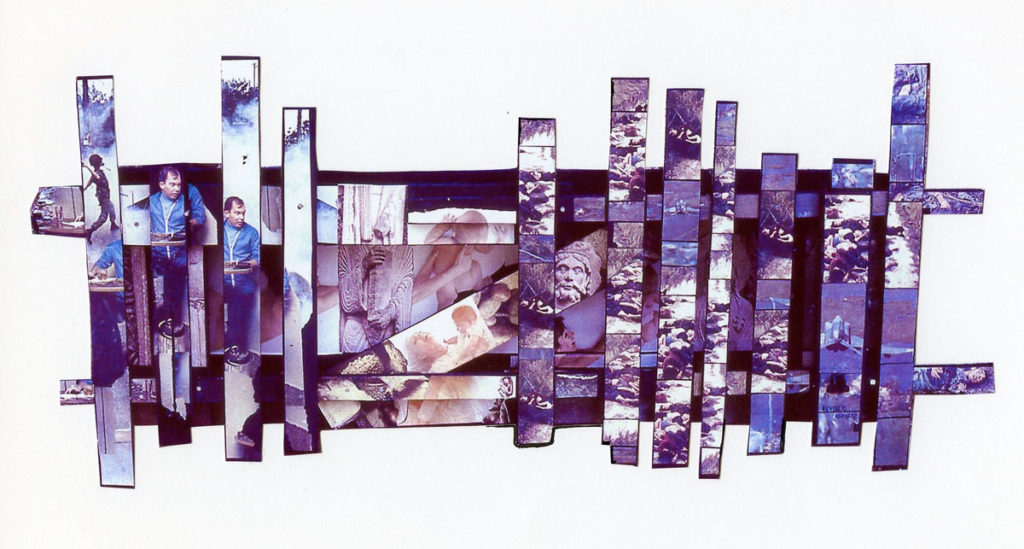 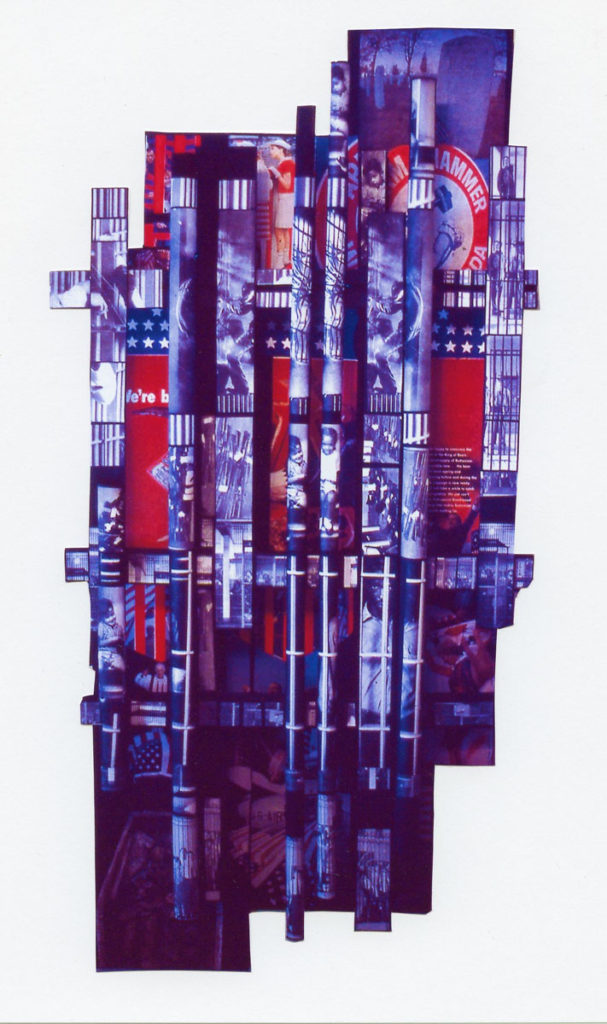 21 "In Service of Their Country,"cardboard tubes, slats, found wood, paint, photographs,
h 54" x w 2'
1 2 3 Next »
Many of the works on this site are available for exhibition or sale. Please contact the artist for additional information.