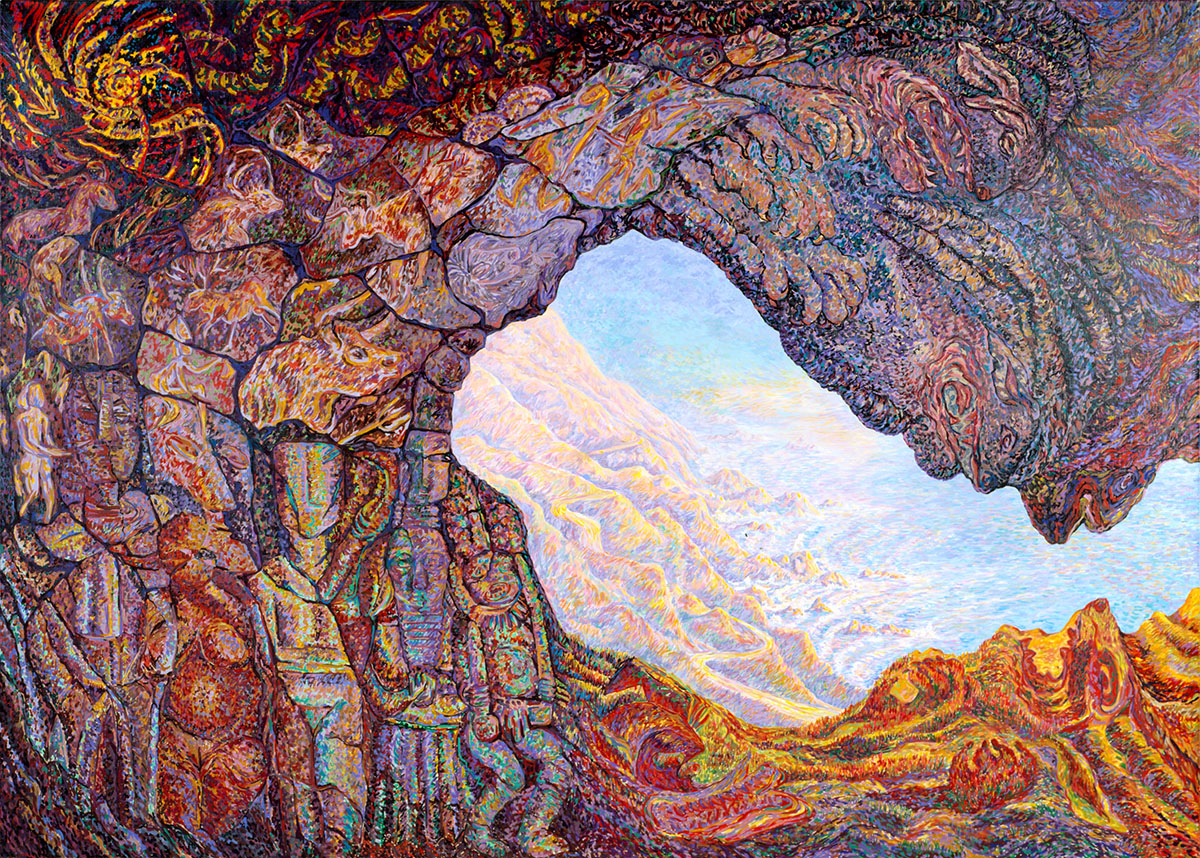 Beth Neville began to create art in childhood and continues her creativity five decades later. Her endeavors include life–size oil portraits, metaphorical landscape murals up to 70 feet in length, photomontages about social issues, and watercolors of cities and landscapes around the world.Other creative works include book illustrations in pen and ink, and book covers for philosophy and theology texts. She has formed ceramic pots and sculpture, sewn dresses of her own design, made stained glass windows, created large wood sculptures out of found objects and photographs, and assembled large scale photomontages from magazine photographs. Neville has printed intaglio etchings based on her precise drawings, sewn hundreds of cloth pieces into banners, designed and cultivated gardens, and photographed them. These activities weave together for her in a continuous flow of creativity. Each new medium enriches her ideas and increases her skills in the arts previously explored.

Neville majored in studio art and art history at Smith College (B.A. 1959) studying with Leonard Baskin (sculptor/print maker) and Henry Russell Hitchcock (history of architecture). In 1959 she was elected to the Alpha Phi Kappa XI, Honorary Arts Society, Smith College, Northampton, MA. She completed her art training with a Master of Arts in Teaching from Harvard University (M.A.T. 1961) studying with the legendary art connoisseur Jacob Rosenburg.

For four decades Neville has taught art students to create and execute their own artistic visions and to evaluate the results. In private classes, public schools, colleges, universities, and senior centers, students as young as three and as old as 90 have studied with her to improve their appreciation for art history, painting, sculpture, and crafts.

Neville conducts limited enrollment, intensive art instruction for teens and pre-teens in her home studio during the month of July. Additional information concerning that program is available from the Teen Art Classes website.

Neville has planned and administered grants received from the Massachusetts Cultural Council (1993-1997), the Institute of Museum Services, Washington, D.C. (1996), the United Methodist Church General Board of Higher Education and Ministry (1991), and the Henry Luce Foundation, NYC (1991). The grants supported art production, teaching or art administration.

Among awards are several first prizes including one from The Fine Arts Museum of Long Island for the painting “Caldera.” Art and Healing, an exhibition catalogue that she designed and wrote, was awarded a prize by the New England Museum Association (1996). The catalogue accompanied the eponymous exhibition that she curated for the National Conference of the Women’s Caucus for Art, Boston (1996). Paintings and etchings by Neville have been included in “Inaugural Exhibitions” for The Bronx Museum of Art, NYC, and the Maritime College, State University of New York, NYC.

Collectors from the United States and abroad have purchased her paintings, etchings, stained glass, cloth banners, designs, and other works.

A natural outcome of producing and teaching art is Neville’s ability to assess the quality, goals, and style of contemporary art. In 1981 she began writing a column of art criticism for the Huntington Township Art League Newsletter (Long Island, NY (1981-1988) and continues writing as Regional Critic for the magazine Art New England (1998 to present). Writing criticism has led to invitations to be a juror for local art exhibitions, choosing entrants and awarding prizes (1981 to present).

Selecting a theme and artists for major art exhibitions, and installing artwork is of interest to Neville who has curated exhibitions for the Women’s Caucus for Art, New York City Chapter; the NOHO Gallery, NYC; the Huntington Township Art League, L.I., NY, (1979-1988), and the Milton Art Museum, Milton, MA (30 exhibitions, 1992-1997).

Closely allied to art teaching and criticism is the administration of museums, galleries and art schools. Neville has been involved in all three areas, serving as the Chairperson, Board of Trustees, Milton Art Museum (2000-2003). For five years she was the Executive Director of the Milton Art Museum overseeing its Art School and Art Exhibition schedule (1992-1997). As president of the NOHO Gallery, NYC, she attempted to bring order out of the chaos of 40 artists running their own cooperative gallery in SOHO (president, 1981-1983; member, 1979-1988). Organizing her own Neville Art School in Yonkers, NY, was a challenge in terms of advertising, curriculum development, purchasing supplies, public relations, and teaching (1973-1977).