Composed of seven panels, the complete work measures forty-nine feet wide and has an impressive presence. This unique, narrative, timeline art installation describes the origins of human creativity. This work is available for sale or exhibit. Please contact Beth Neville for details.

(Drag to scroll the panoramic view below, viewing the work’s entirety.)

Caves to Cosmos is a monumentally sized canvas, height 5 feet by length 49 feet. Topically it explores the history of human creativity, from ancient prehistoric cave pictographs to our newest knowledge of the beginnings of the cosmos.

The painting is part of a trilogy, of which the first two paintings are completed. Eternal Recurrence of the Same constitutes the first segment (5′ x 70′). The last segment (size to be determined) will employ a DNA strand as a motif and will explore the evolution of life on planet Earth, as we know it today.

Caves to Cosmos is made of seven panels each 5′ x 7′ which may be displayed as a complete unit, or singly. The acrylic paint is applied in very small independent strokes often 1/4 inch in size. The surface result is like a tapestry made of many bright, scintillating dots similar to Pointillism.

In every panel the artist has included quotations from other art, artists and art styles. Therefore, the painting reflects the evolution of human knowledge, and the history of art. Beginning with ancient cave writings and drawings, the motifs evolve through historical time to the present. 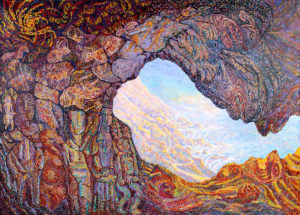 Panel One uses Paleolithic pictographs, Lascaux cave art, Australian aboriginal art, African sculpture, Cycladic idles, Easter Island stone heads, and Assyrian art. The setting is an ancient rock cave, which incorporates imaginary monsters. In the opening of the cave a view of the Big Sur of California coast is visible, an image intended to be a jewel — like a Faberge Egg. Along the coast, the ice plants turn red in fall weather and the color mixes with a transitional scene including Christo’s Umbrellas placed along Route #5 outside of Los Angeles. (The artist was present at the moment a woman spectator was crushed by one of the umbrellas in a violent wind.) 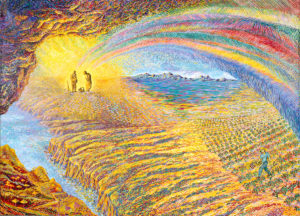 Panel Two depicts the Garden of Eden, as a rose ranch in ’s friends, co–owner of the rose ranch died of AIDS) In the upper left, two farmers (the artist’s parents) are painted as a quotation from Millet’s praying peasants. Placed at the “pot of gold” at the end of the rainbow, the basket contains apples, not potatoes. In the lower right a rose ranch worker harvests long stemmed roses in a basket, (a symbol of fertility) but in his left hand he carries a long scissors, (symbol of the reaper of death.) A multicolored rainbow (a symbol that appears frequently in Neville’s works) arcs overhead, springing from a violent cloud storm in the upper left.

Panel #3, Growth of the World’s Religions 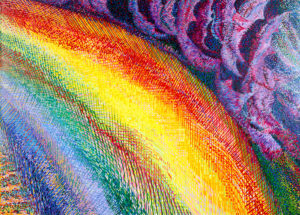 In Panel Three, God’s rainbow promise is the central image in this panel, the rainbow painted in a variety of “styles.” In the lower left, stained glass windows are reflected, in the middle gorgeous colors overlap in crisscross strokes. The quality of women’s weaving is evoked. At the apex of the rainbow the artist attempted put the most discordant colors together possible. Violent yellow–greens against vivid orange. Here the colors are intended to vibrate against each other making it difficult for the viewer to focus on their edges. In the upper right, the images change to “birds of flight”, or energy waves. The strokes reflect the patterns of Tlingit Indian work, or North American Indian feather work. 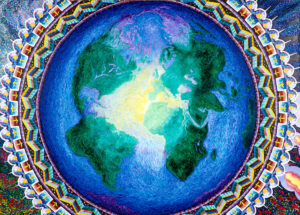 Earth as an object in the cosmos is the central image of the entire painting and of this panel. The sphere is surrounded by Byzantine mosaic tesserae setting it off as a jewel. The planet Earth is shown as depicted on maps used by airline pilots with the South Pole shown low. The earth’s blue ocean waters and fertile green land are vulnerable to plundering and human destruction. 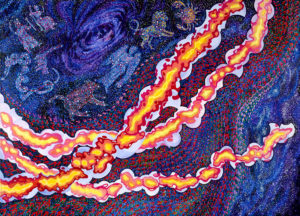 The diagram of the “gamma rays” of the Milky Way dominates the central portion of the panel, forming an undulating line, which weaves against the red arrows of the “flow of the River of the Universe” (another image generated by scientific exploration of the cosmos). In the upper left the ancient way of mapping the stars, worked out by Middle East astronomers includes Draco, Pleiades, Bear, Lion, Crab and other constellations. The Flow of the River and the Gamma Rays intertwine in a sexual dance of life. 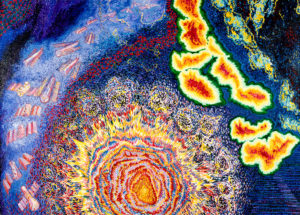 The Hubble Telescope, COBE and Gamma Ray observatories provide new visual information about space depicted in Panel Six. On the extreme left the deaths of astronauts in the pursuit of knowledge is recorded. The various instruments of exploration are tinged with red (blood) and the blood spatters mingle with the red arrows of the previous panels. The central image is Super Nova 1987A, and it is painted in an expressionist manner with violent strokes, jagged lines and conflicting colors. At the upper right another super nova, Cassiopeia, discovered 600 years ago is painted across two panels. The painting style changes to one of “portraiture” as the depiction is taken quite literally from the photo of the event. However, at the edges the gas clouds took on a painterly life of their own and became more concrete, something like “geodes.” As the yellows blobs with red–orange centers became discrete, the artist surrounded them with pale greens to deep green encircling lines, thus forcing a hard edge to the soft gas shapes.

Panel #7, Origins of the Cosmos 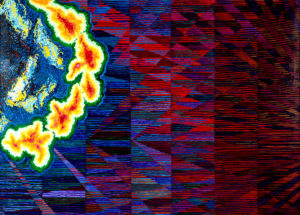 In the upper left of Panel Seven the Cassiopeia image is completed. In the center and to the right Background radiation from the Big Bang is introduced as a symbol. Because there are no know visual images of this ancient matter, the artist chose to depict it as

The horizon line is below the 1/2 mark to indicate the slight asymmetry that is thought to have led to change and cosmic evolution. The resulting pattern of glowing reds, blues, browns and blacks is one of the most elegant painterly sections of the entire work.