In 1964 my husband of one year, Robert said, “Why don’t you stop teaching art to middle school kids and be an Artist? It was a stunning question. Since earliest childhood I loved painting and drawing, but to be an “artist” was something too special, too daunting for me to achieve. I had been brought up knowing that I had to “go to work to make money.” Therefore it was obvious that I should teach art. But in the classroom I was always using the art materials to do my own projects and the students would get out of hand. Bob and I talked over the finances of living on one income, and we decided I should give “being an artist” a try. Five decades later it is my chosen profession and I work at it all the time.

After completing my last year of full-time teaching in June, I began the summer working a full 8-hour day producing art. I set up a daily schedule and began a diary of my progress. But where to begin? I had not gone to an art or design school so had no answer to the question. Smith College gave me an excellent liberal arts background but it did not prepare me to be an “artist.” I had a one class about oil and watercolor painting so I began there. And what to paint? Well, why not start with what I loved, my husband and family, so I began with portraits. By the end of the summer, I was painting large-scale portraits on Masonite. It was cheap and easy to obtain.

Experimenting, try to find a personal style, I painted “Robert with Flowers,” (18) “Old Woman and the Red Chair,” (19) “Sister Mary Corita,” (23) “Girl on the Couch,” (22) and “Girl in the Batwing Chair,” (20). Believing that I had to follow the tenets of Abstract Expressionism, I did not pre-design the imagery and drew the design directly on the Masonite. This misconception led to major errors in composition. “Leonora Egan Playing the Piano,” (04) was redrawn several times and the changes now show through as pentimenti. The same is true of “Geraldine Hodge and Her Daughter,” (05) when compositional mistakes were corrected on the canvas. One of my first paintings, “Dr. Elah Bliss,” (07) was accepted for a very prestigious juried exhibition on the New Haven Green. It gave me a real boost in my confidence. The bold use of large-scale, bright colors, and a flair for unusual compositions became a trade mark of my early style of painting. I didn’t know much about how to paint portraits so I kept the faces and the surfaces flat and one-dimensional. An excellent example of this technique is “Beth in the Renoir Hat,” (11.) But as I kept painting, the peoples’ faces became more realistic and three-dimensional as in “Leonora Egan Playing the Piano,” (04.) This became a stylistic problem. Was I painting “flat,” or “three-dimensionally?” In “The Family Tree,” it is obvious as Bob’s face is quite realistic, my face less so, and the space setting is flat. The same tension is seen in “Bob and Beth in the Batwing Chair,” (15.) However, I love all these paintings with their colorful portrayal of our early marriage. They were highly original and didn’t reflect any contemporary style. They flew directly into the head-winds of the popular Minimalist art theories of the day!

Career wise, I solved the problem by beginning to work in three very different media; wood sculpture, photomontage and shaped canvases, none of which raised the 2-d, versus 3-d dilemmas. My subjects turned to civil conflicts such as civil rights, the Vietnam War, and nuclear annihilation. (See web-site sections: Photomontages and Sculpture.)

All the same virtues and stylistic problems that are apparent in the oils can be seen in my watercolors of the same period, (24, 25 and 26.) By the time I began drawing and painting my infant children, 1966-69, I was skilled enough to be comfortable in realistic three-dimensional painting (27, 28, 29, and 30.)

Using black pen and ink on white paper, I did a series of portraits for Robert’s first book, God the Creator. These drawings did not involve issues of space, merely “likenesses.” I am proud of these portraits, a part of my early career and the beginning of 50 years of collaboration with Robert on book covers and illustrations of his writings in philosophy and theology.

Recently I returned to large-scale portraiture to record my two adult daughters. “Leonora Reading by the Fire,” (01) is my portrait masterpiece. I carefully planned it with a cartoon so that all the composition problems would be solved in advance. It incorporates many symbols of her life, is a very accurate portrait, and a bold and colorful composition. The larger portrait of “Naomi, Architect,” (02) also uses a dense symbol system. She was living in California, so I used the “Big Sur” as the background with California Poppies as a colorful motif. The Gothic arch obviously refers to her chosen career as does the twisting pedestal. She is wearing a stunning long dress, but has bare feet, a sign of a carefree lifestyle. The lily with its long white flowers is a symbol of her sense of style. I struggled again and again with the face, never happy with it, but I still like the painting. I know so much more about painting portraits now, I could easily handle the issues of facial features

My very latest oil paintings are small simple portraits of grandchildren and neighbors. Every time I paint one I get better at it, and would love to do more, (40 -48.) 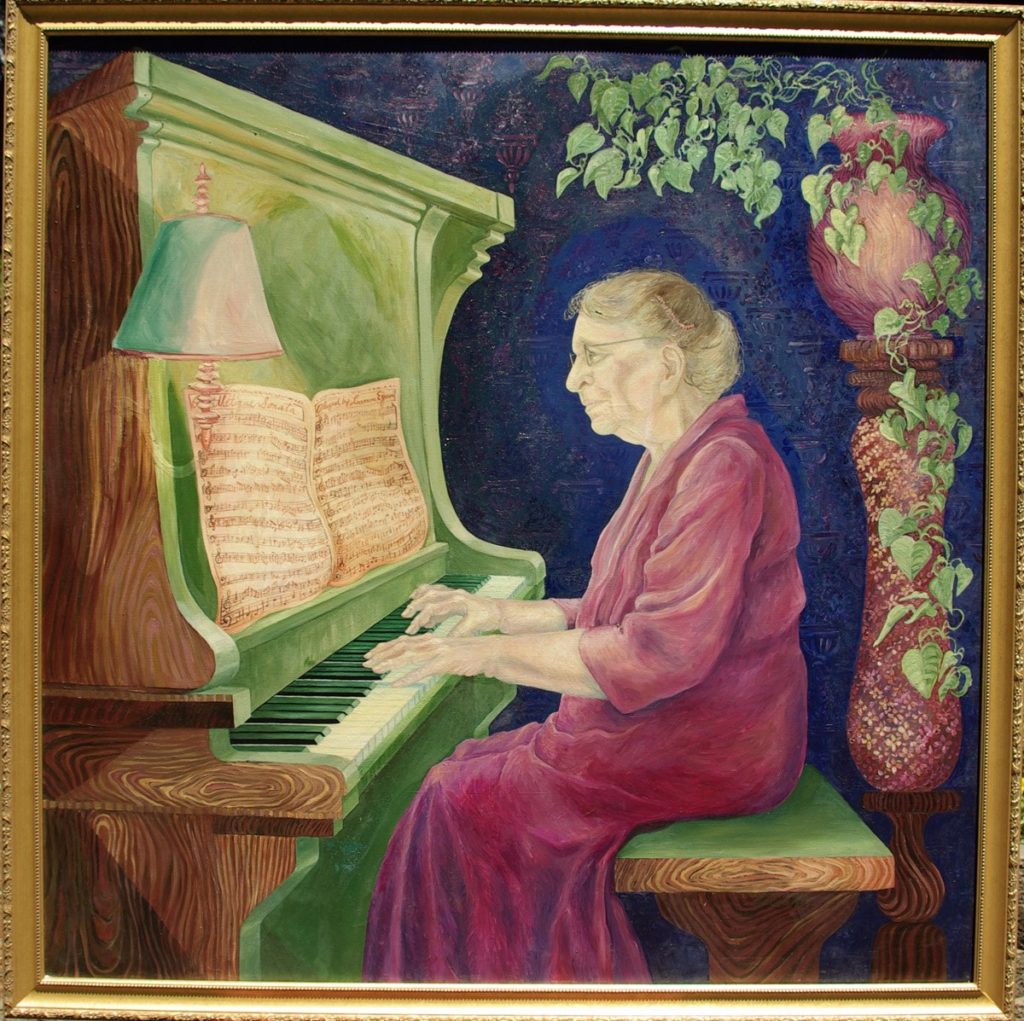 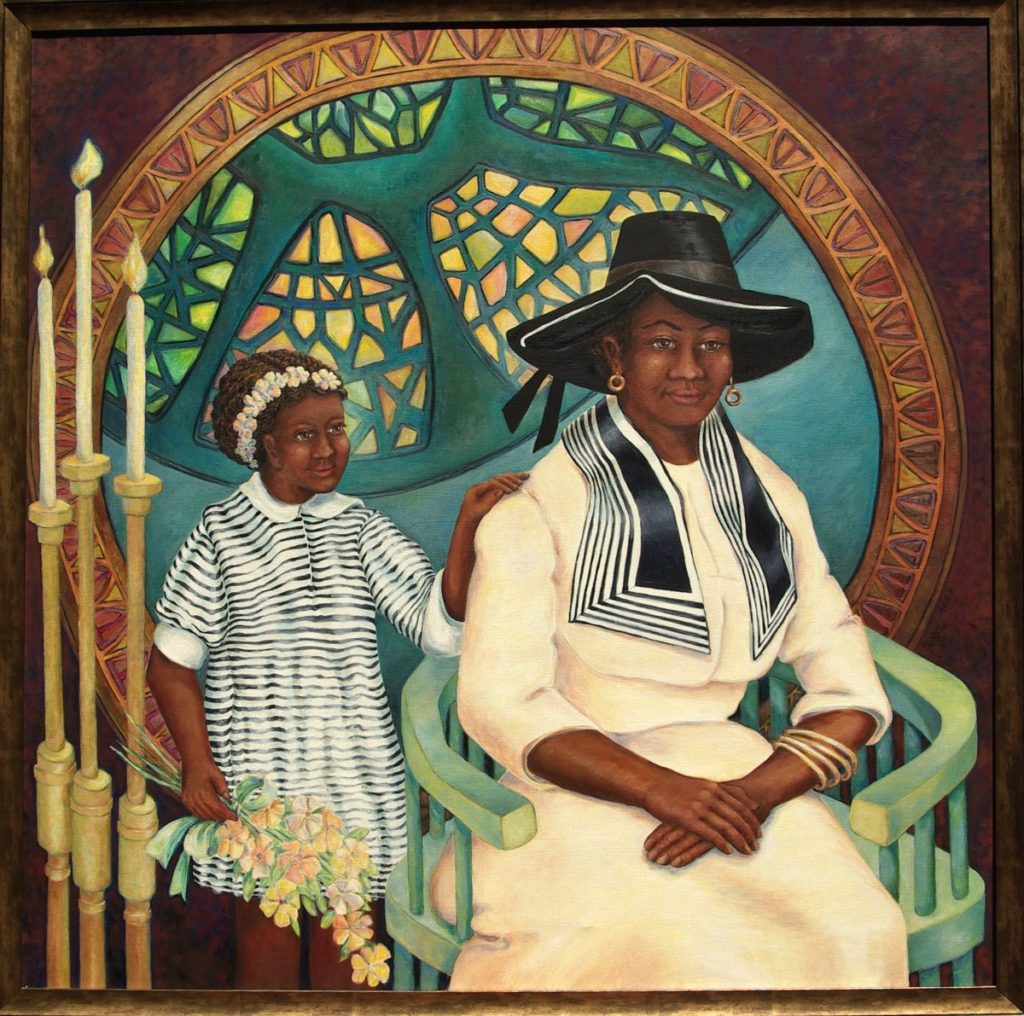 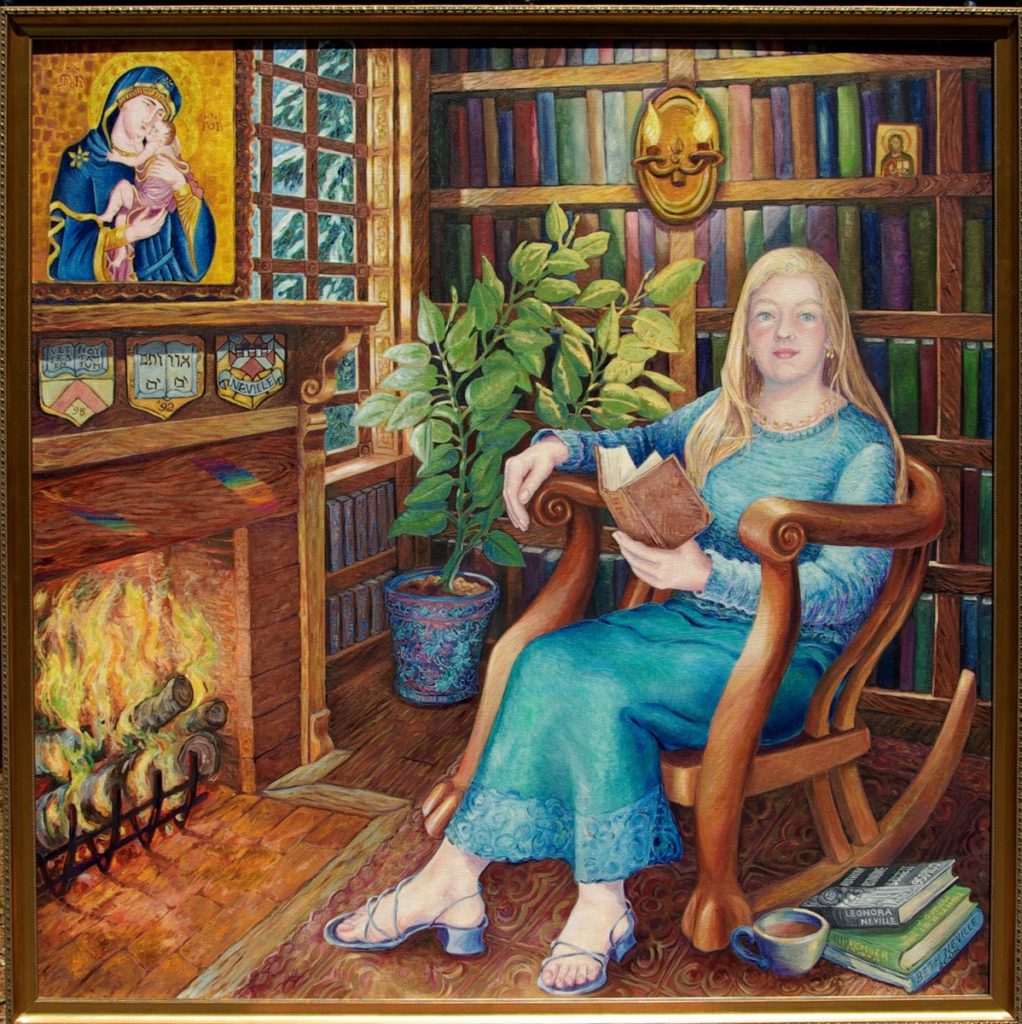 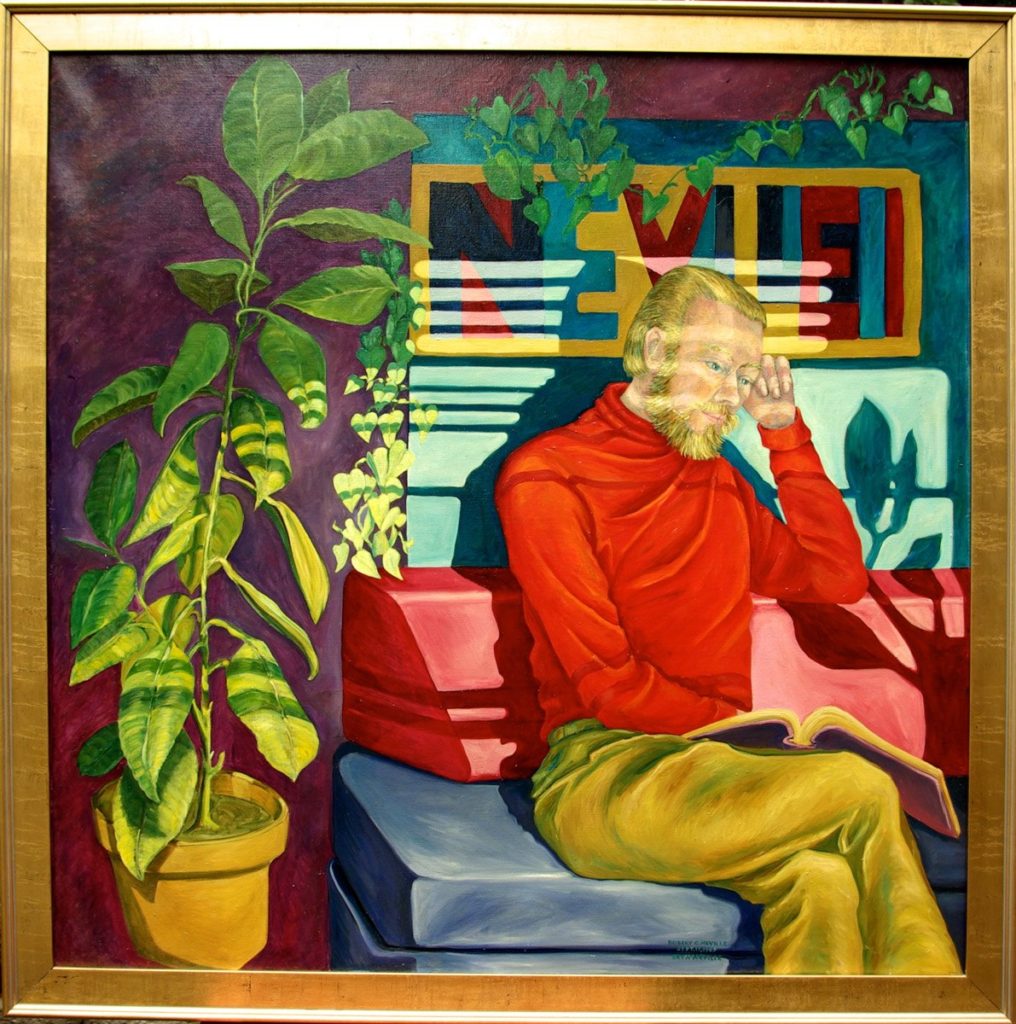 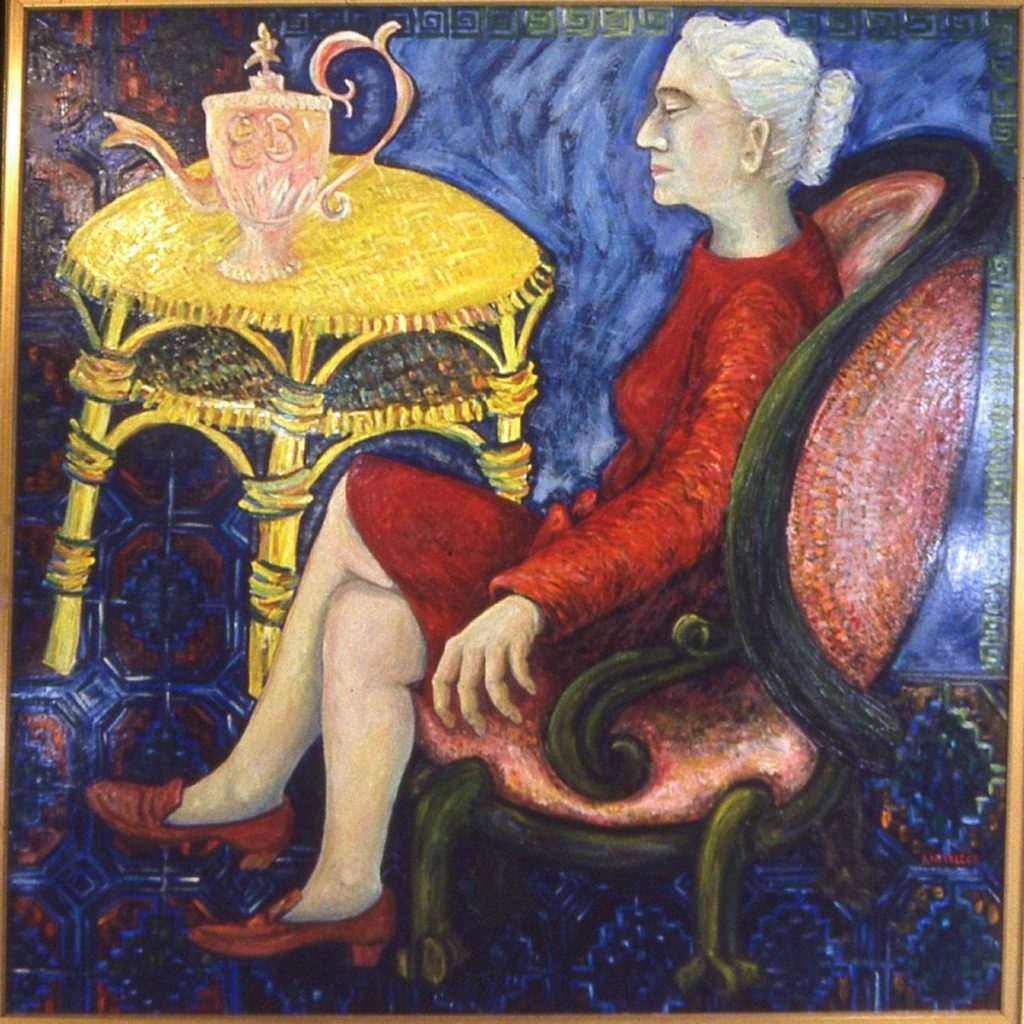 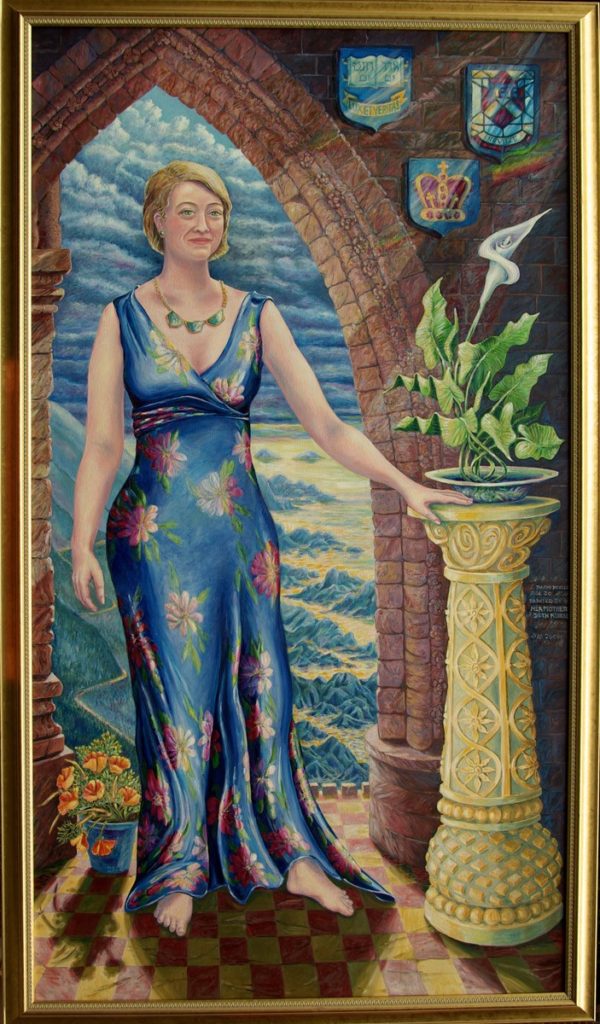 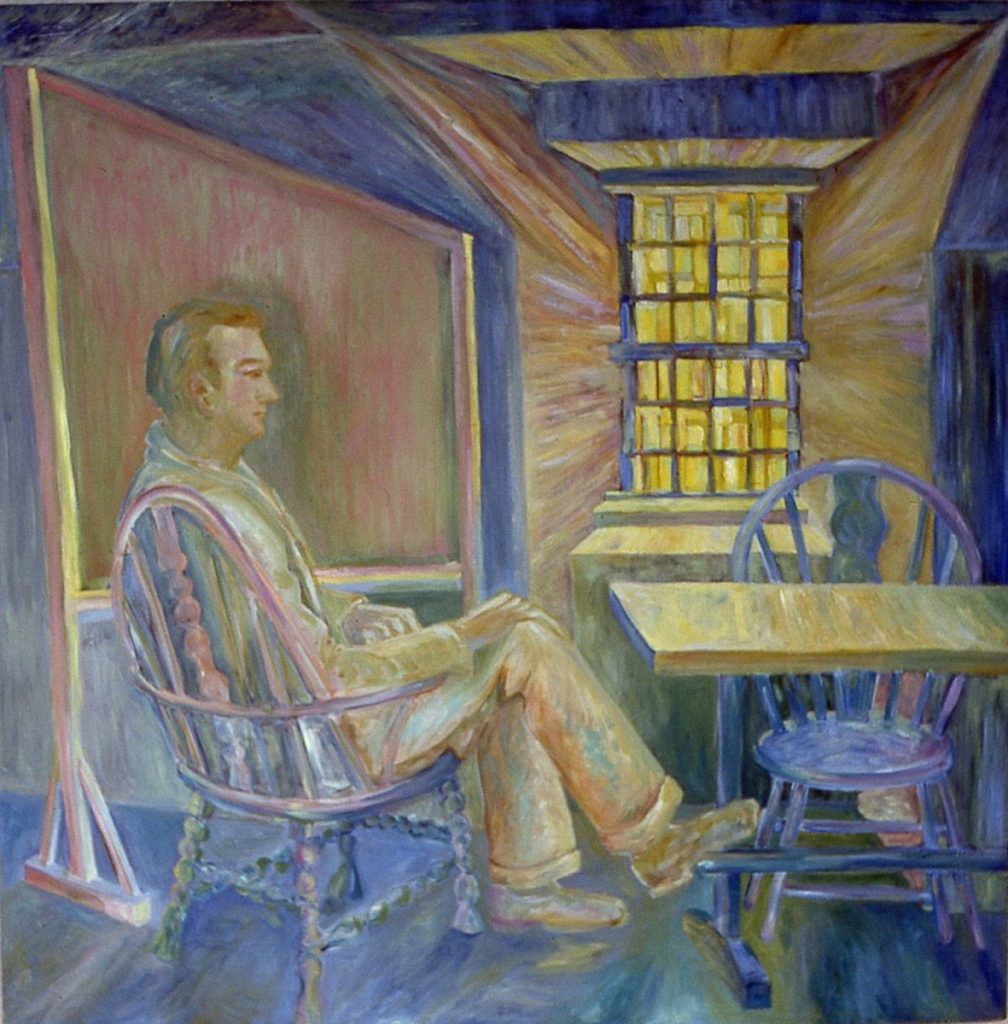 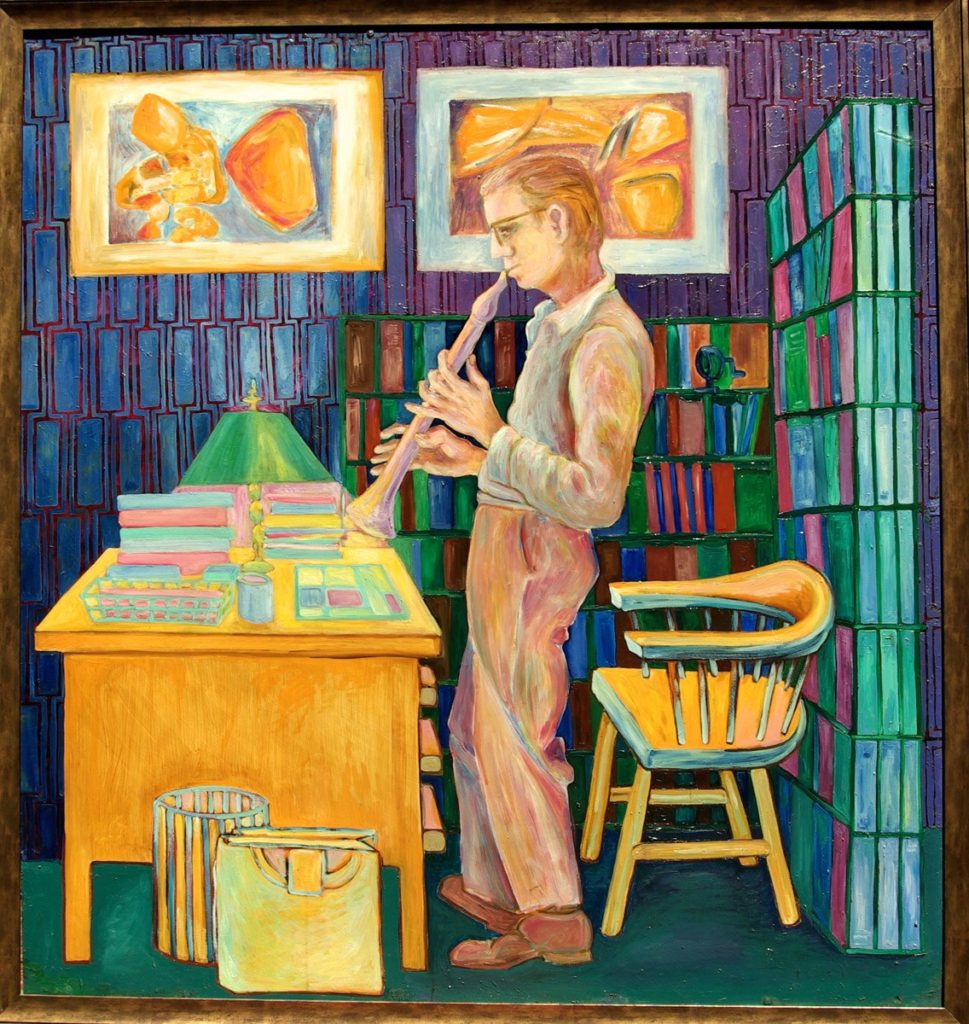 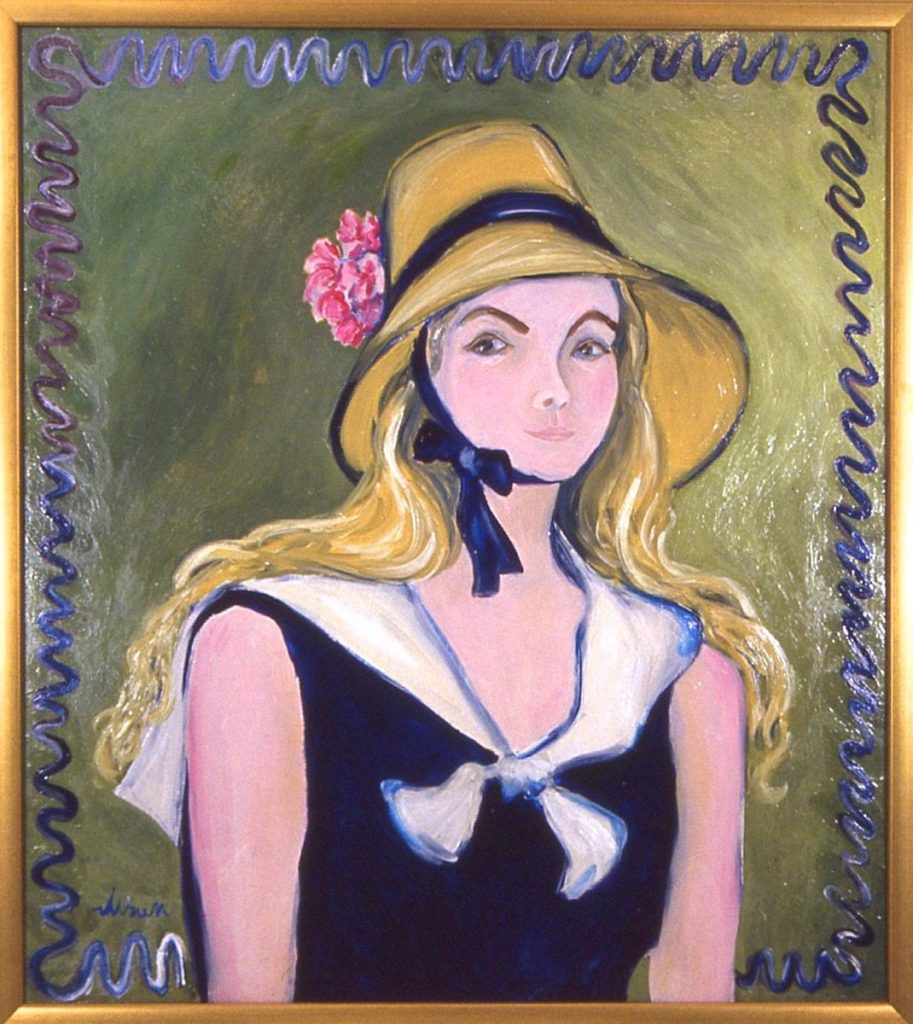 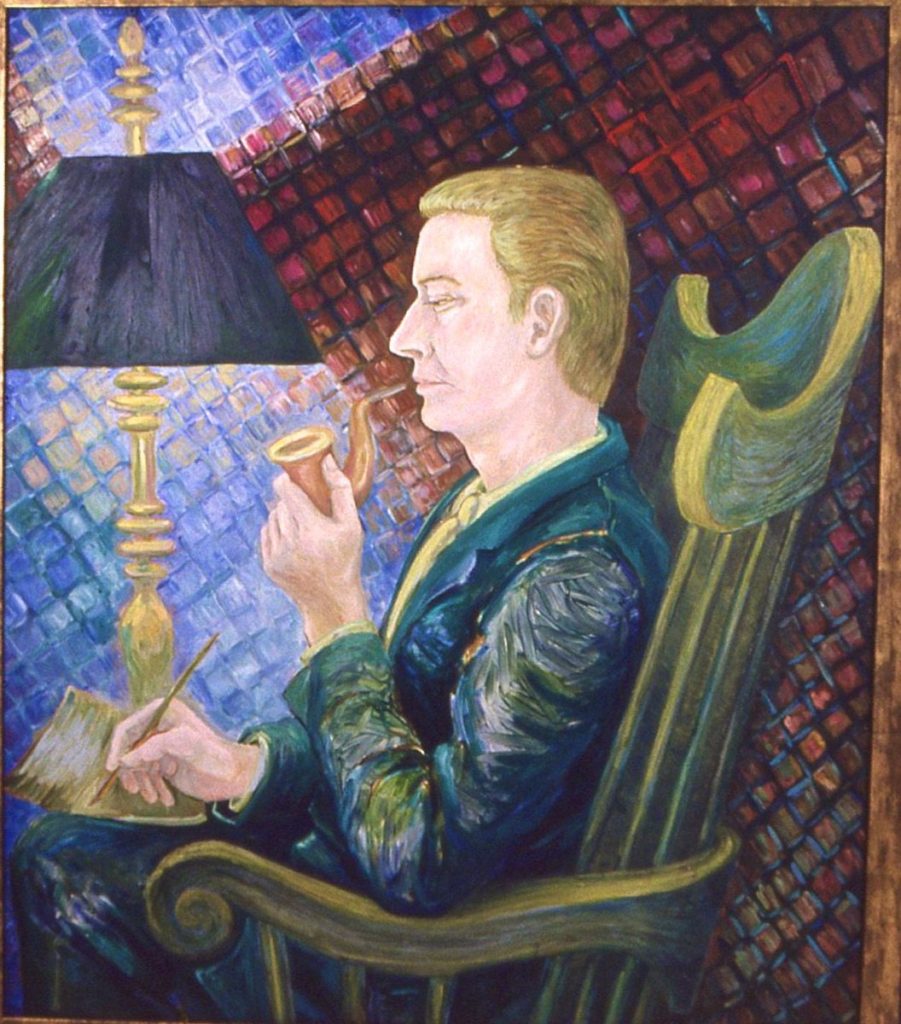 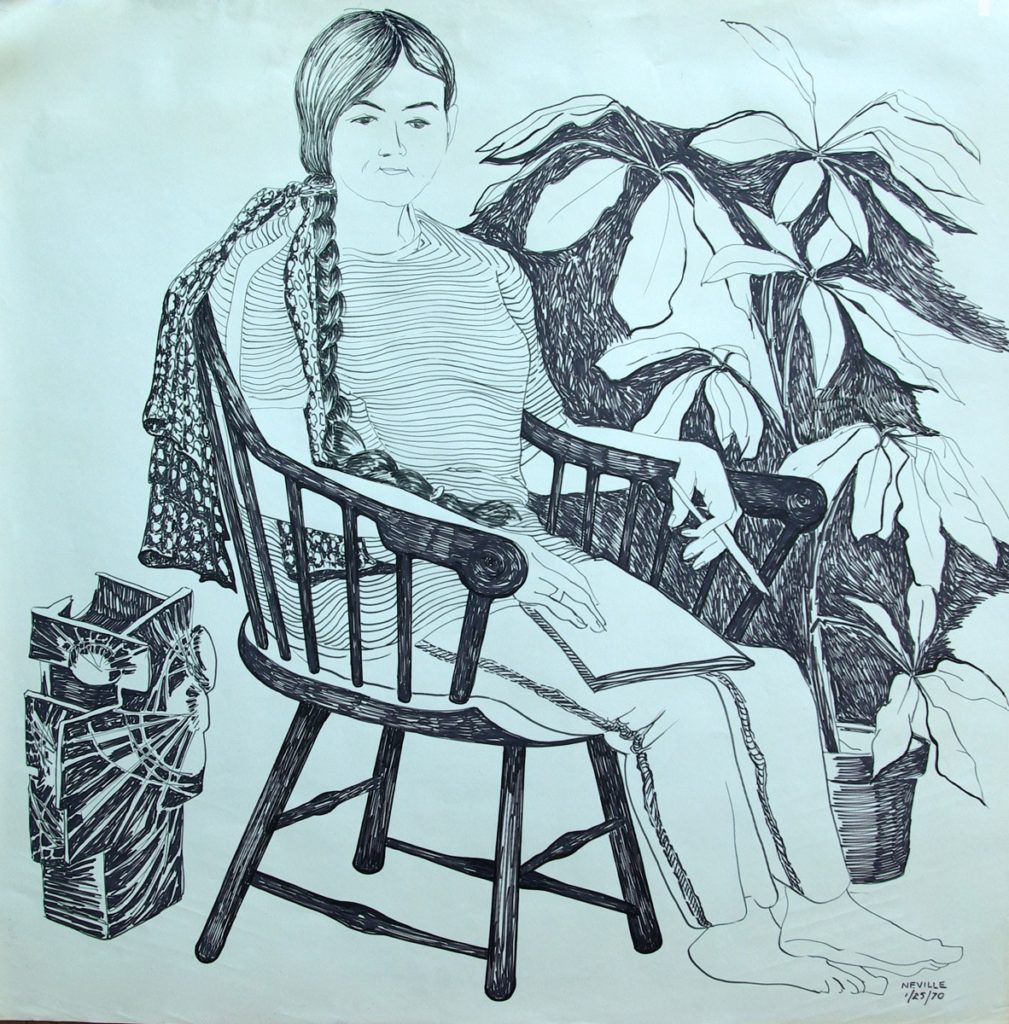 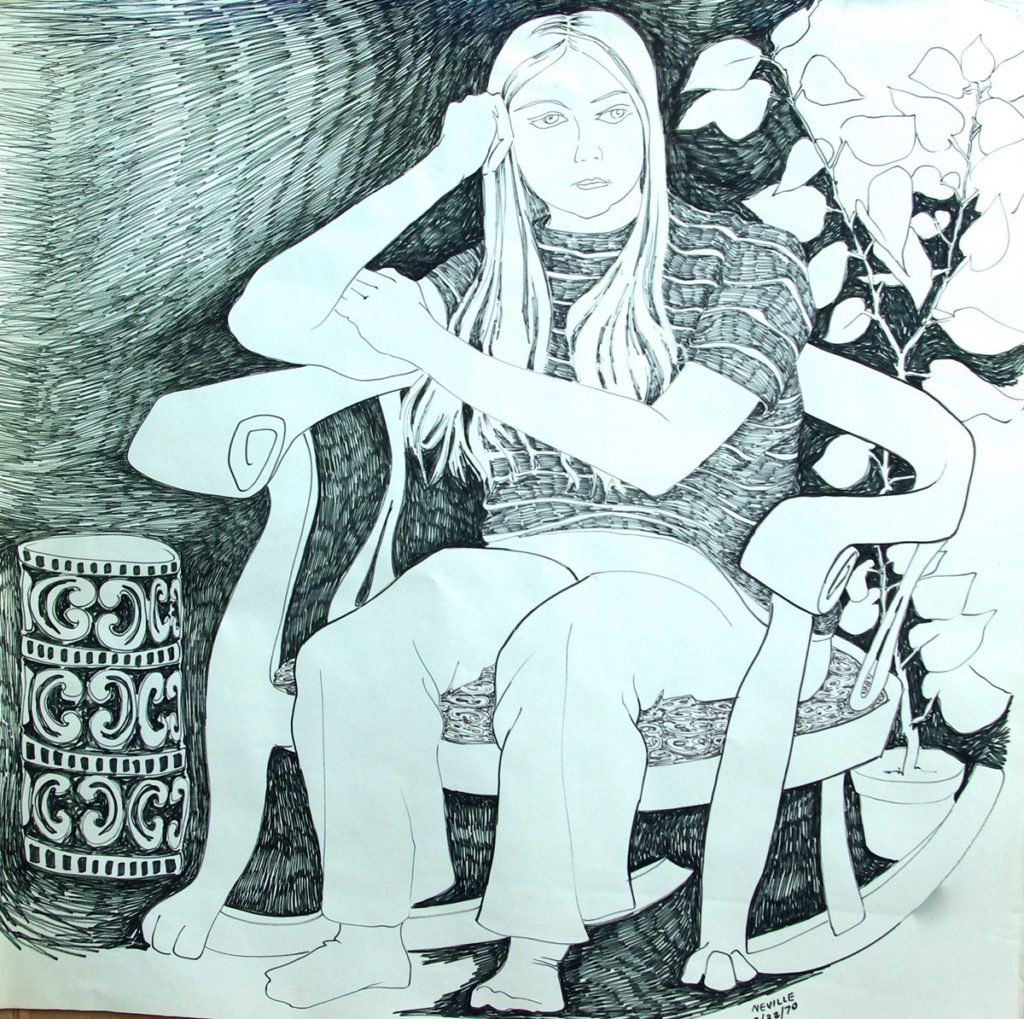 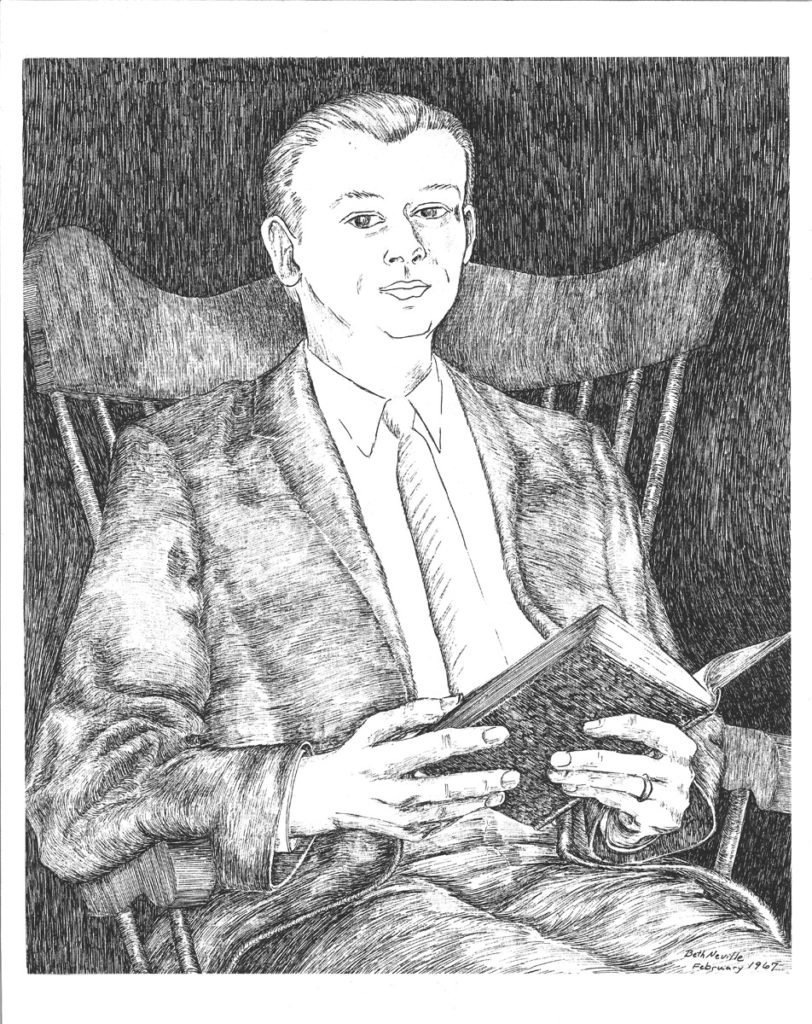 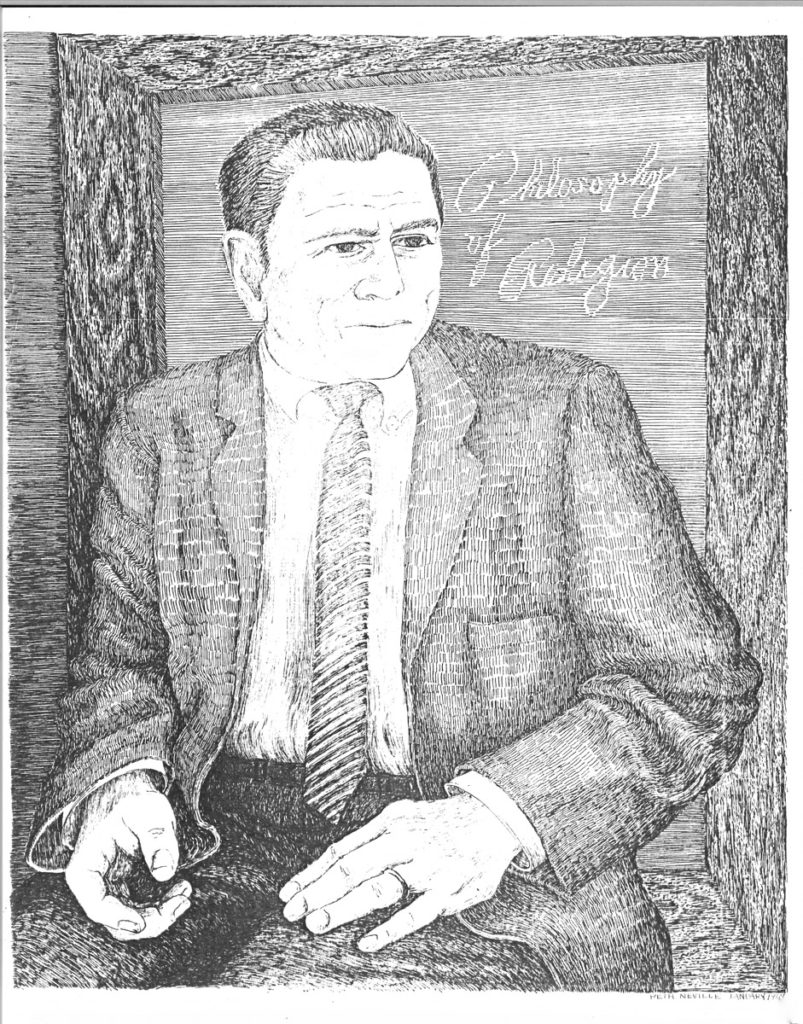 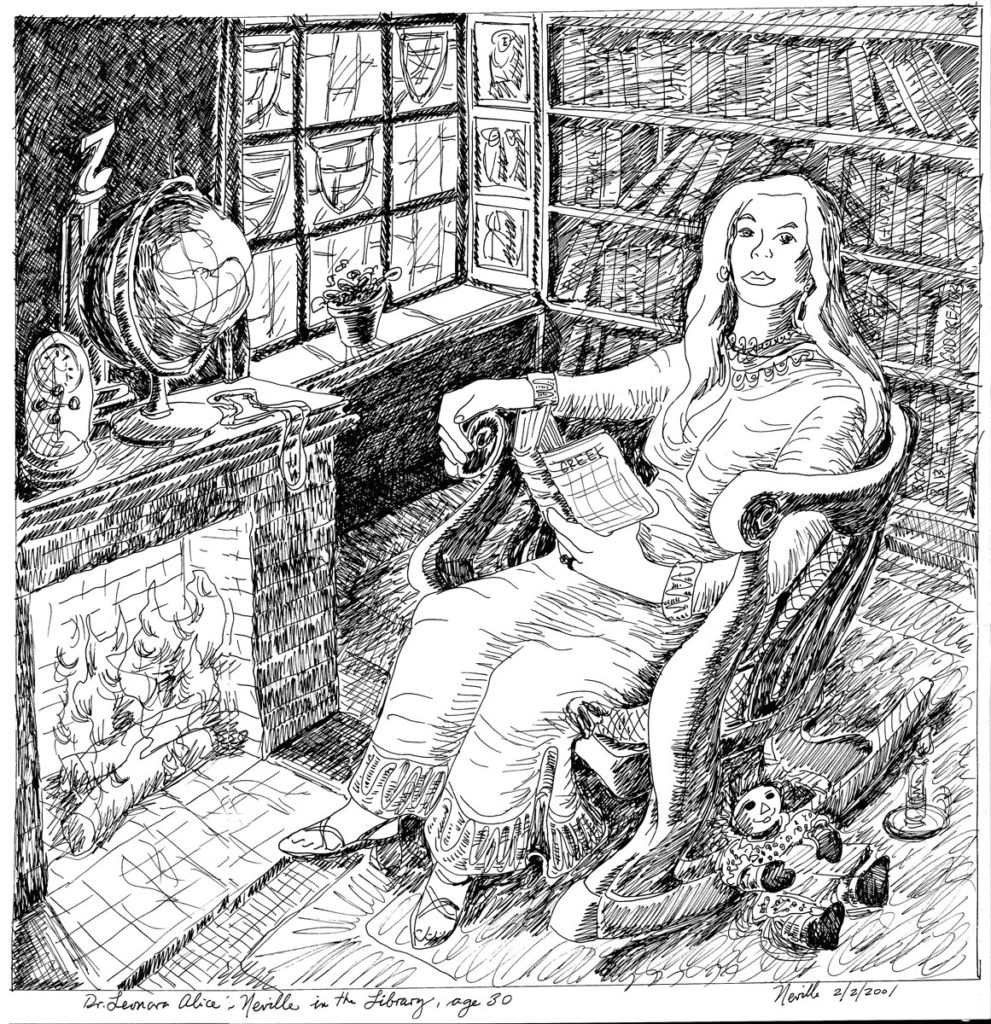 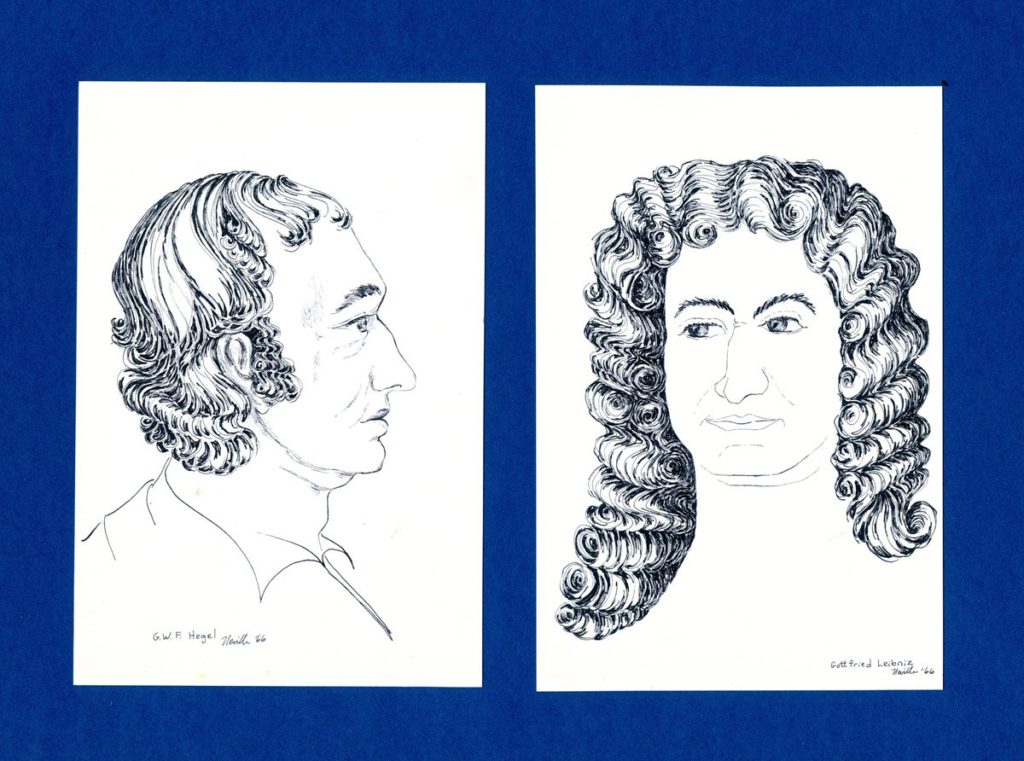 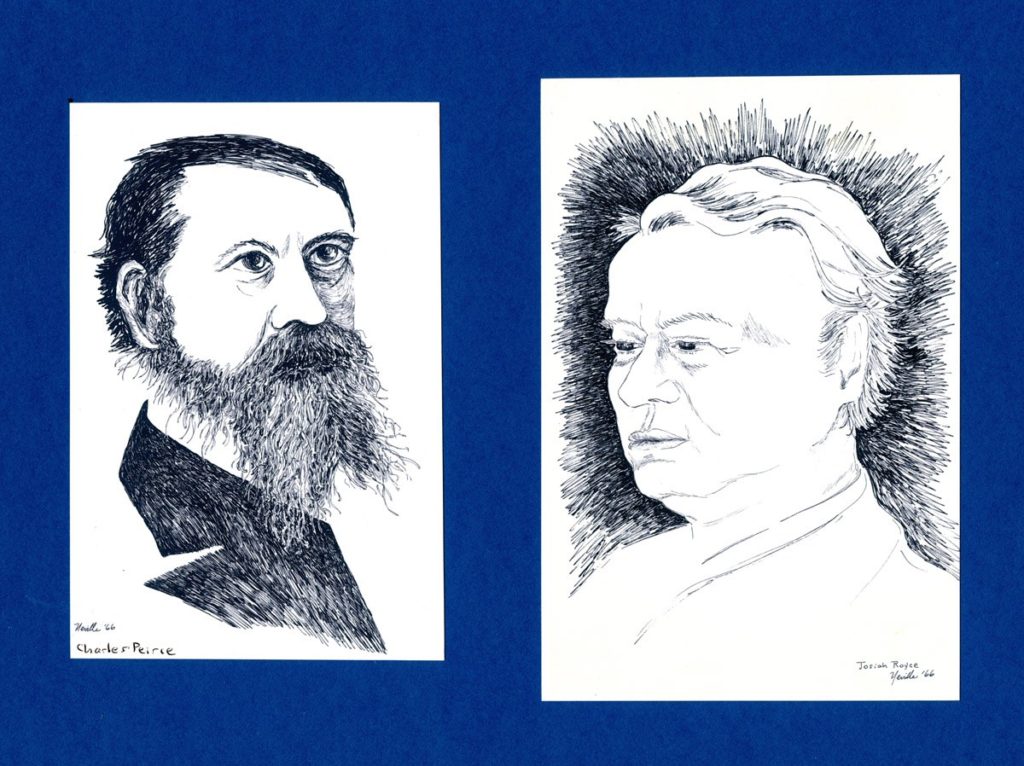 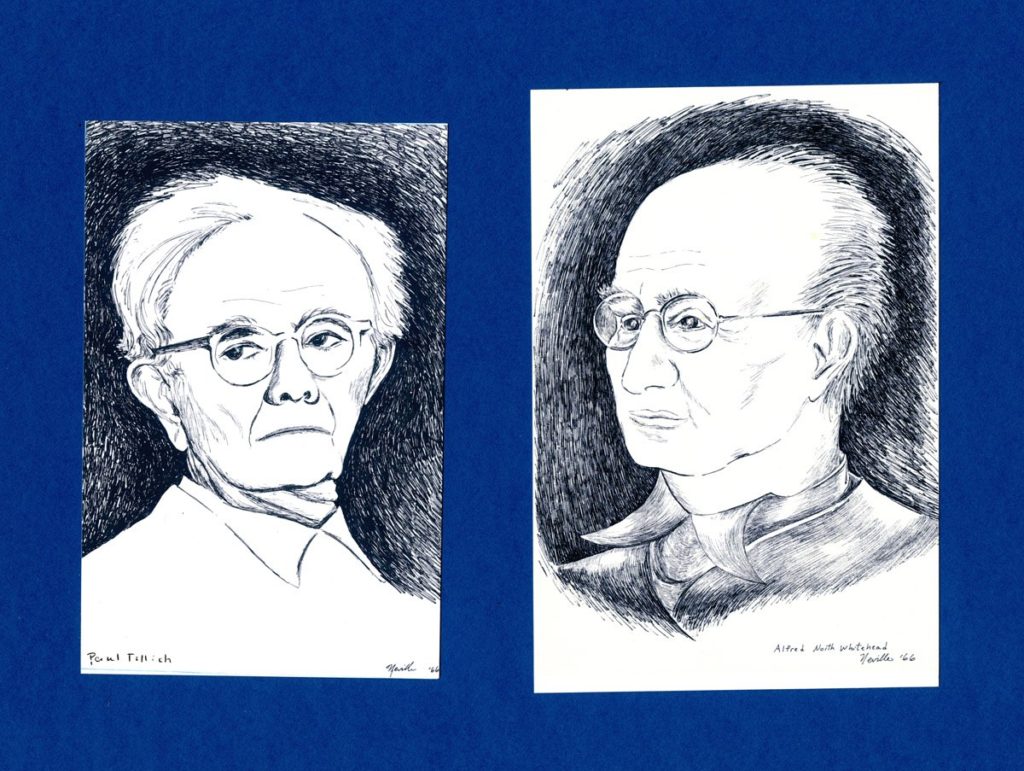 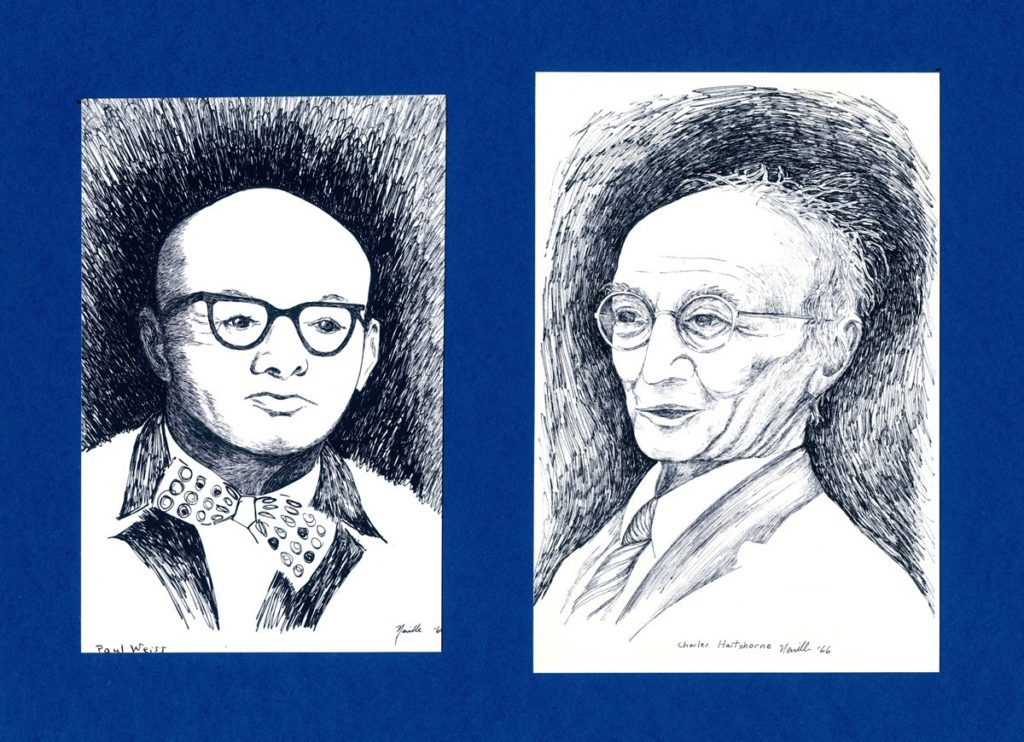 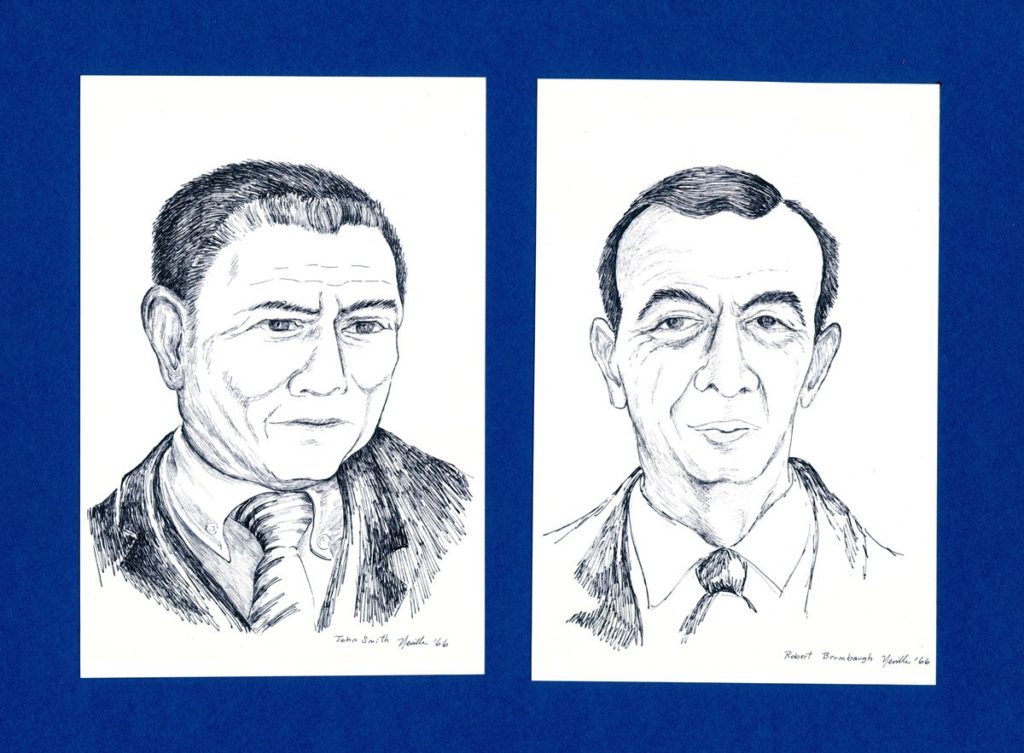 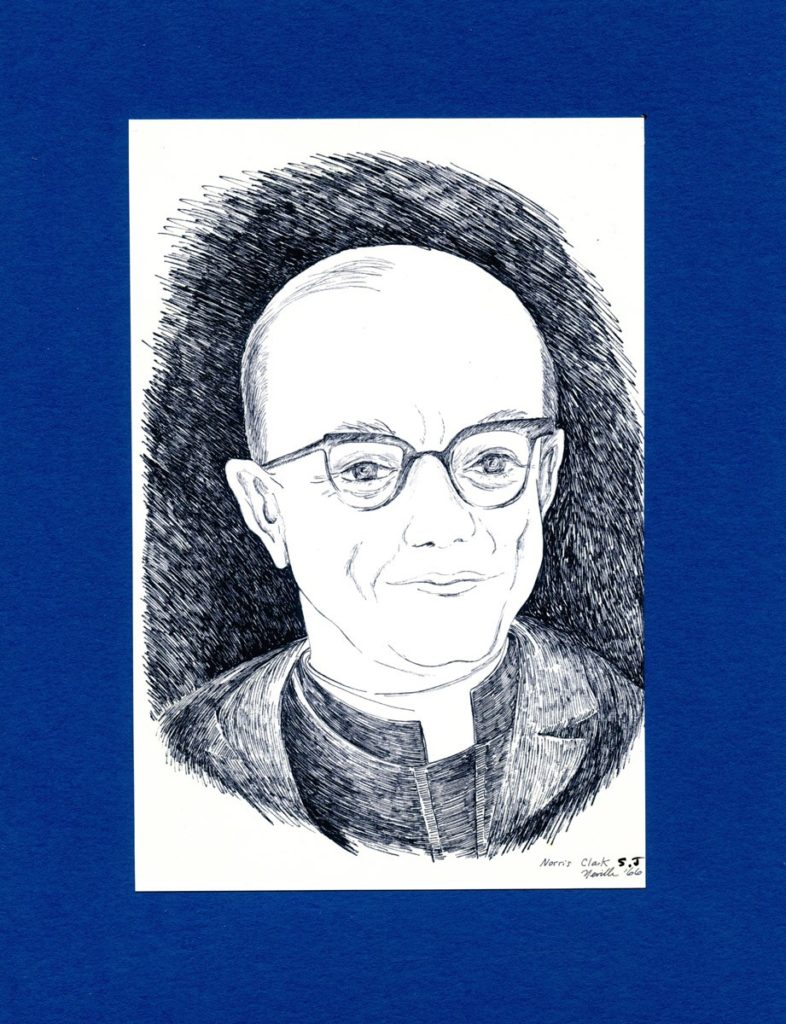 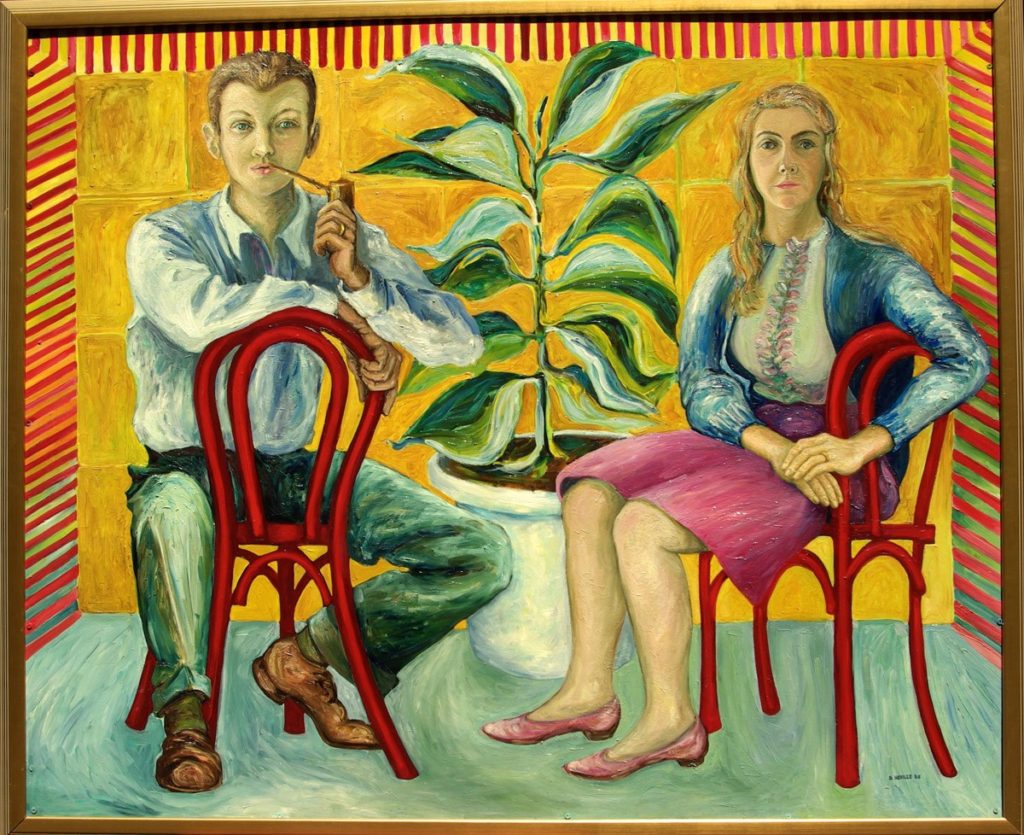 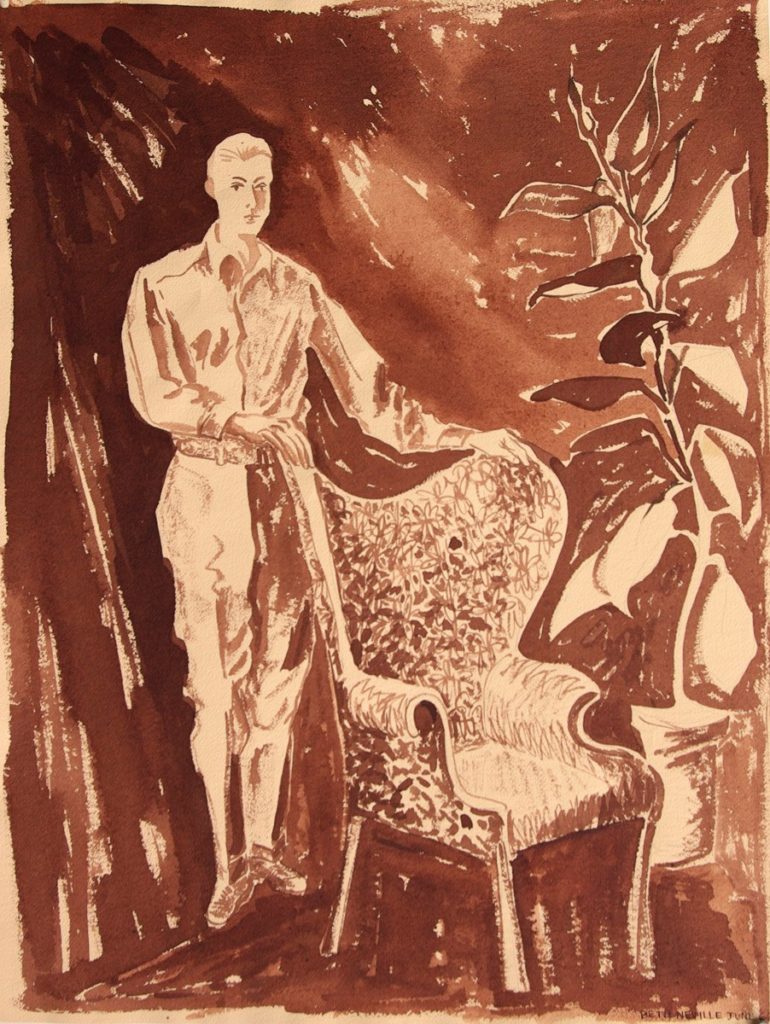 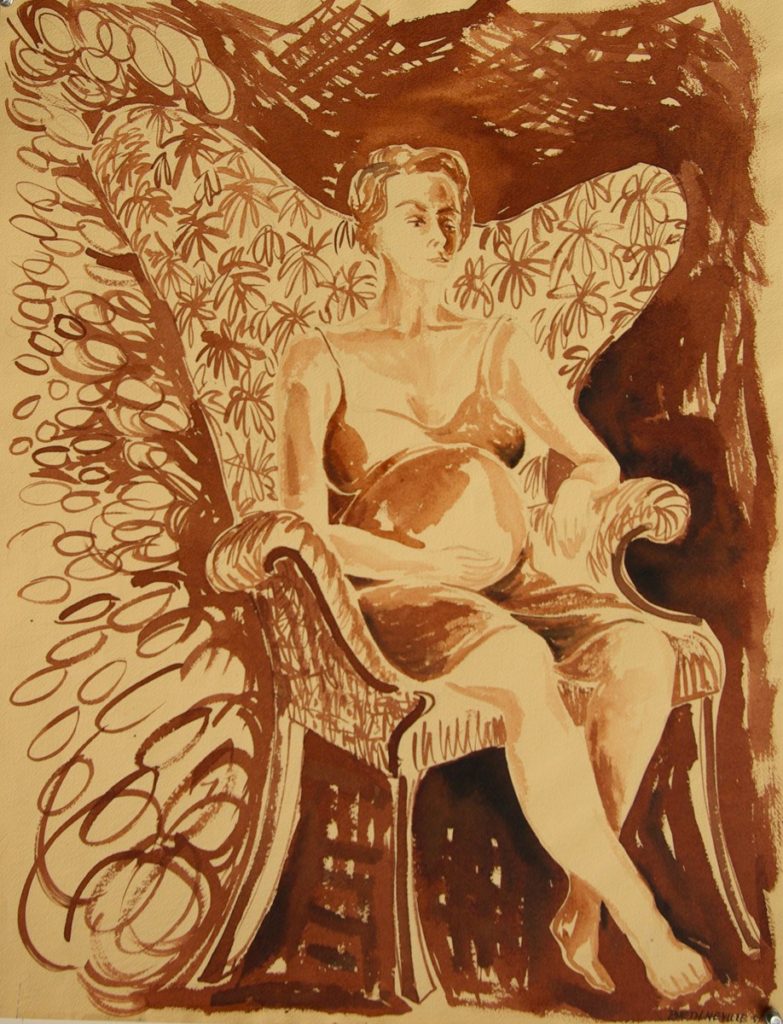 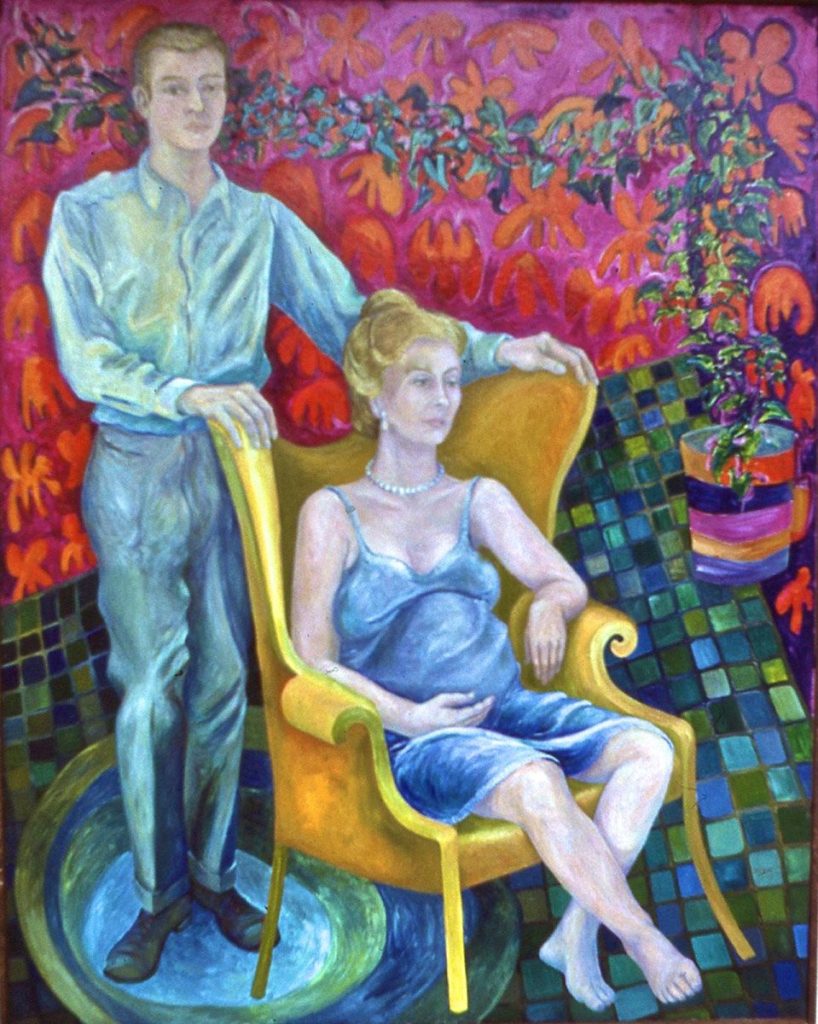 25 "Bob, Beth in Batwing Chair,"oil, h 6' x w 4'
Next »
Many of the works on this site are available for exhibition or sale. Please contact the artist for additional information.