I was born at the end of the Great Depression and my parents, Harriet and Philip Egan struggled to make ends meet on their farm raising pigs, sheep, goats, geese, chicken, turkeys, vegetables, and mainly, apples. (See Banner, “Egan Apples” # 01.) We had 150 acres of Hudson Valley farm land, a big historic house filled with books and art, tractors and hay wagons, but No Money!

In rural America from the 1930-80’s the 4-H organization was an important educational resource teaching boys and girls useful skills to improve farm life and enhance their cultural opportunities. It was the most important formative activity of my teenage years, and from 4-H I learned everything from public speaking and teaching to sewing and swimming. My Fabric Art endeavors began with 4-H and the “Dress Review” competitions where only the most meticulously constructed garments could win a blue ribbon. The garment also had to be creatively designed and when we modeled our dresses at a Columbia County Review the body-fit had to be perfect.

Clothes were very expensive to buy because they were made in America and the factory workers who made them were paid a good wage. Fabric, also made in the US, was relatively cheap and so it made economic sense to make our own clothes. By my high school years I made almost all my own clothes except undergarments. Coats, suits, blouses, nightgowns, hats were all made on our old foot-pedal Singer sewing machine, converted to electricity.

By 1954 my sewing skills were good enough to earn me entrance into the annual New York State Fair, Syracuse NY, Dress Review. In the photograph of the newspaper article (#02) I am on the right wearing a dress and matching purse I designed. I was a “runner-up” to go to the National 4-H fair and was bitterly disappointed to not be chosen for first place. Later, however, I was “chosen” by Robert Cummings Neville as his marriage partner. In June 12, 1963, (photo # 03,) married all of three days, I am wearing the same dress. As you can see, I got many years of use from my precious hand-stitched dresses. I also made the dress in the left-side photo, taken at my engagement party. And I designed and stitched my wedding dress seen in the black and white photo (#04,) with new husband Robert. I may not have won the 4-H top prize but I did win the Yale PhD student and life-long companion. Naturally, when our 50th wedding anniversary came up, June 8, 2013, I made my blue dress with a shawl of three-dimensional ribbon fabric from India, (#05.)

When Bob and I were married money was scarce and clothes expensive so I continued to sew garments for him, as well as myself. For his academic work he needed a blue satin Yale academic gown. No problem! I bought blue fabric, black velvet and somehow or other figured out how to make the gown’s Medieval gathered sleeves, which involved putting a piece of cord in each gather. He used it for years until sadly it faded to maroon, Harvard’s color. I made him a “smoking” jacket with maroon satin borders, a bell-bottomed trouser suit of leather with a toggle jacket (#06,) a Scottish plaid jacket (with every plaid matching perfectly) and a stripped suit in the ‘60’s hippie style! I made an outrageous “jump suit” in a red, white and blue fabric that zippered up the front. Bob loyally and bravely wore it once or twice, but even I had to admit it was way over the top, even for the sixties. He wore it to a stuffy Italian restaurant in the Bronx at the height of the anti-Vietnam war movement and the old wait staff was so offended they made him wear a green jacket over it.

As years passed cheap imported clothes, made for pennies-an-hour wages in Japan and Korea, became available and it was no longer financially necessary to make clothes. I stopped making garments for Bob and only made stylish or celebratory occasion dresses for myself. Examples #41 and #42 are my “mother of the bride,” dresses I designed for the 2002 weddings of my two daughters, Leonora and Naomi. Both feature expensive imported Indian fabric. I do regret my choice of light colored leather shoes to go with the brown suede fabric long skirt (#42.)

So what to do with box after box of cloth scraps generated by all these homemade clothes? There was an easy answer: make Fabric Art out of them. Thus I began to make what I called, “Banners.” (For a discussion and images of this art, see the web-site listing “Banners.”) I searched through my boxes of cloth until I found textiles I liked together, spread them out on a table, moving the cut-out shapes around until I approved the design. Often I would make new cuts and shapes. Then I pinned the pieces together and began stitching them with thread and needle, turning under the raw edges so they would not show. I had several commissions to make custom designs, the largest being the banner for “Katonah Gallery Member Artists” #23.

In 1990 I was selected to have a solo exhibition at the newly formed Milton Art Museum, a major opportunity to exhibit a wide range of my artwork. I developed a Fabric Art room that included human-sized plywood cut outs for my dresses, the Banners, extra sections of cloth, and three of my life-sized portraits. ( See # 27-#49.) The cloth in the dresses is often the same used in the banners, and the banners appear in the portraits. So there is a riff back and forth between the media. I have recently restored the cut-out figures (#40) and have kept all but one of the dresses and am the process of redressing them for my Great Wall series. A separate web-site category will recreate some of this art.

Importantly, the shapes and patterns in the banners reinforced my creative designs in other media. This is especially clear in the Shaped Canvases, Stained glass, Wood Sculptures, and Photomontage, where the design elements depend on bold, and irregular shapes. And occasionally, even the cloth construction principles are helpful. For example the stretching of cloth fabric over the round curves in the large-scale Shaped Canvases is similar to inserting a sleeve into the body of a blouse. 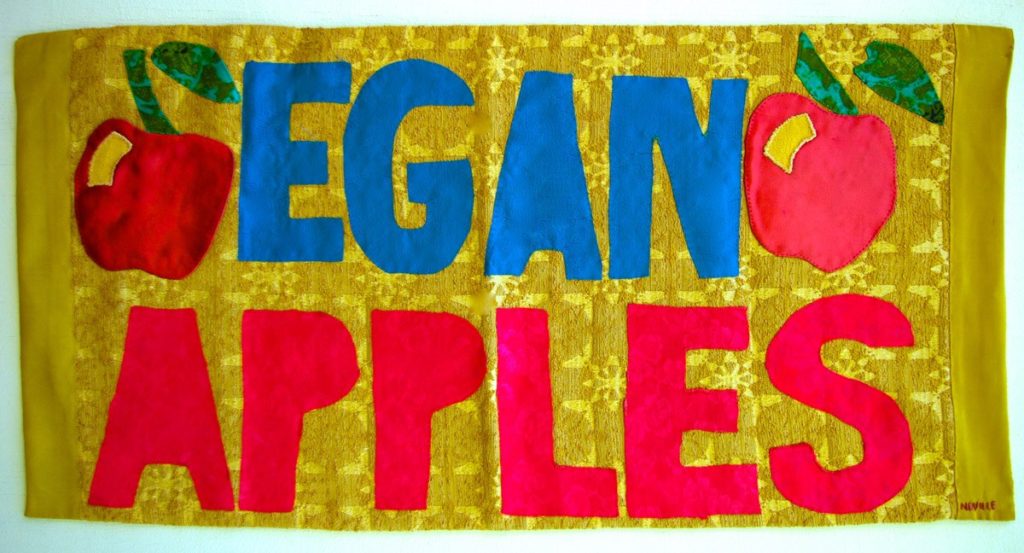 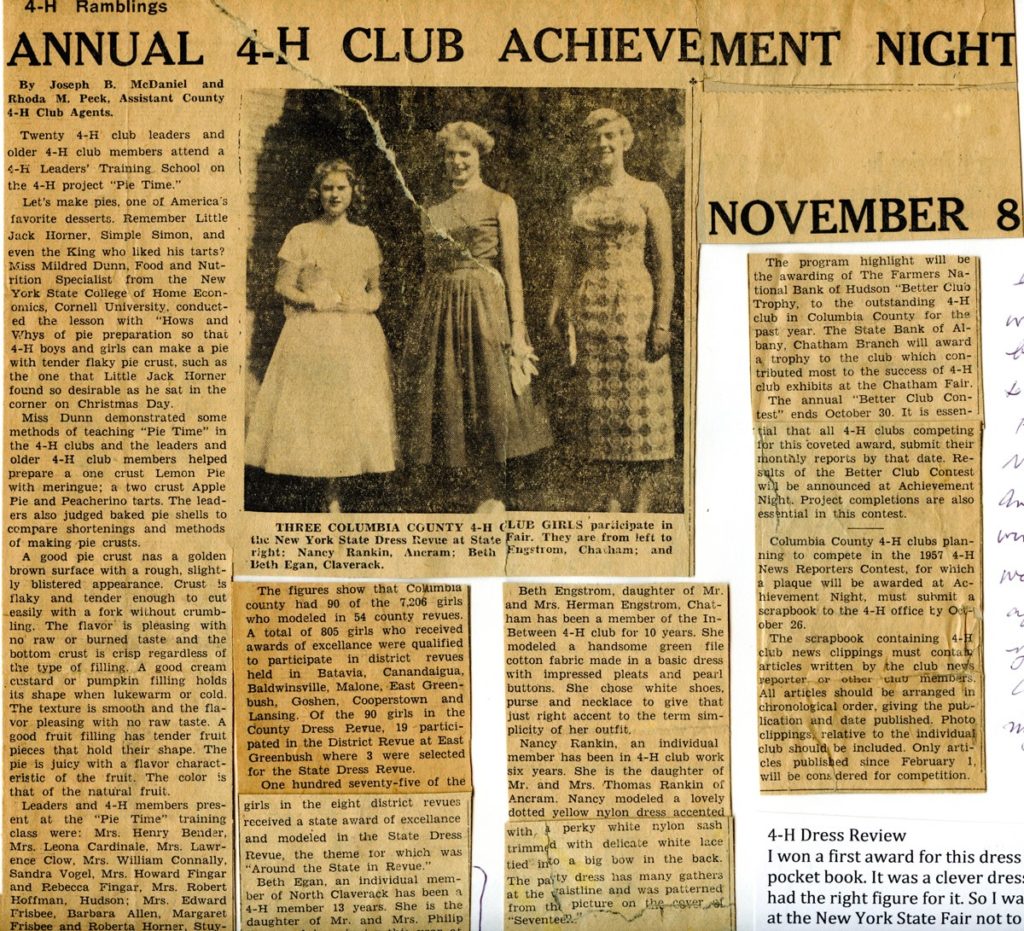 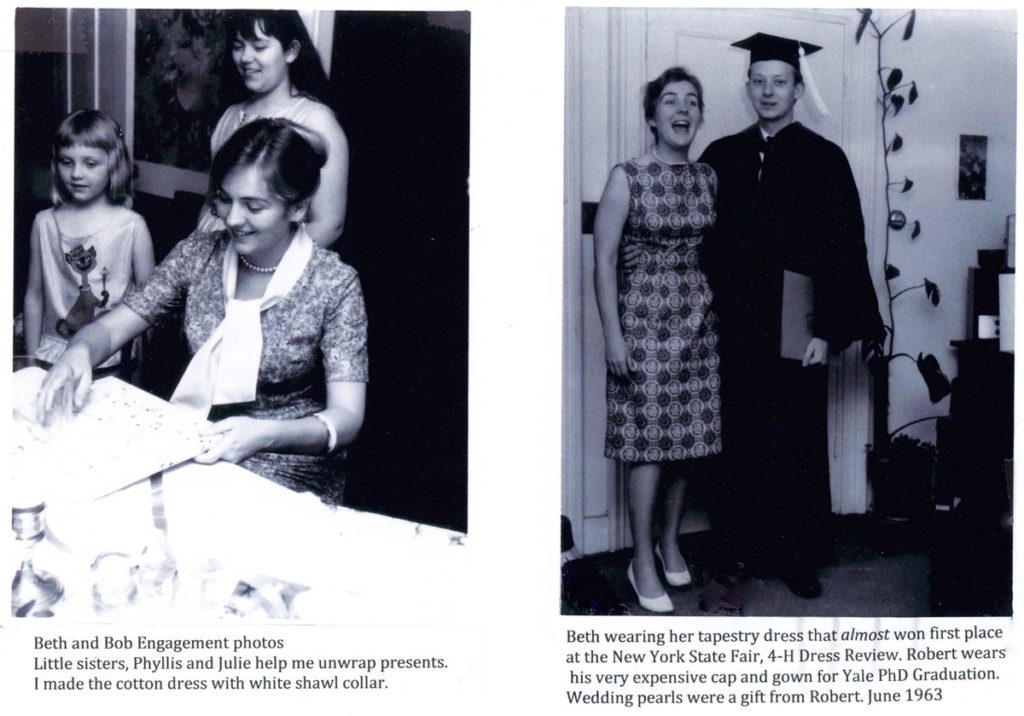 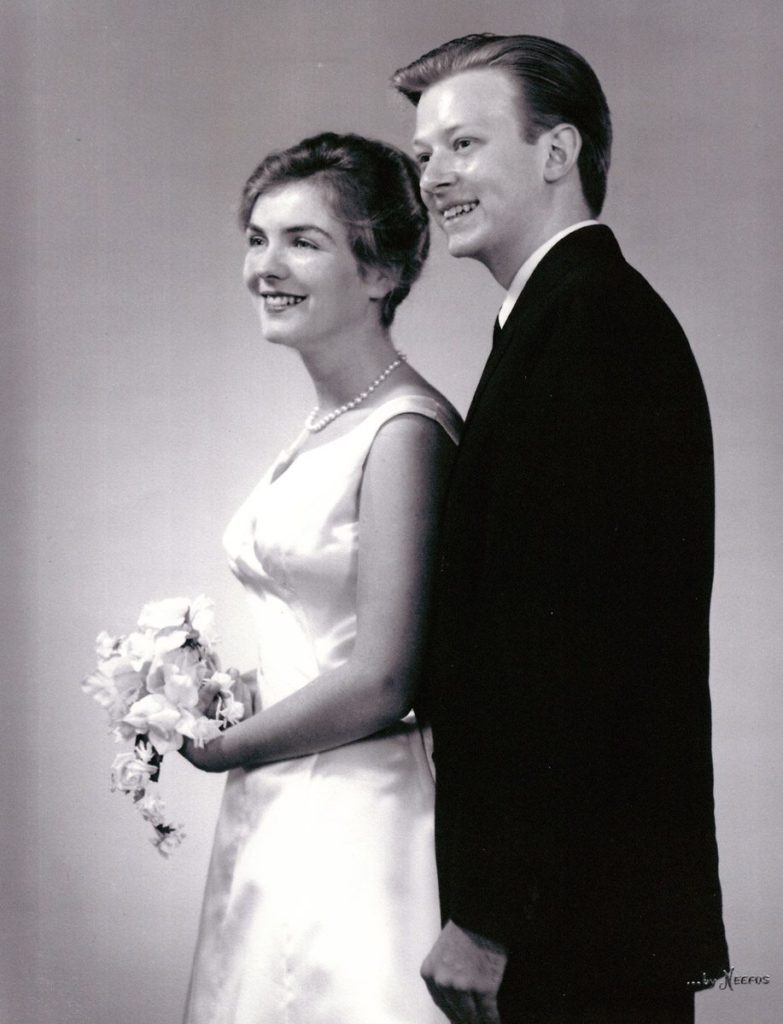 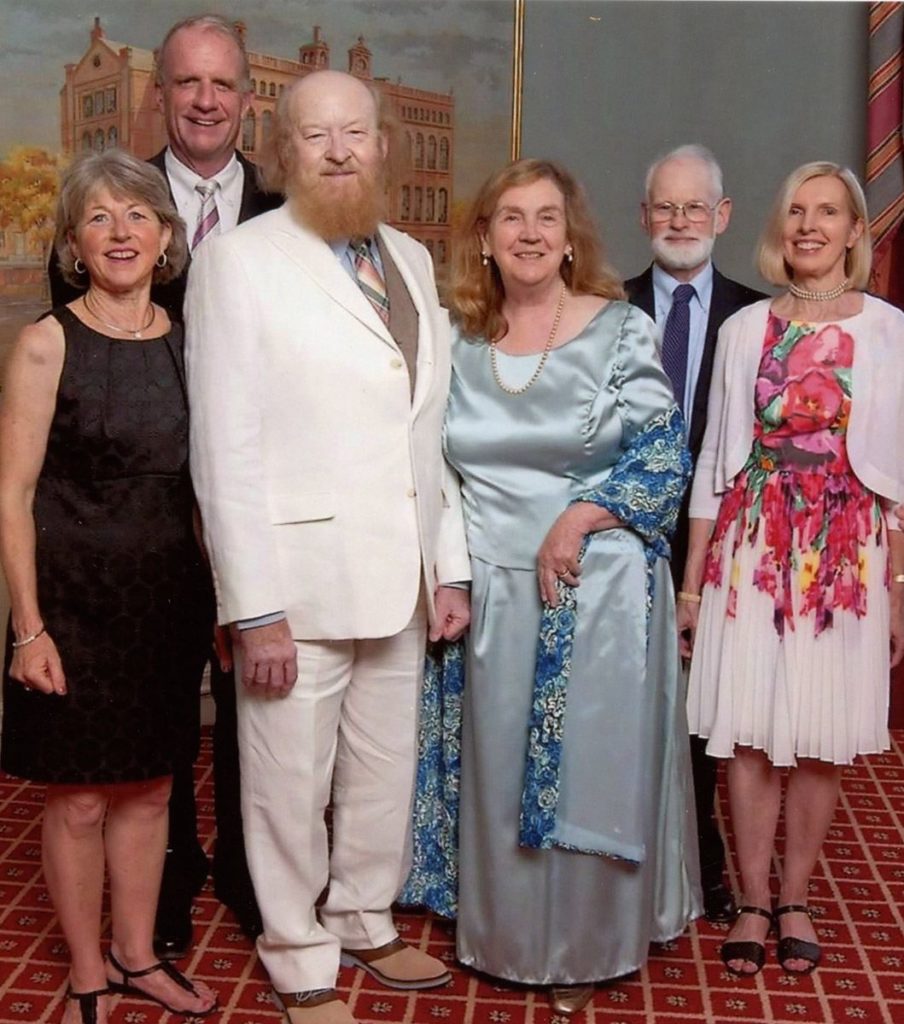 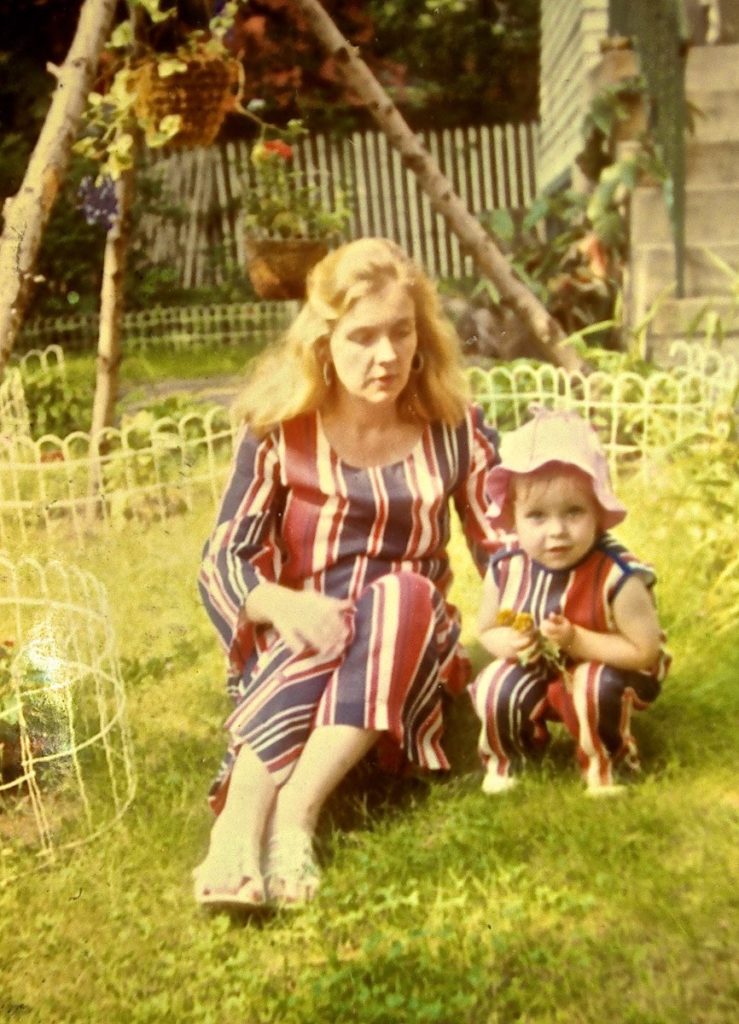 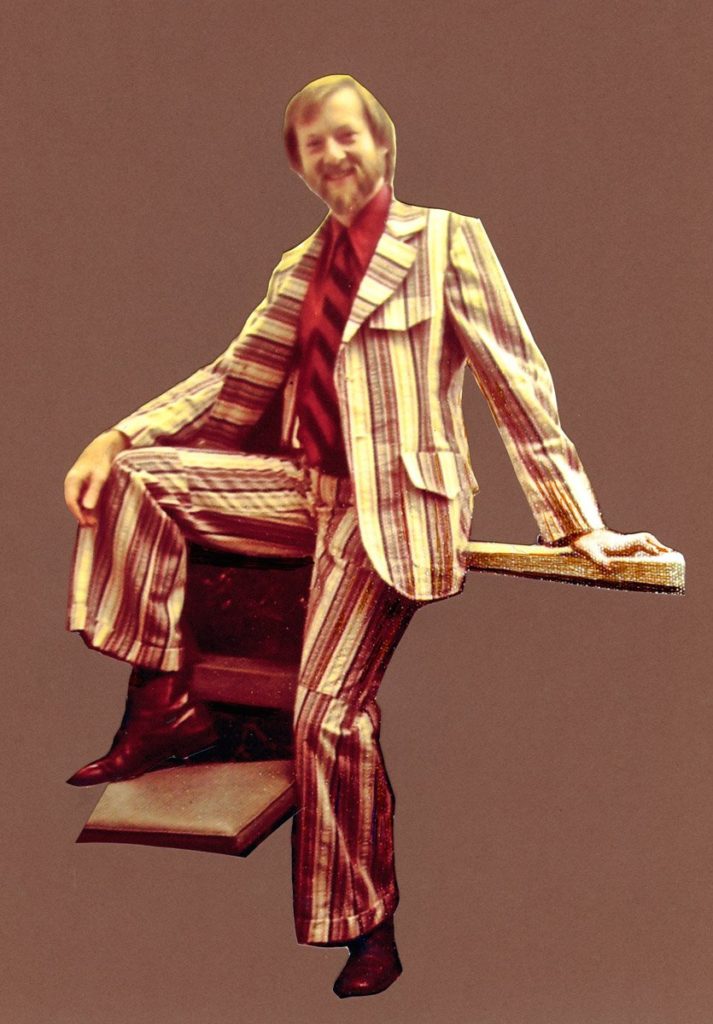 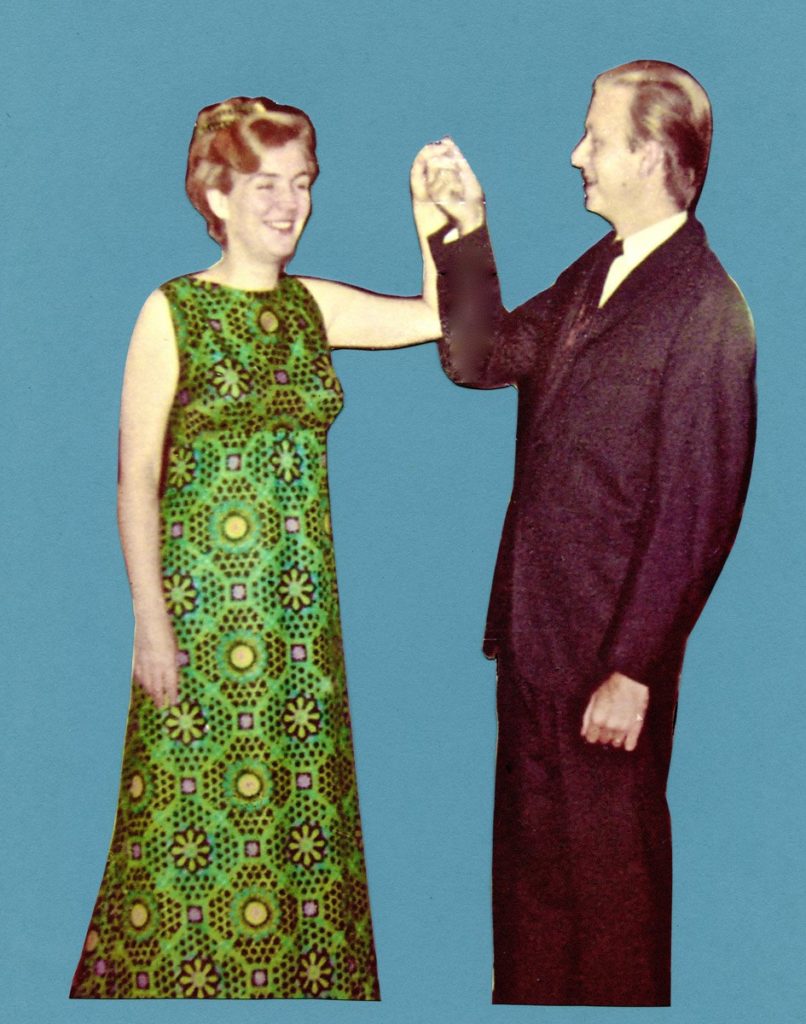 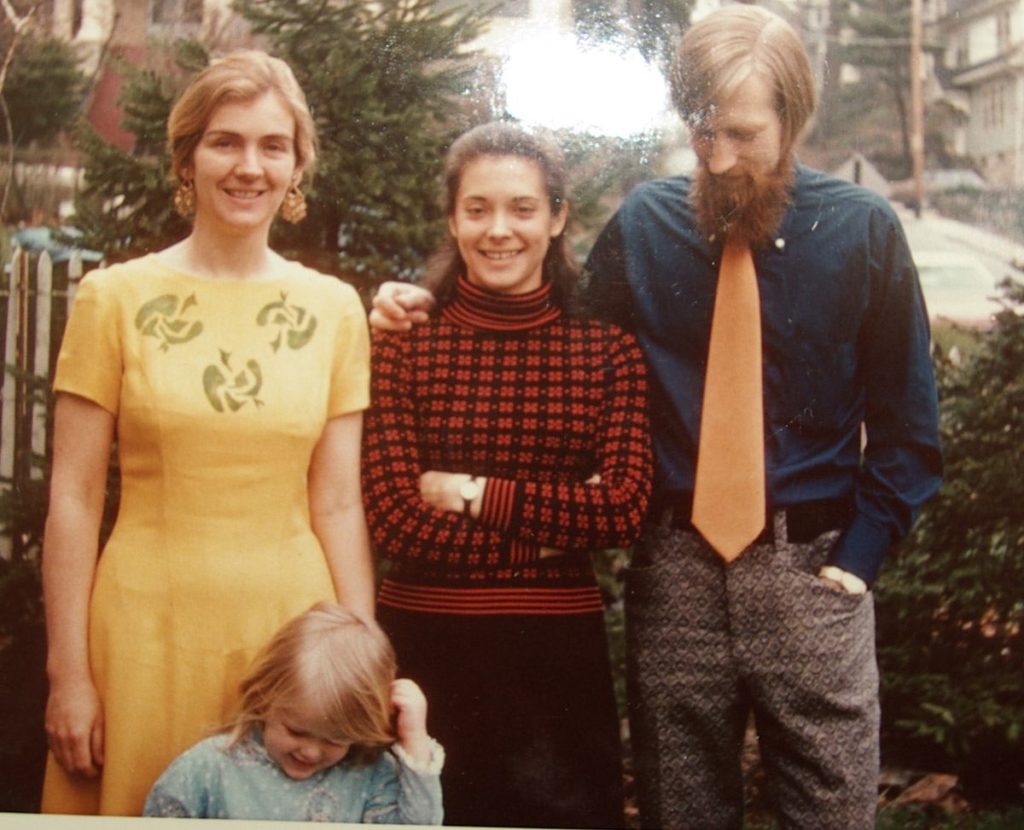 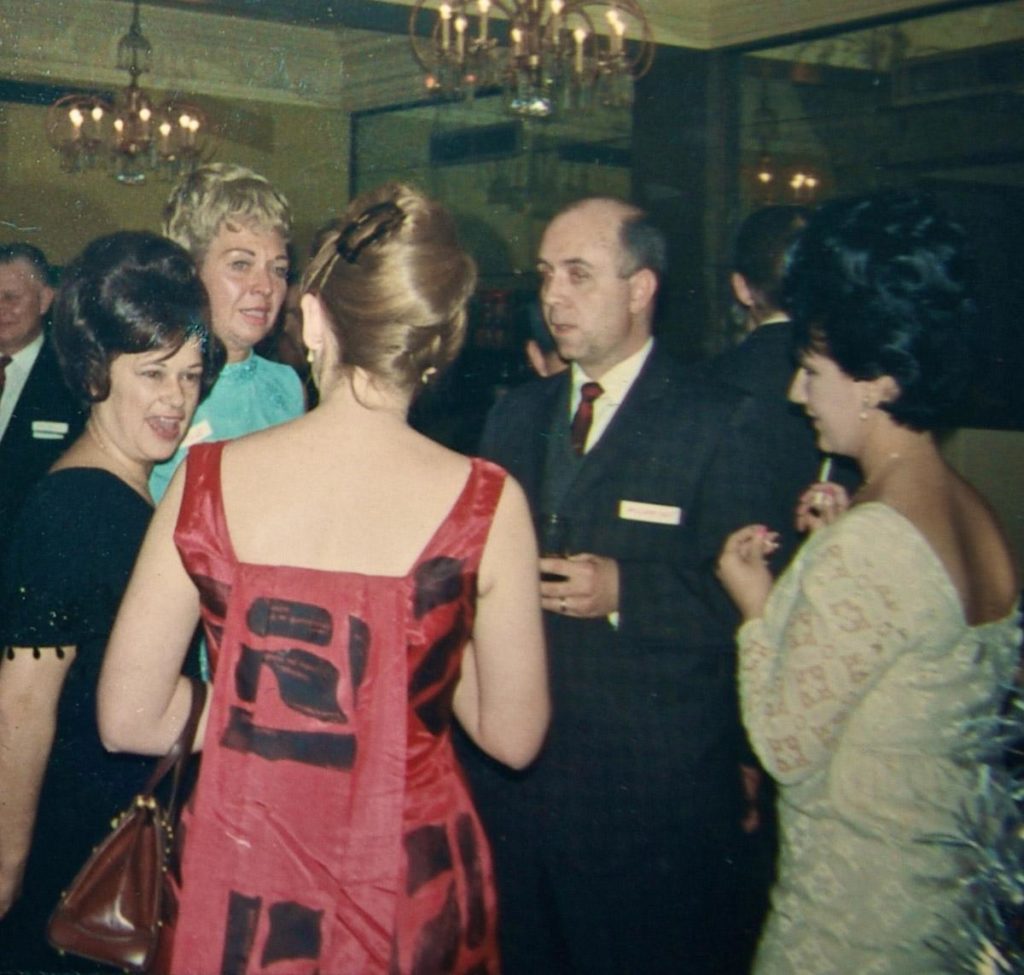 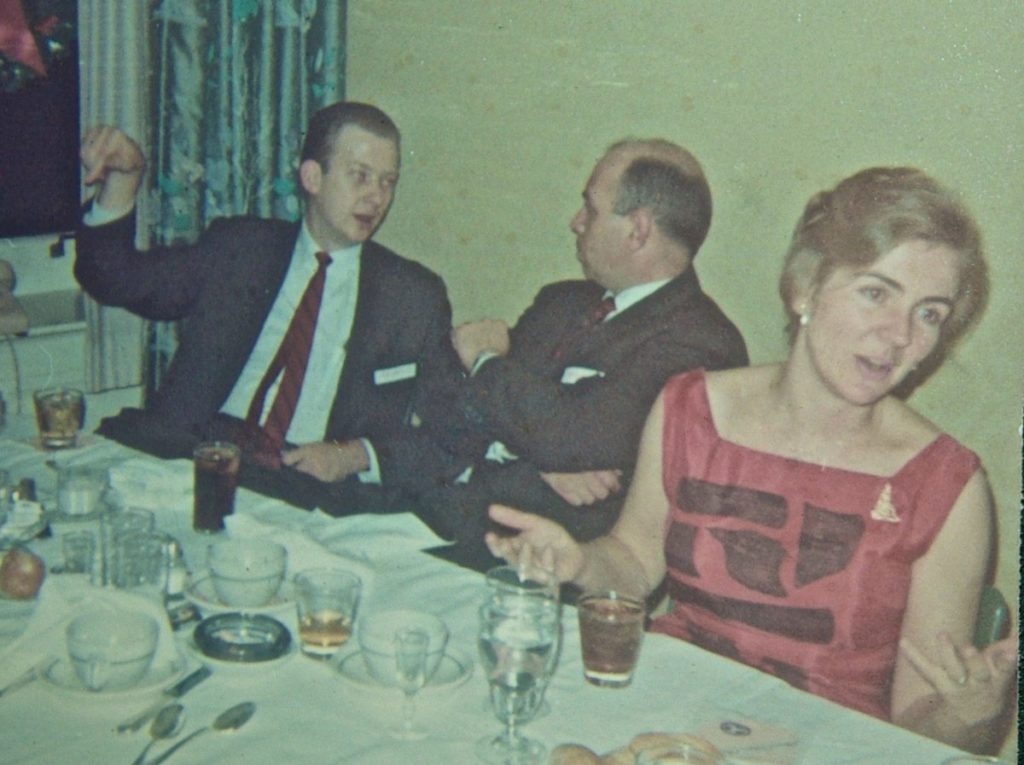 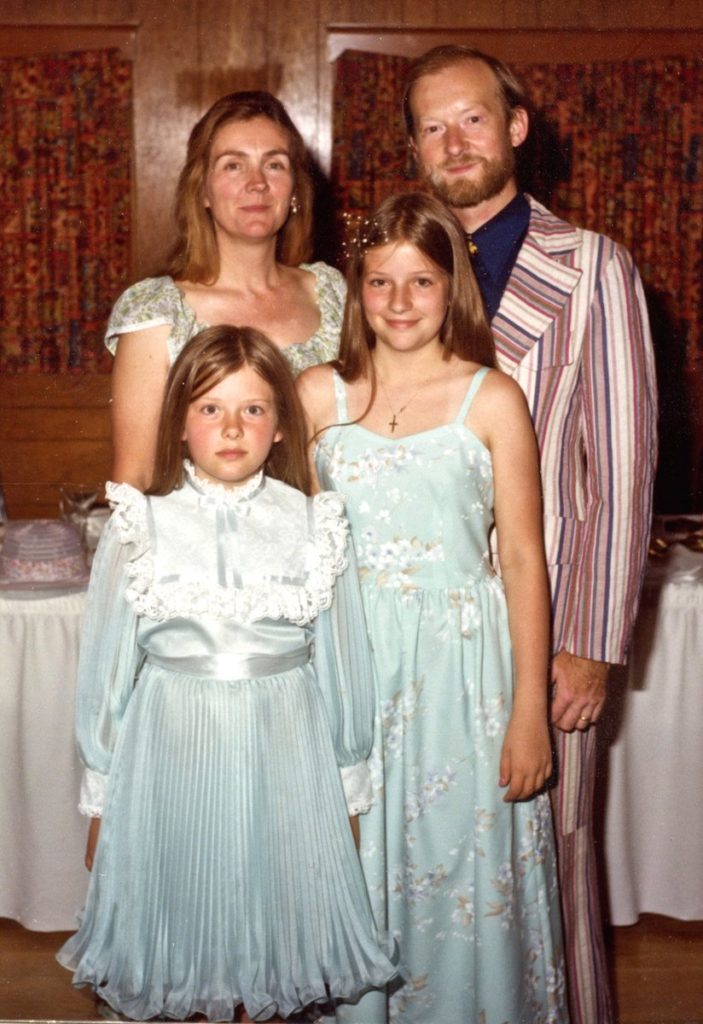 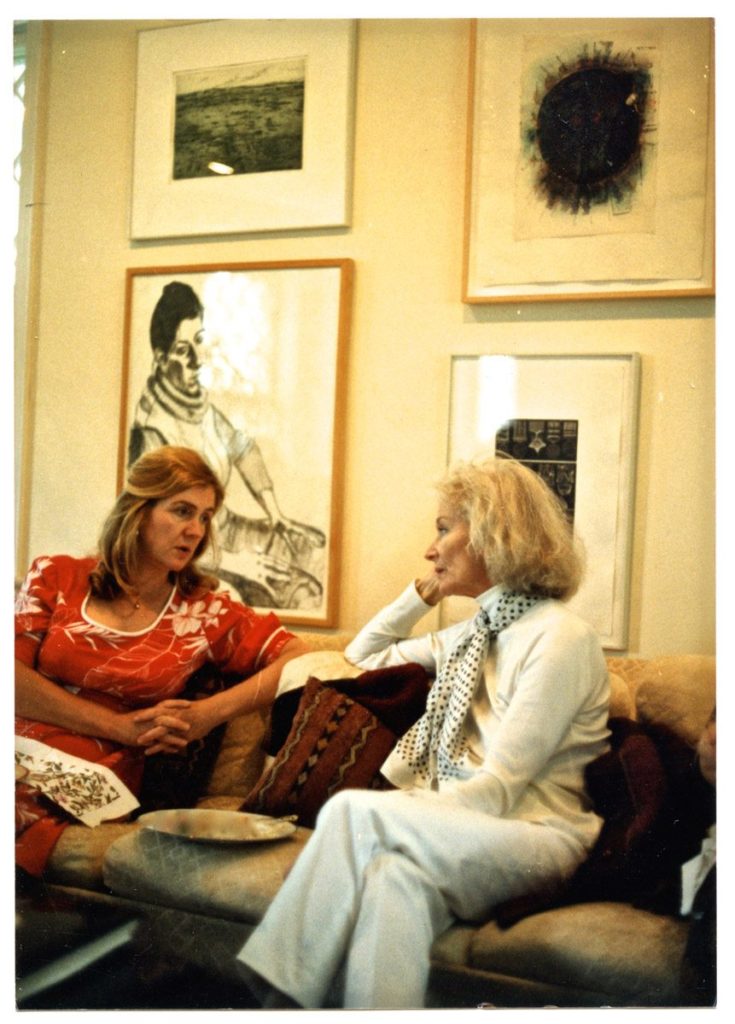 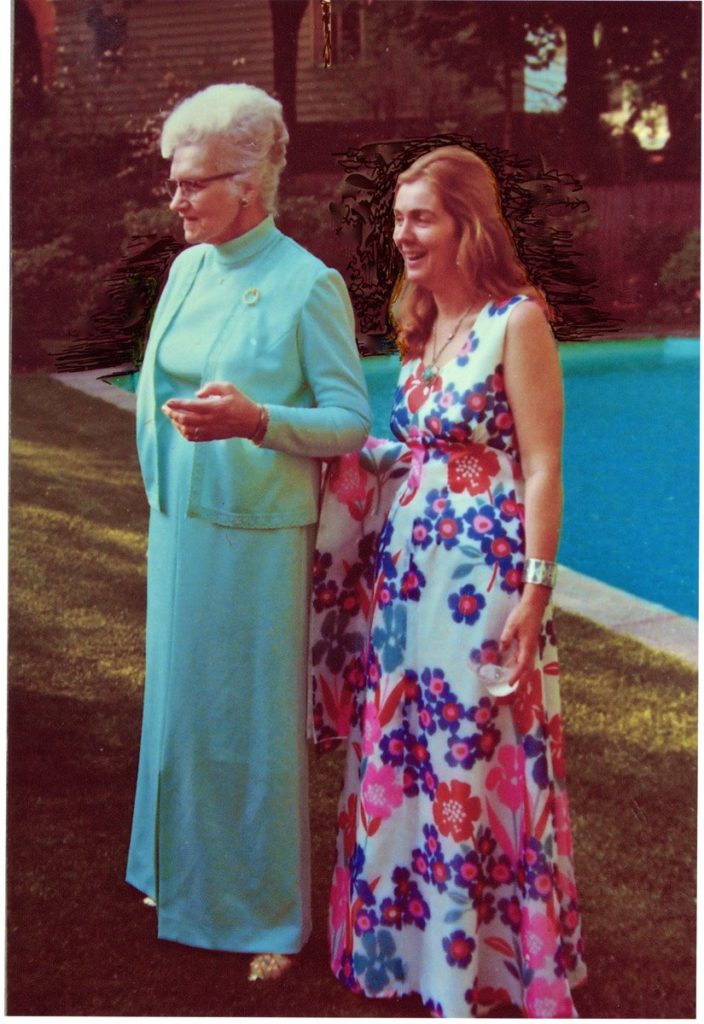 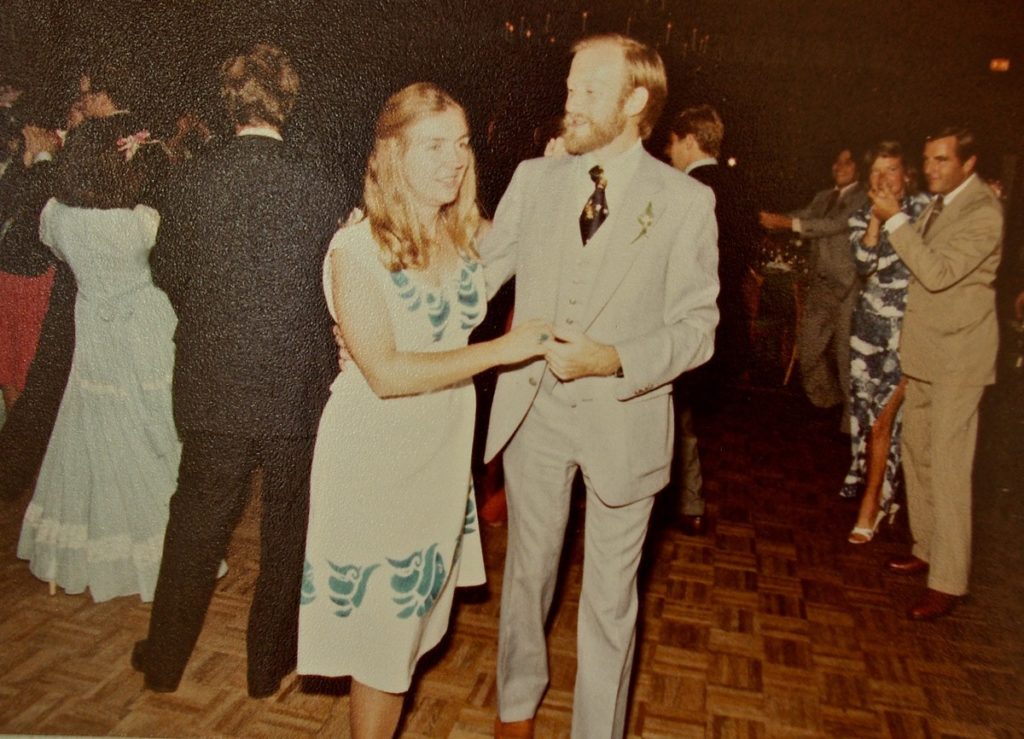 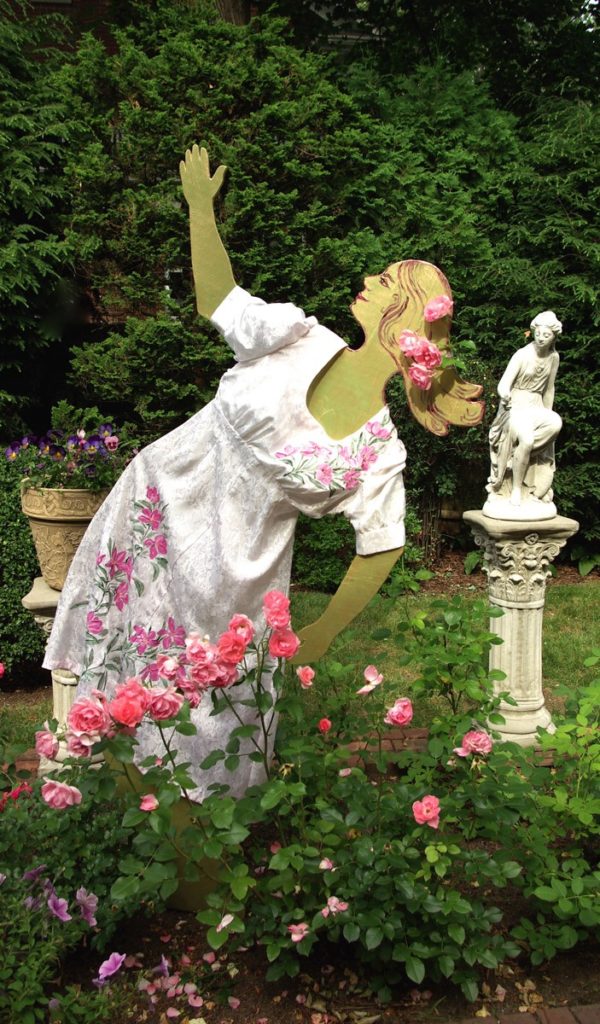 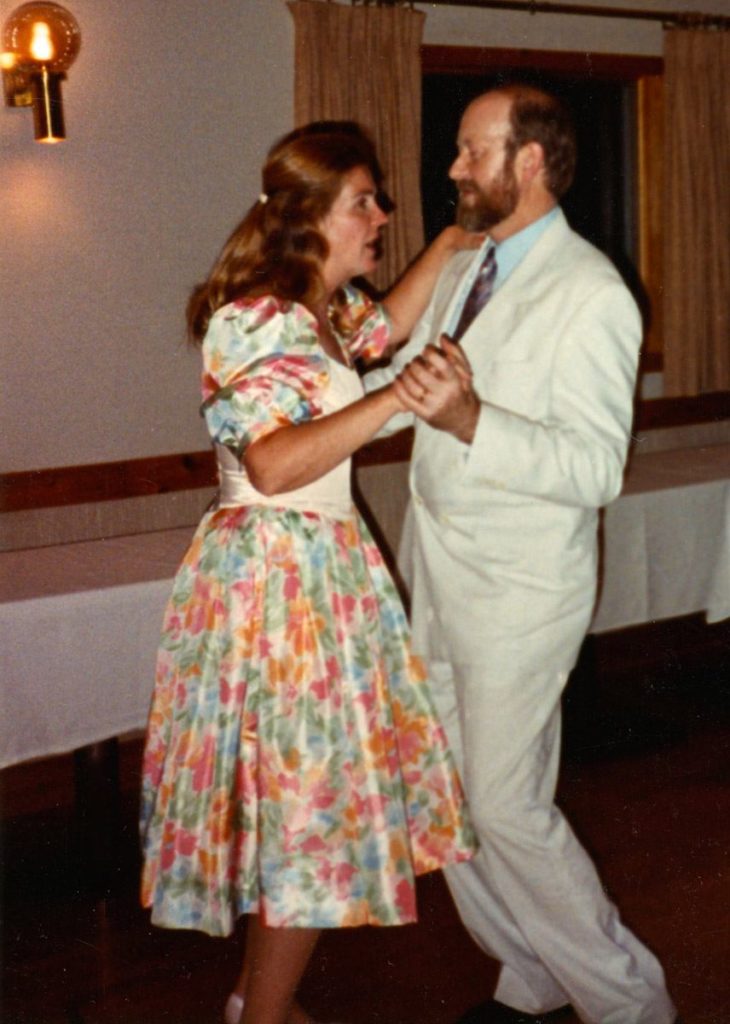 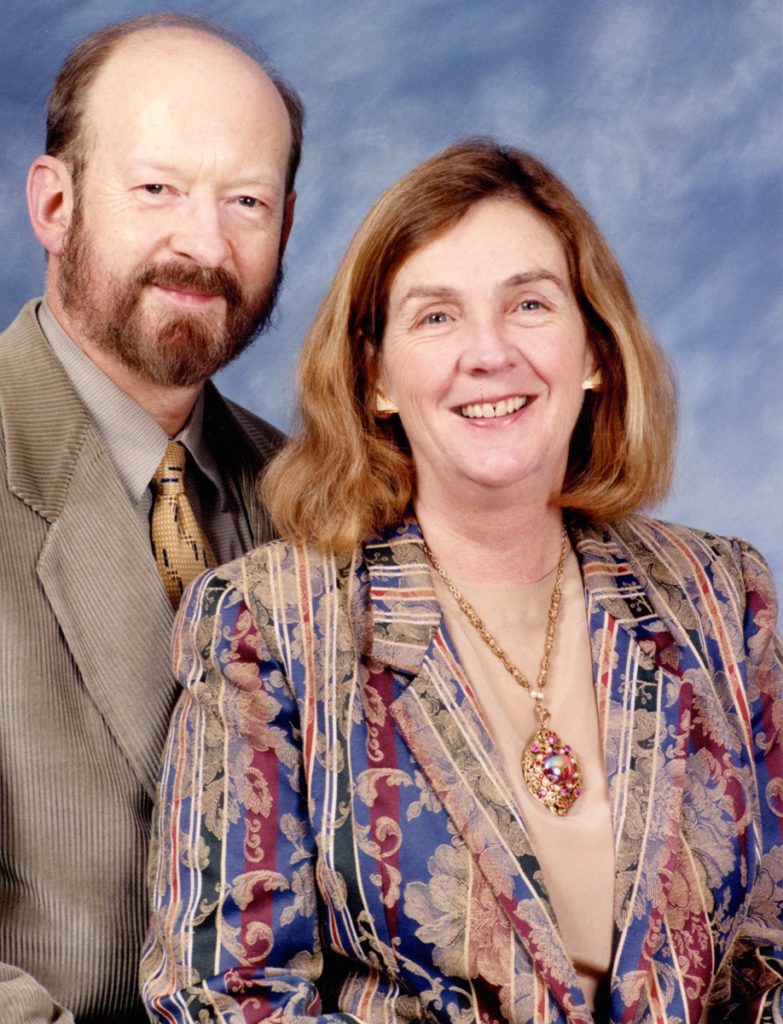 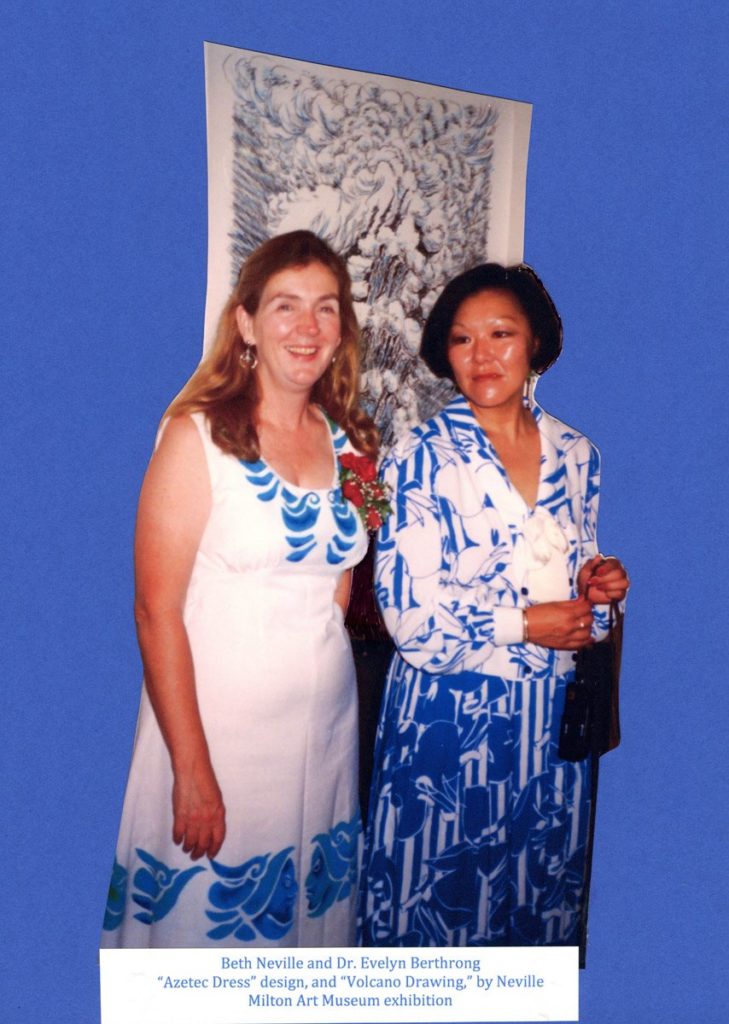 21 Beth Neville, hand stenciled dresswith Evelyn Berthrong, MAM
1 2 Next »
Many of the works on this site are available for exhibition or sale. Please contact the artist for additional information.