A Birth and Death Narrative.

Describing on a public web site the birth and death of our first child is most difficult. Anyone who has experienced a child’s death will understand. You legitimately may ask, “How could you draw your baby while she was dying?” My answer is, “That is what artists do.” They draw life and they draw death. The origin of my many works of art about death, war, and violence lies in the story of Gwendolyn Elizabeth’s short life, with its happy and sad moments.

The first drawings of Gwendolyn were when she was in my womb, as I did many self-portraits of myself nude and nine months pregnant, Needless to say, those will not appear on this web site. “Beth Pregnant” (#01), depicts the about-to-be-mother, calmly sitting in our bat-wing chair. Painted in May 1966 it is a pair with (#43), a painting of Robert standing behind the same chair; but the chair is empty, a harbinger of future events.

The birth-labor for baby Gwendolyn was so fast that she was almost born in a friend’s car on our way to the Bronx Hospital. The doctor snapped at me, “What took you so long to get here?” Her birthdate was June 4, 1966.

Gwendolyn appeared to be a perfect little baby girl with blue eyes and blond hair. The doctor declared her healthy at 6 pounds 7 ounces. Gifts of flowers began coming to the hospital and two days after her birth I drew them with pencil on paper (#02). In retrospect it is sad to see that some flowers had already wilted. Four days after birth, I drew Gwen in her hospital crib, an apparently healthy baby (#03). Gwendolyn slept under her flower blanket (#04) hardly ever crying or fussing. I drew her sleeping in the Egan family crib, age 17 days (#05, #06). Robert held her, so tiny, in his great long arms (#07). She was still small at six pounds, had trouble nursing and often fell asleep while trying. In (#09) she is in the crib, but how wonderful with a little smile on her face. Next, (#10), she is looking stronger, holding her head up, dressed in a frilly pink dress, well protected by Robert. But she didn’t grow, didn’t gain weight and had a “weak cry.” The pediatrician said, “Oh, she is healthy, but why don’t you stop breast feeding her? That is the problem.” Well, no! That was not it.

Bob and I took Gwendolyn, dressed in a blue jacket, out for a walk and we took our best photographs of her (#11). She was bright, pensive, patient, but rarely smiling. My drawing (#12) was made April 6, 1967, based on that photo. Drawn after her death, Bob looks strained and the baby barely alive.

The “Raven of Death, Pecking” (#13) arrived in late July when Gwendolyn was about three months old. She had gained no weight and didn’t smile. We took her to my parents’ home in Hudson, NY, and I put her on a table next to my friend’s baby born on the same date. We are shocked, little Gwen weighs about 7 pounds and the other baby weighs 15. Our Gwen is pale, quiet and passive. We take her to Dr. Elah Bliss, the family pediatrician in Hudson. She examines her, listens to her heart, thinks and thinks, but can find nothing wrong. On that visit I did a watercolor, “Rock and Birch Tree” (#33) in the Catskill Mountains. The young sapling struggles to grow among the boulders and stony ground, an apt metaphor for Gwendolyn’s short life.

During July and August her health got worse, she gained no weight, and vomited after nursing. I phoned the pediatrician and he dismissed it, “Oh she is just spitting up.” Well No! I kept dressing her in adorable dresses, put her in her favorite rocking chair, and desperately tried to feed her. One wonderful evening, age three months, she experienced better health for a couple of hours. She looked at me, giggled and did playful things. So happy, I grabbed the camera and recorded every moment. Bob was not home, and it was the only time she was well enough to laugh.

Finally, September 18, the “Raven of Death Searching for Prey” (#15), came flying in through the window and landed on the bed where Robert and Gwen were lying. I looked and saw that Gwen’s mouth was blue and she seemed unresponsive. We got a taxi and flew to the pediatrician’s office. He listened to her heart and practically turned blue himself: she was suffering tachycardia with heart-beats up to 300 per minute. We raced her to Montefiore hospital and there learned that she had a congenitally malformed heart. She was placed in a hospital crib (#18) in the Pediatric Intensive Care Unit along with other ill and dying infants.
Wearing a hospital gown, my own heart beating in utter panic, I found a paper towel and ball point pen and drew (#14) our baby in the oxygen tent, hooked up to heart monitor. I stopped breast-feeding to help her gain some weight and I drew Bob feeding her with the short bottle (#16). Still she did not gain weight. Doctors hoped that her malformed heart might be corrected with open-heart surgery. In “Robert and Gwen at the Crossroads” (#20), the baby nestles in daddy’s protective arms. But she mainly slept in the oxygen tent, (#22, #28), a little angel surrounded by the bars of a medical/jail and the “Raven of Death Cawing” (#23) by her bedside. In (#24), Robert smiles at his child but the “Raven of Death Lands”(#25) near them. “Gwendolyn Elizabeth Neville, June 4-Oct 10, 1966” (#27) is my last version of Gwen in the oxygen tent.

By the third of October it was clear to us and the doctors that surgery was the only chance to save her life. Robert held his little baby (#29) and rocked her one last time. I found a scrap of blue-lined paper and ball-point pen and sketched them. Then I took my turn holding and rocking her. The “Raven of Death Landed and Pecked” (#28, #30). My last portrait of Gwen’s face (#31), tells the story of her illness; how sad and painful a remembrance it is. “The Death Raven Cawed (#32). With excellent Montefiore surgeons operating she survived open-heart surgery (#37), and for one day her heart beat normally. She recognized us and smiled a sweet happy smile. But the “Raven of Death” returned and lighted by her side (# 34). After six days her heart stopped beating and she died. And oh. the grief tears that are falling down now as I write this, a year after her 50th birthday.

The funeral service at St Stephen’s United Methodist Church, Spuyten Duvil, Bronx, NY, was attended by over 100 of our African American congregation friends, family, and Fordham University teachers and students. A beautiful ray of sunshine streamed though the stained glass window and lit the coffin. Gwendolyn is buried in the family cemetery of the Reformed Church of America, Claverack, New York where we were married.

I continued to do artwork pertaining to her death. “Tree Dying in the Bronx” (#39) was painted near where we lived. Creatively, I was making photomontages and “Tiger in the End, Eats All” (#41) is a terrifying vision of bloody-mouthed tigers eating sweet babies in wicker baskets, like the one we used for Gwendolyn. The work reeks of death. “Gwendolyn Neville” (#47), is a reworking in pen and ink, of one of my favorite drawings of her (#04). In “Gwendolyn, God Glorifier” (#49) I tried to come to some peace by imagining her as part of a heavenly chorus of innocent babies in some protected place. To the right, a white-robed, jubilant angelic chorus is reassuring. But the sparkling central figure wears a terrifying mask of death.

The sepia painting of Bob by the empty chair (#43), was made several weeks before Gwendolyn’s birth. But after her death it came to symbolize the lost of our baby. At this time I also had a miscarriage, in many ways equally devastating as Gwendolyn’s death. At that time I painted “Self-Portrait with Flowers (#45).” I thought it was simply a self-portrait, but Dr Irma Jaffe, art historian and friend said, “But Beth, you realize what you painted… there is no baby, just the empty lap and the sad flowers, all pointing to the empty womb.” She was right on the mark with that comment. The ink drawing (#51), “For Gwendolyn We Pray,” a statue of a Saint holding a Cross points to a Classical building with a Christian Cross over the door. It seems a fitting memorial to our lost child.

In the next two years I gave birth to two healthy daughters, 1968, Naomi Louise Neville and 1970, Leonora Alice Neville. We have four healthy grandchildren. Beth Neville 2017 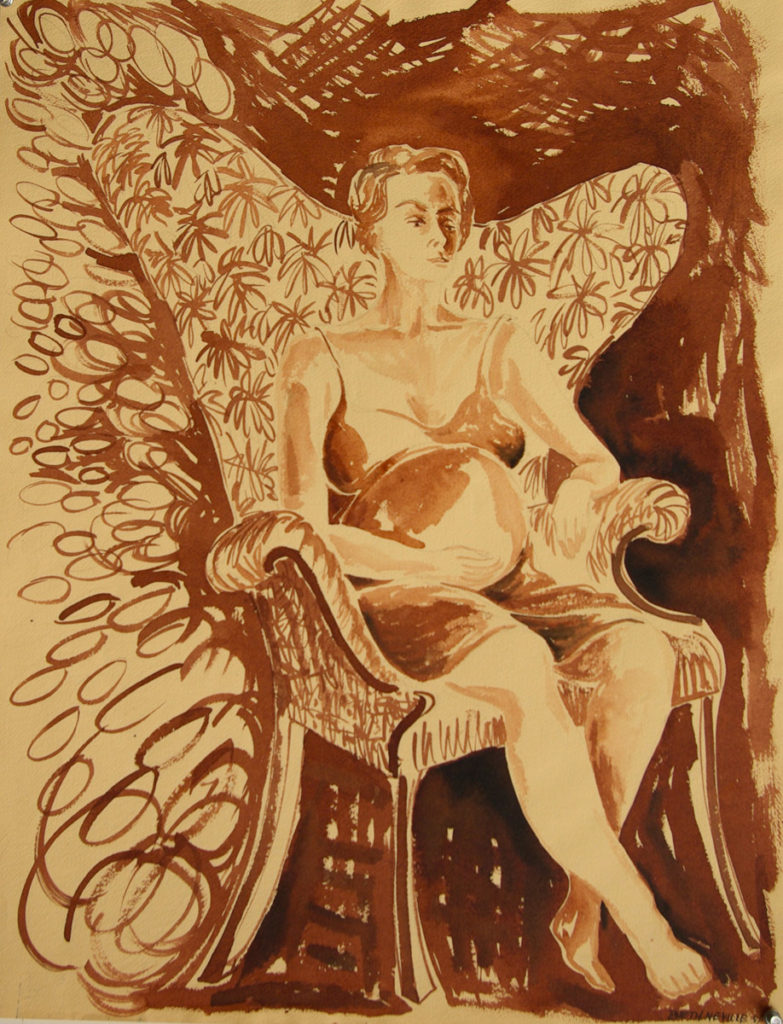 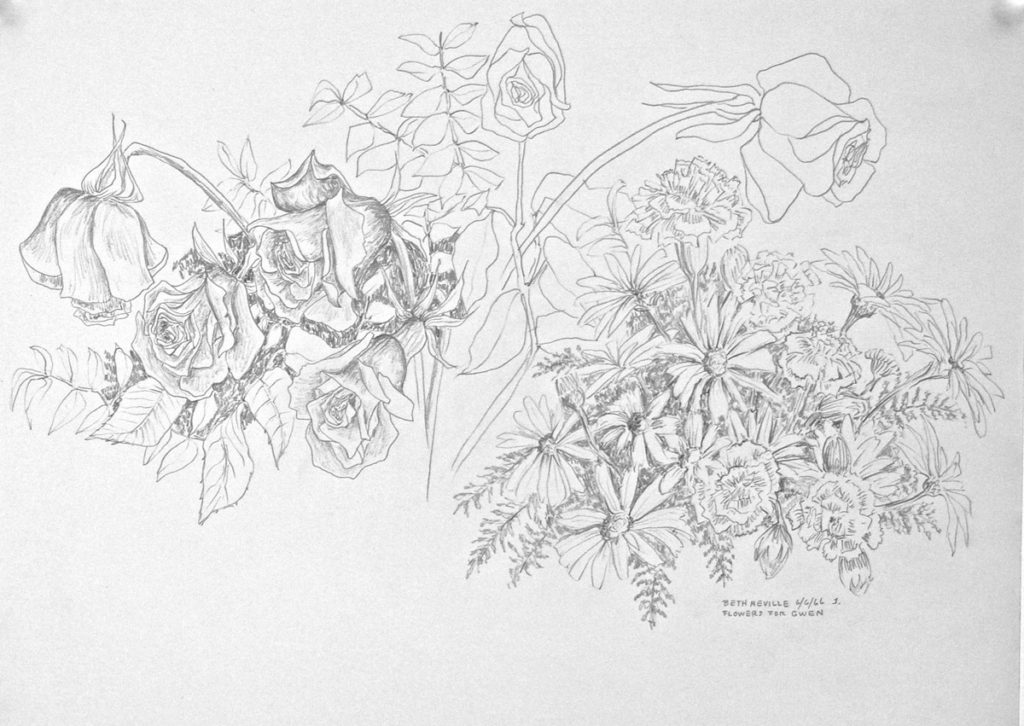 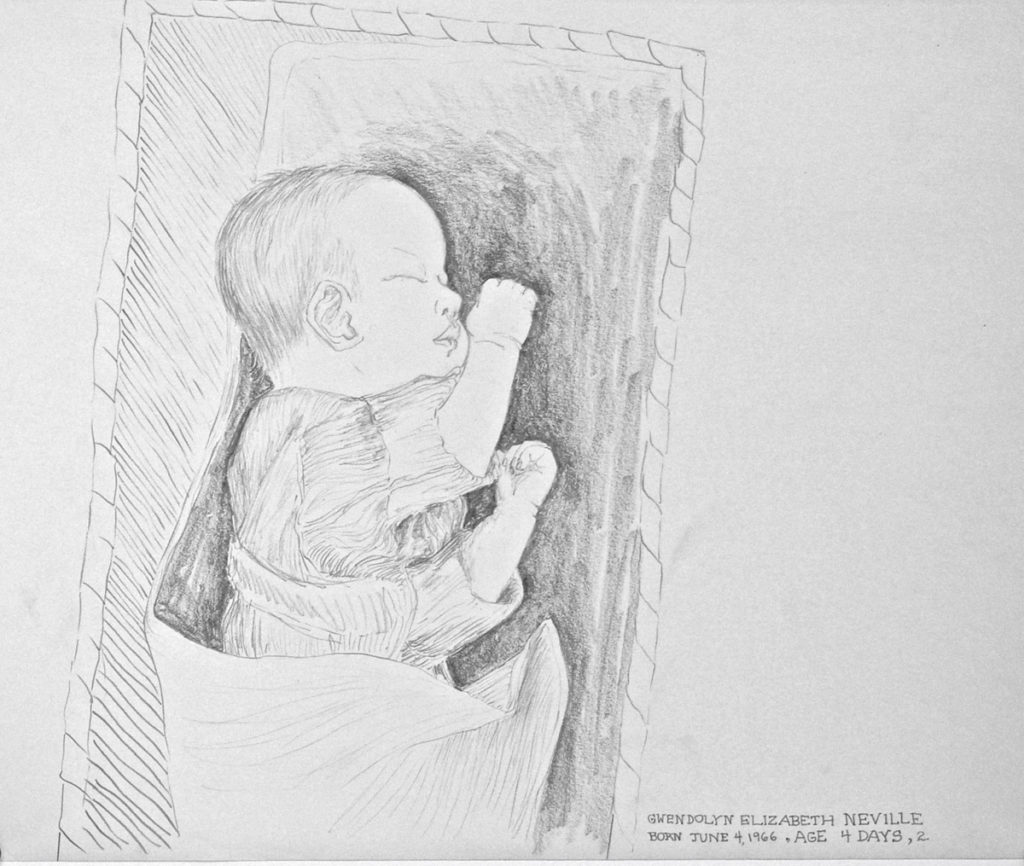 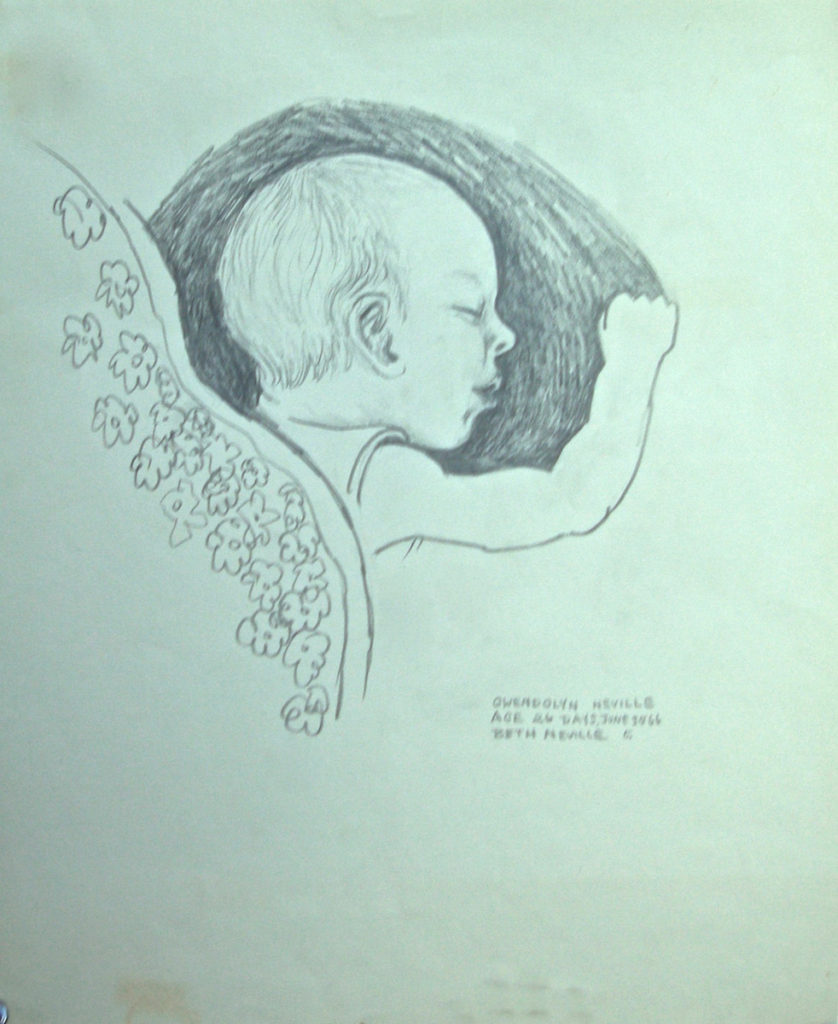 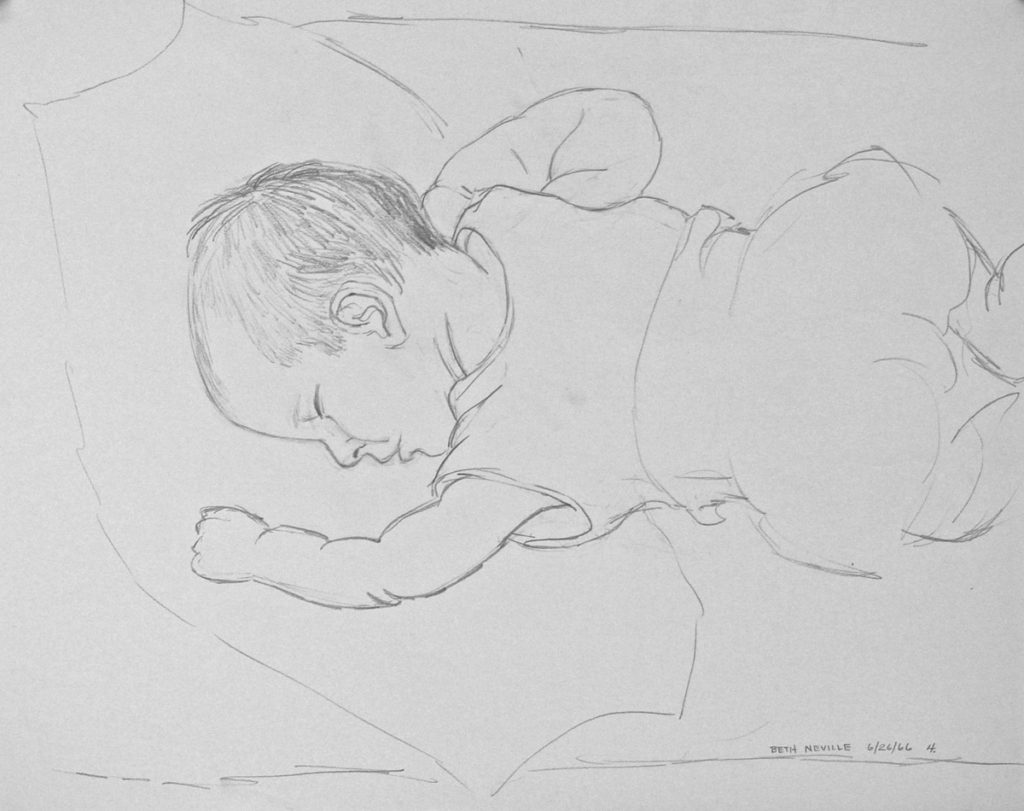 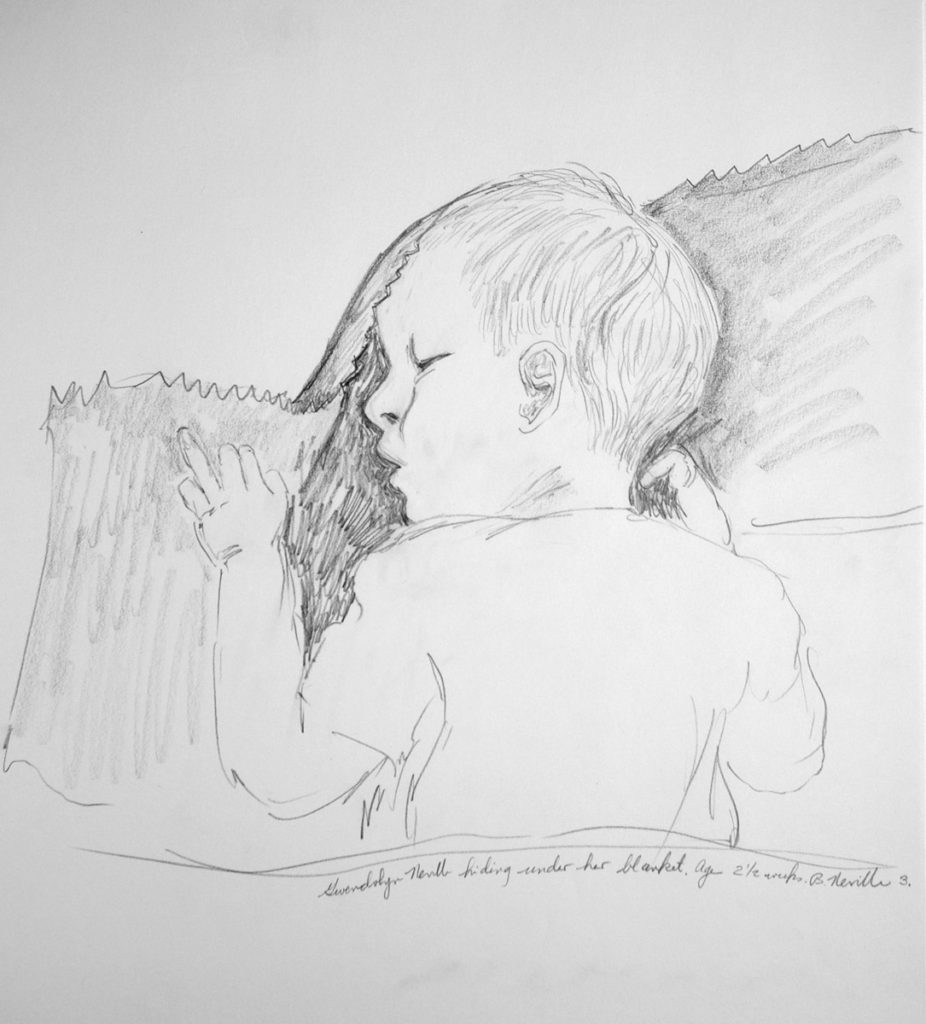 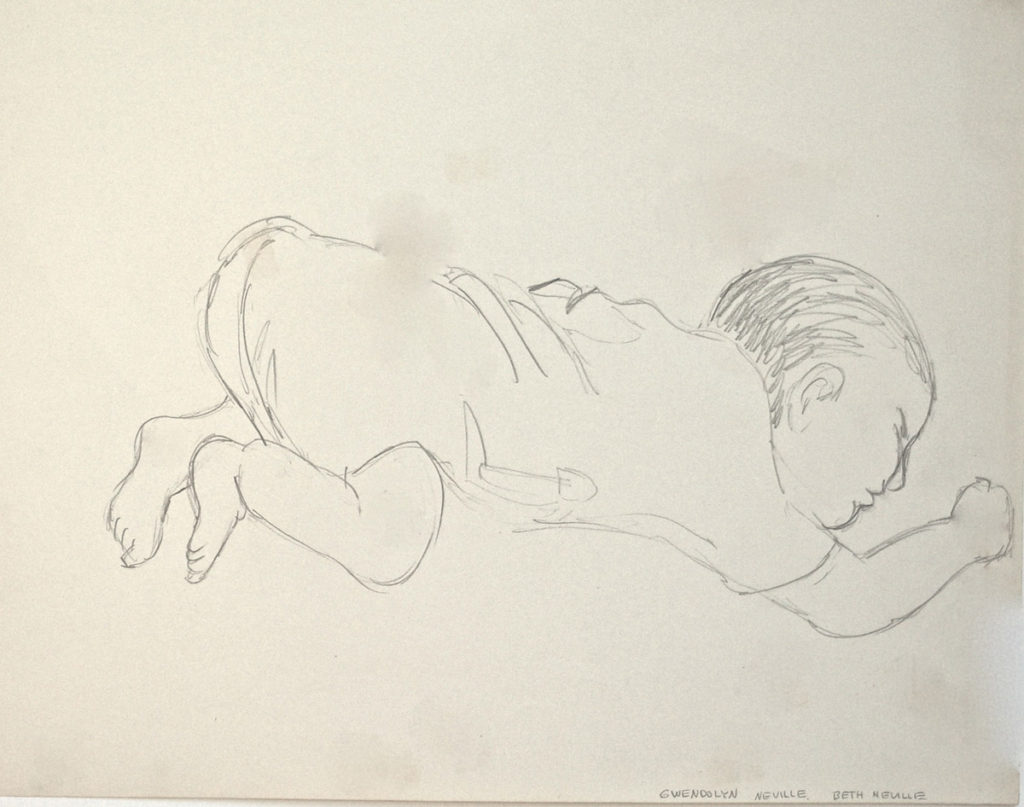 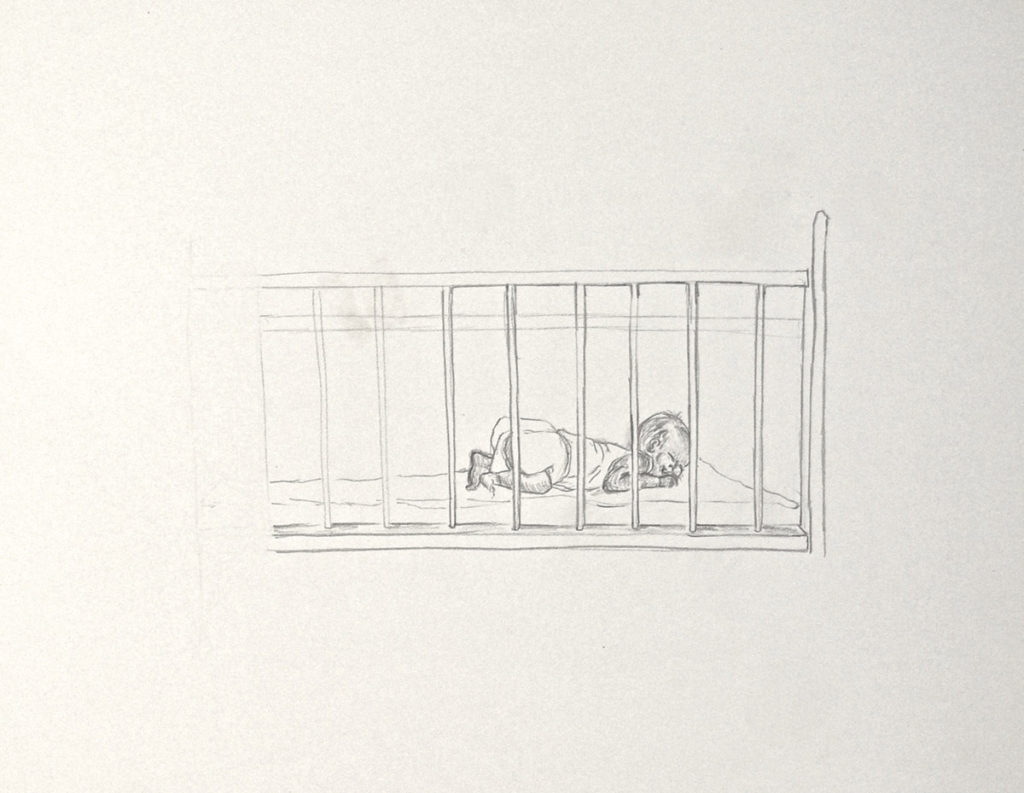 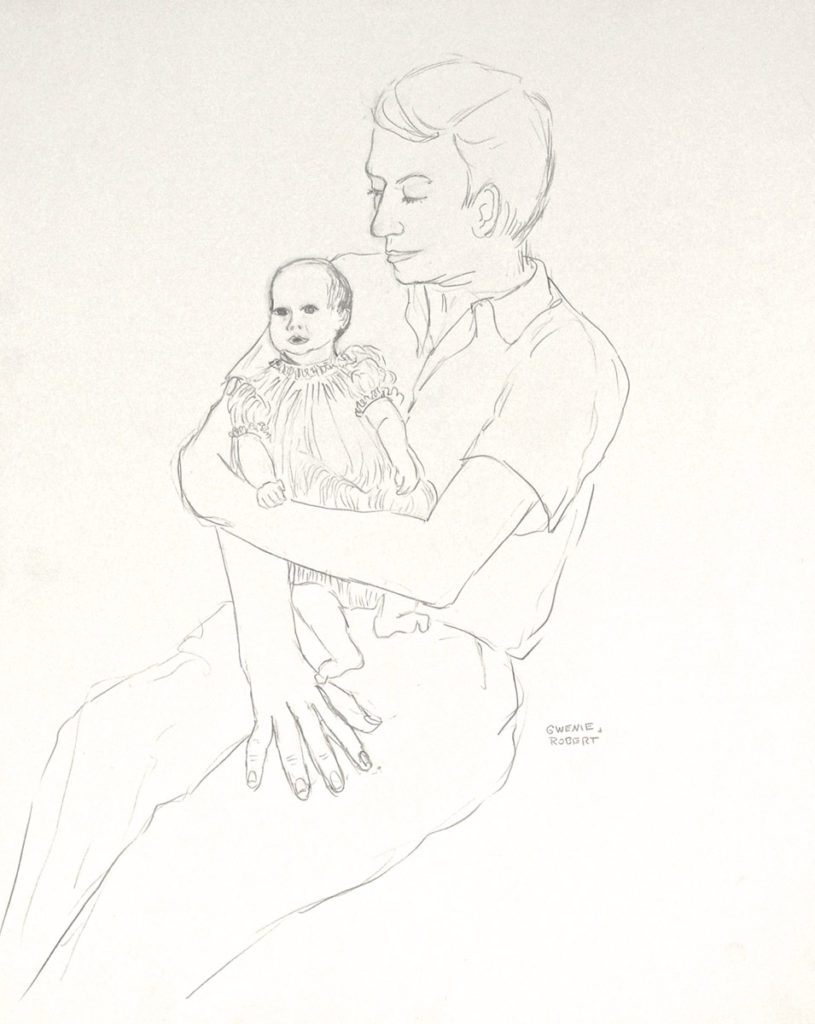 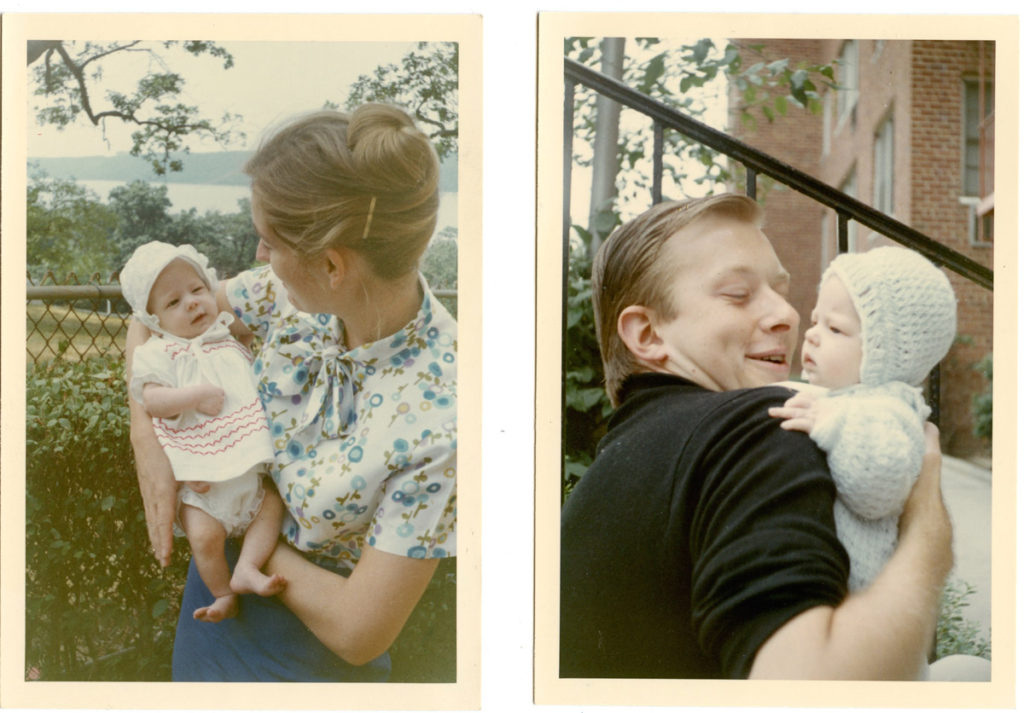 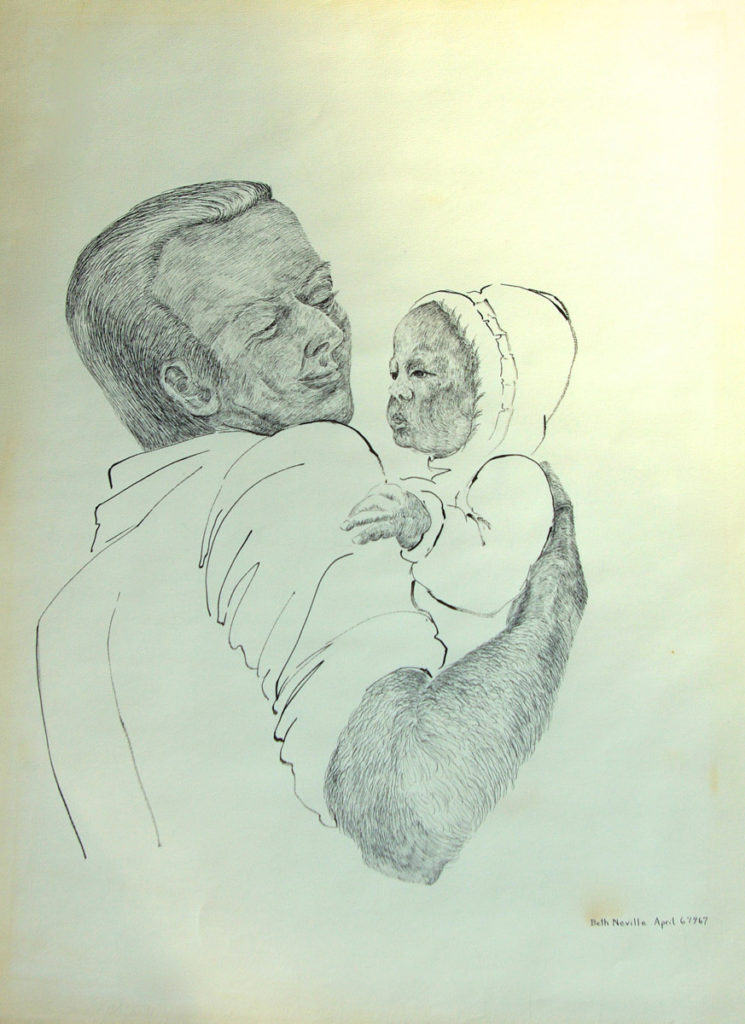 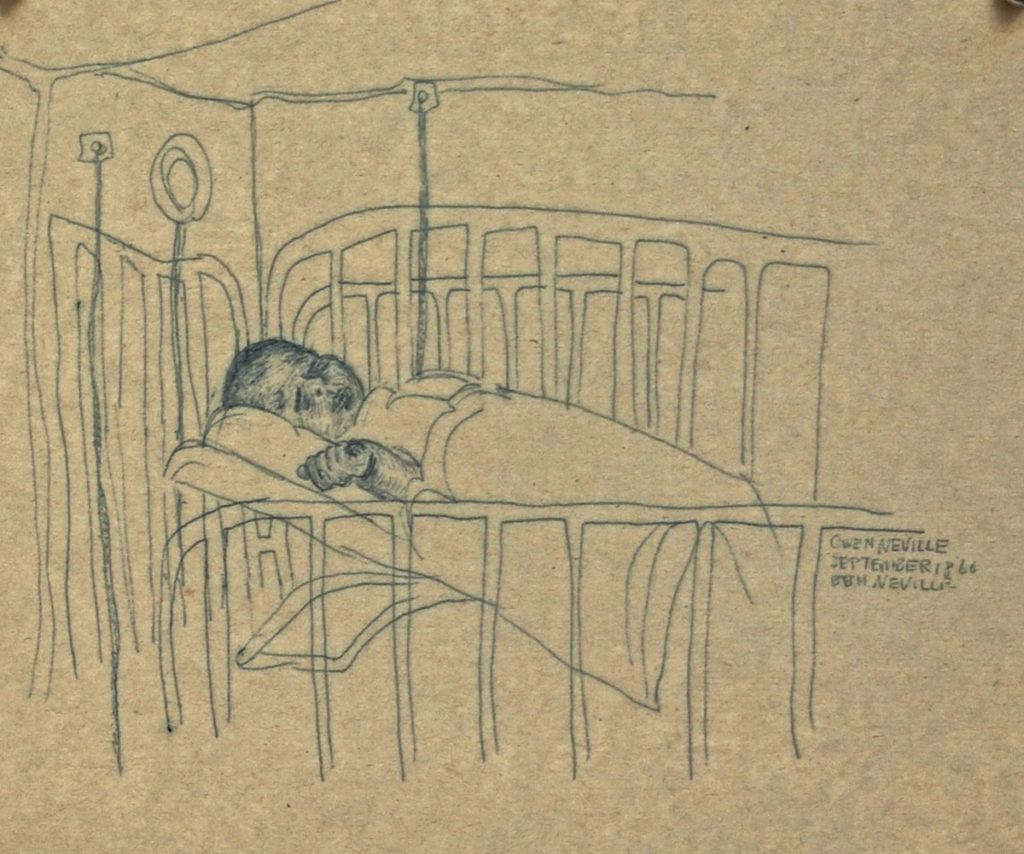 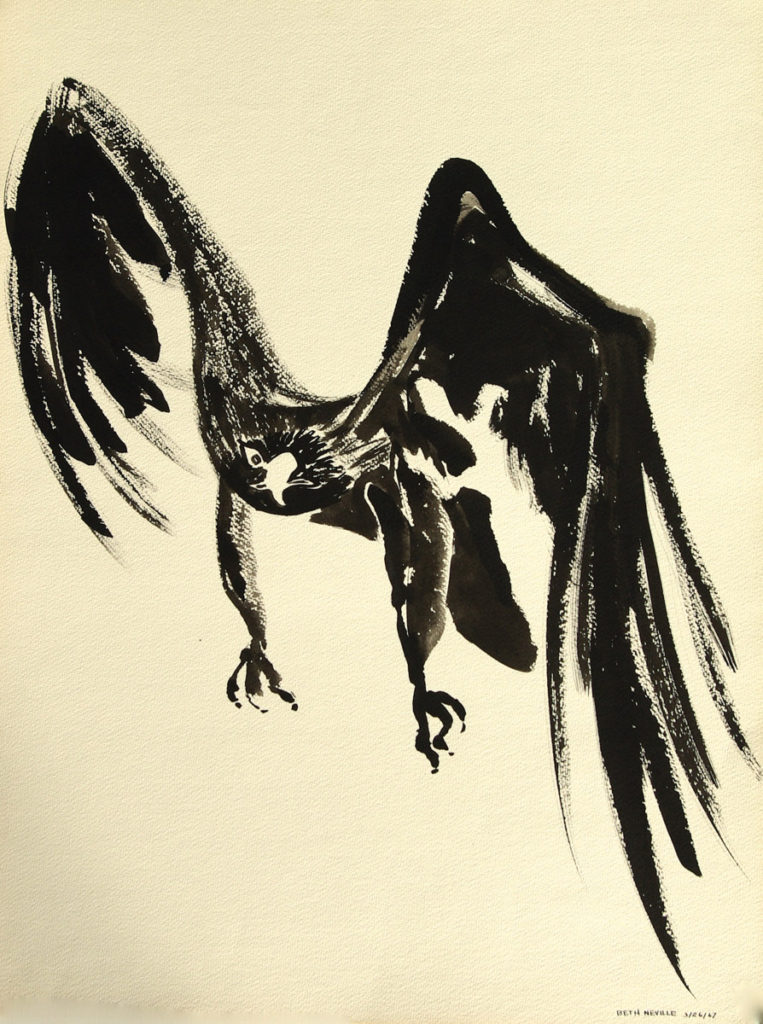 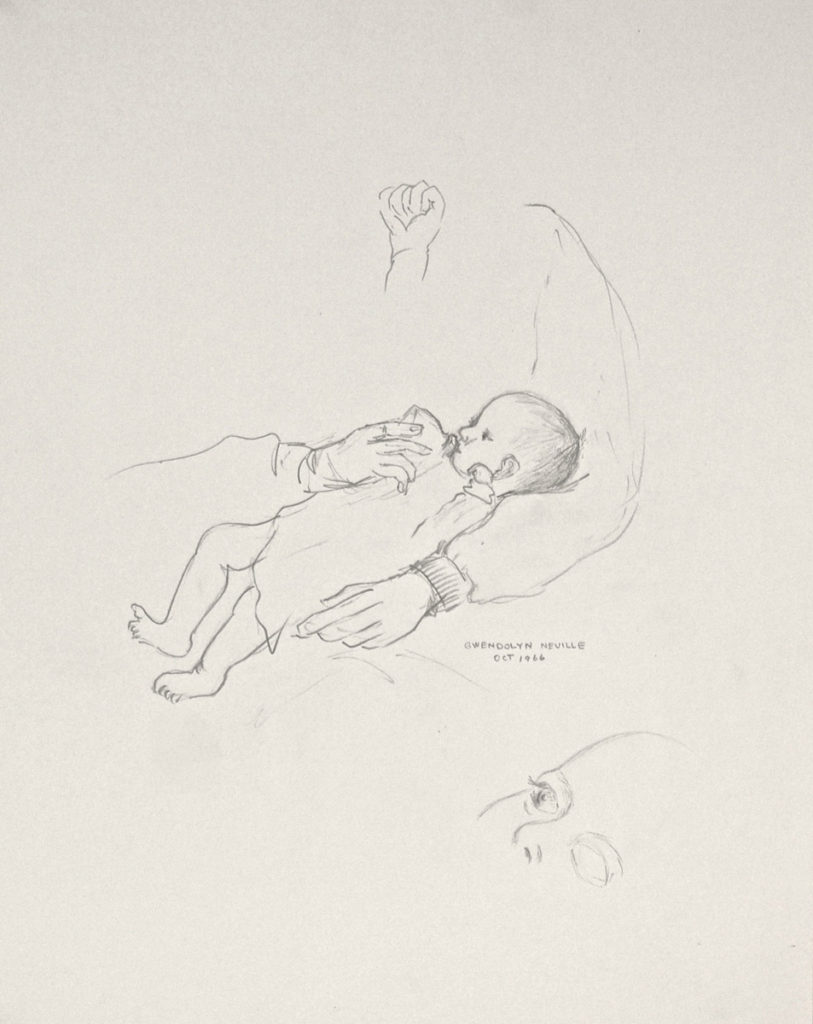 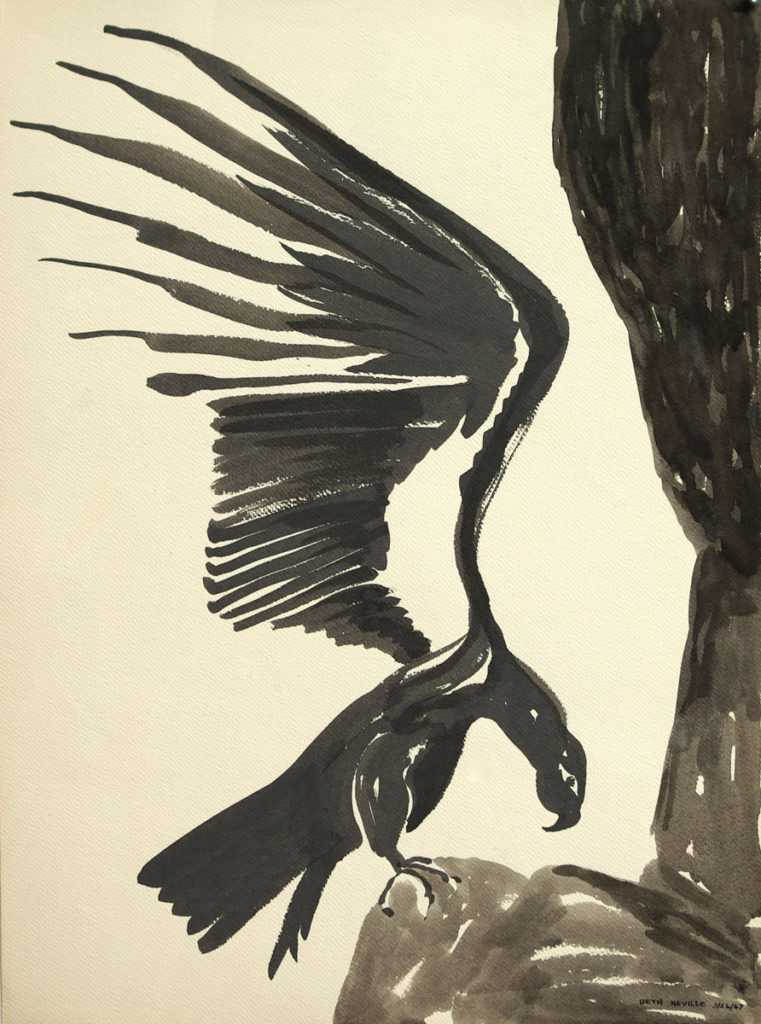 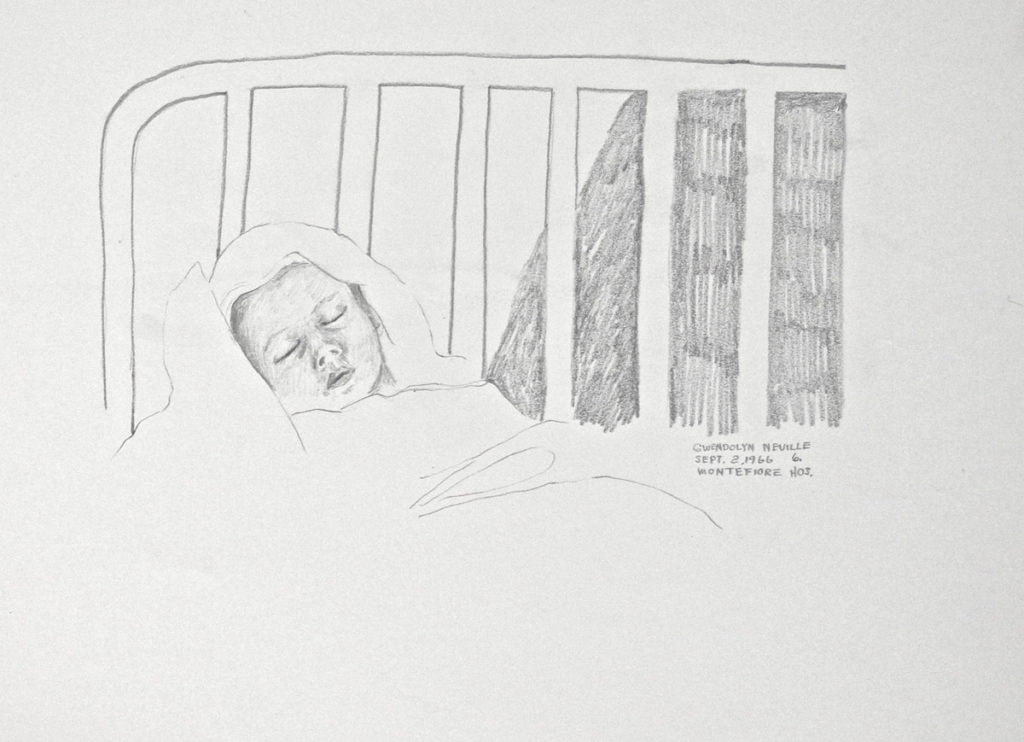 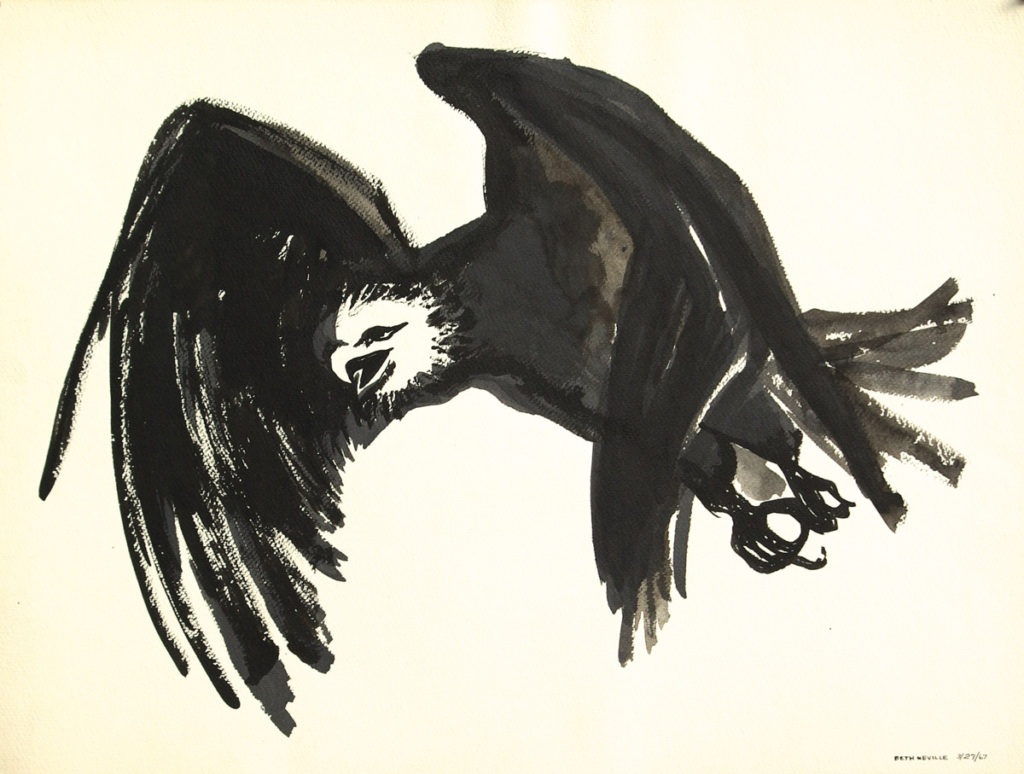 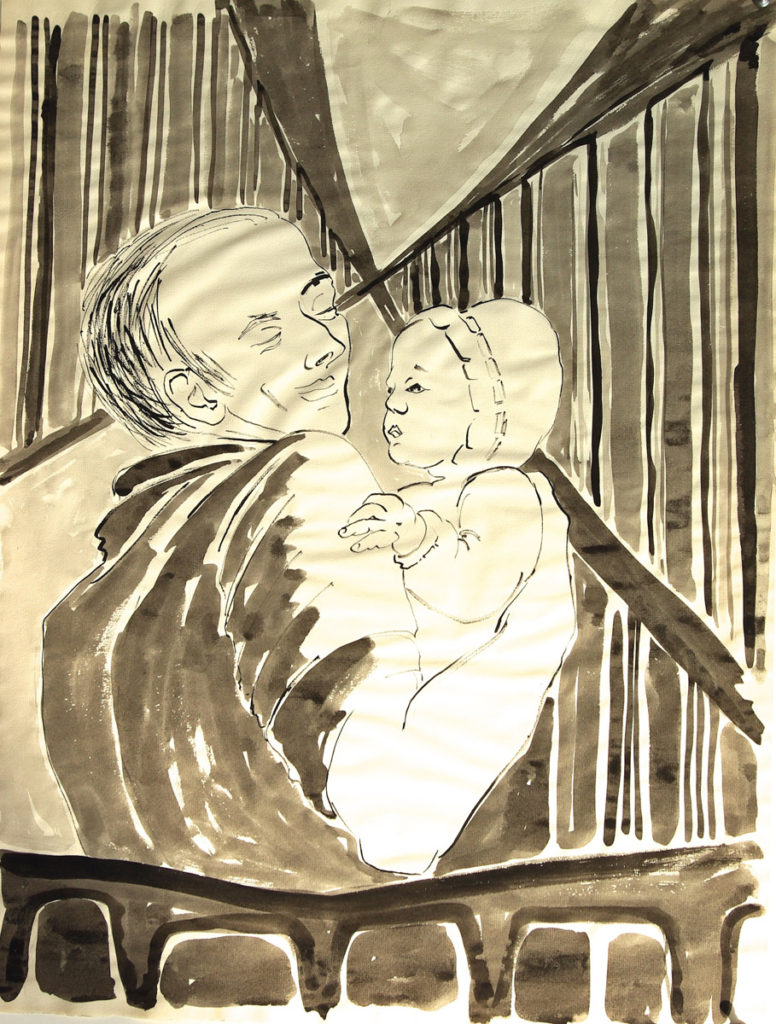 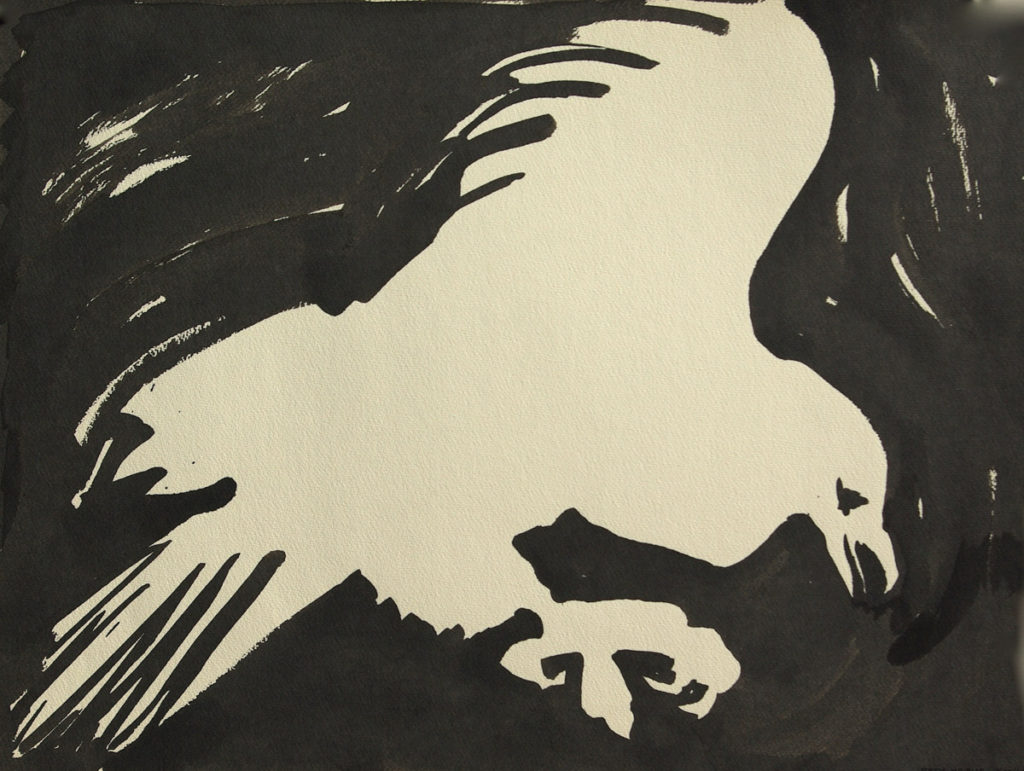 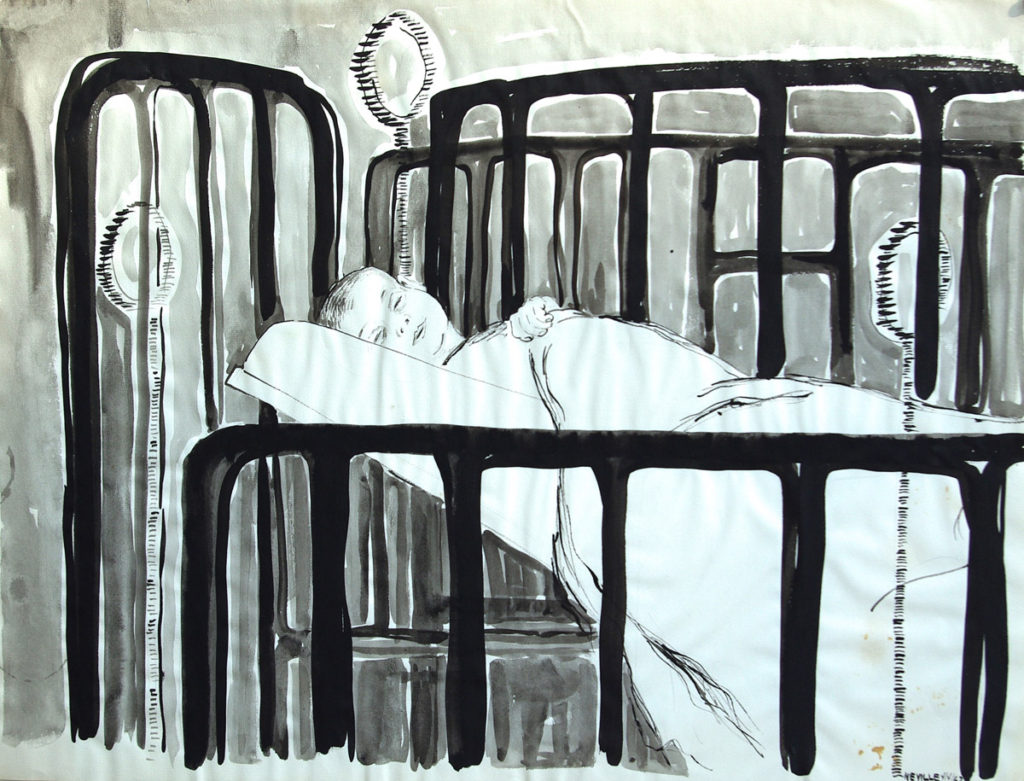 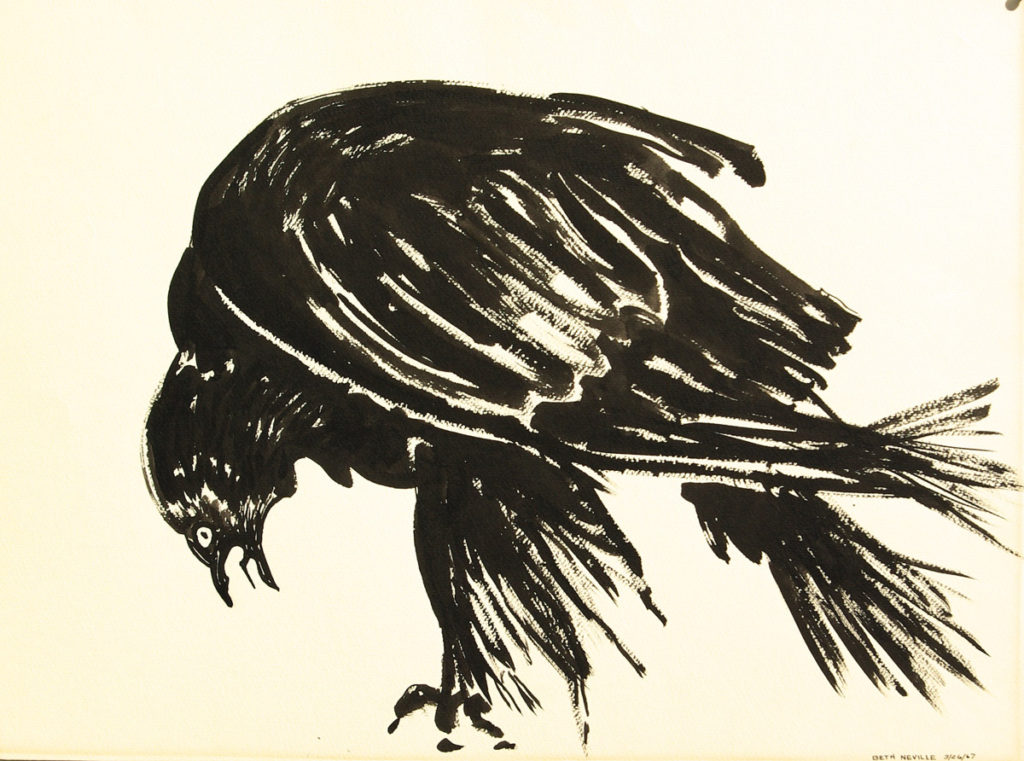 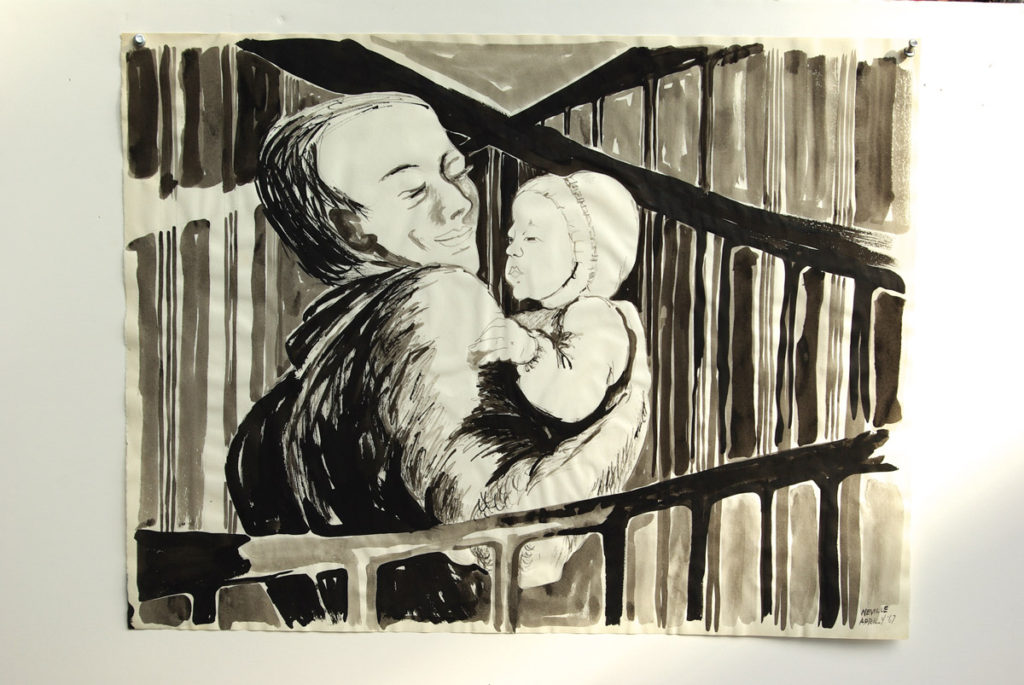 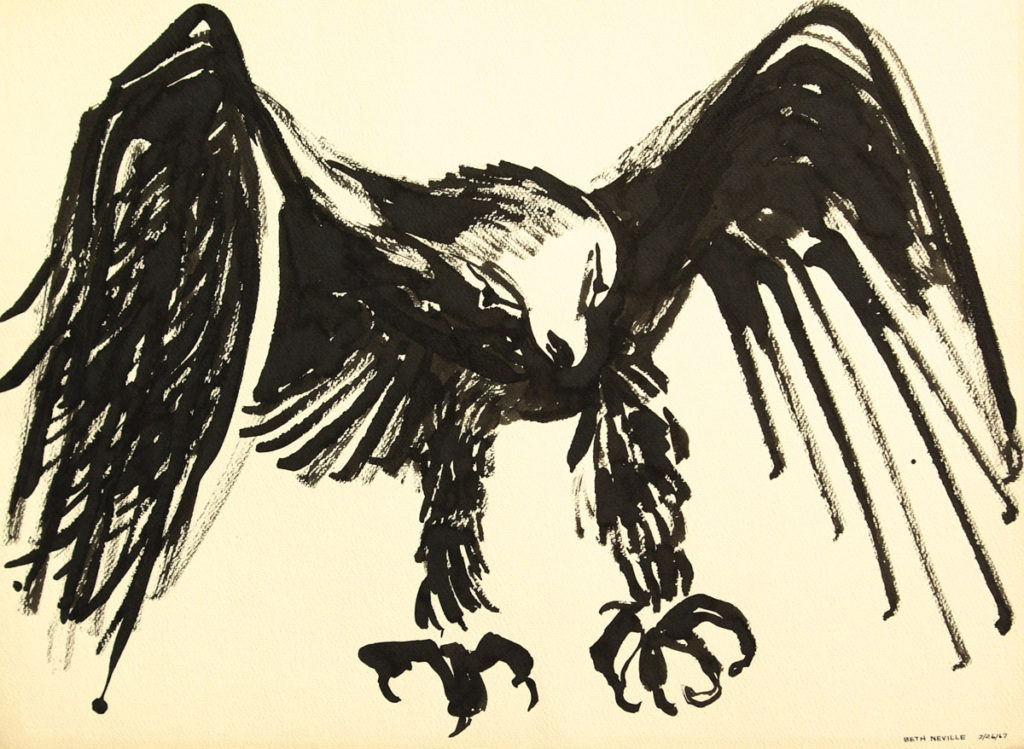 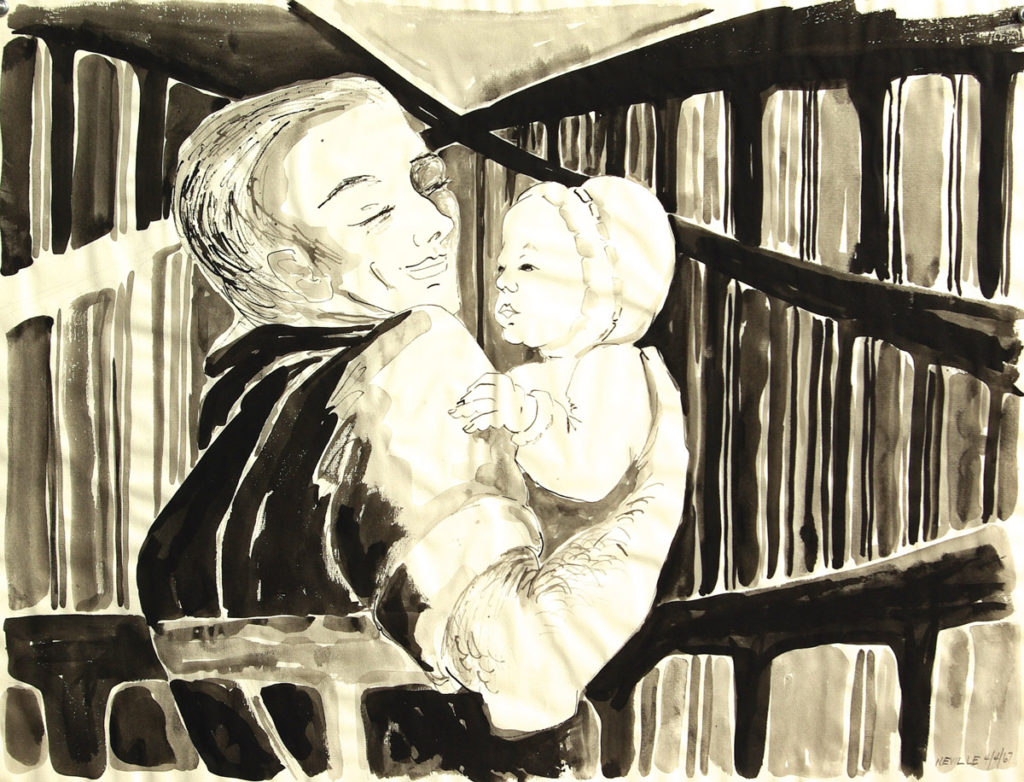 26 "Gwendolyn, Safe in Daddy's Arms," April 4, 1967,black sumi-e ink, brush on thin tracing paper,
h 18" x w 25"
Next »
Many of the works on this site are available for exhibition or sale. Please contact the artist for additional information.